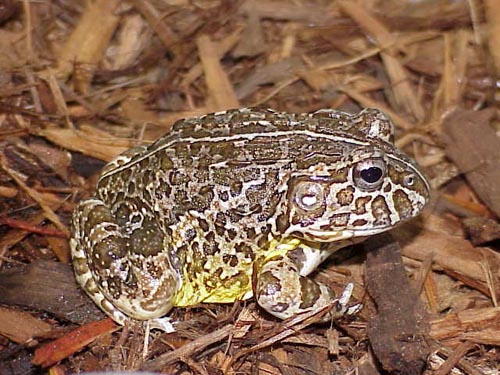 Principal kisses frog for good cause

Friendship Elementary School Principal Dennis Giancola answered that very riddle when he kissed an Argentine horned frog on loan from the Frazer Zoo last Thursday afternoon during a school-wide assembly. He promised to kiss a frog if students reached their goal of collecting 416 books to send to a school in Namimbia, Africa.

The students exceeded that goal as they collected 722 books to send to the Onangulo Combined School, a rural school in northern Namibia on the West Coast of southern Africa.

Second grade teacher Lisa Crane's daughter Thera Crane, a 1998 graduate of Coatesville Area Senior High School, is a volunteer with the Peace Corps and a teacher at the school, which has over 700 students from grades one through 10.

Students in grades one to four read and learn in their local language, Oshikwanyama, and then older students learn to read and speak English, the official language of Namimbia.

Last year Lisa Crane said that, through the contact with her daughter, who graduated from Juanita College in 2002, Friendship students wrote letters and exchanged information about themselves with students at the African school.

Friendship also collected money to help the school a library. In return, Onanghulo students sent traditional baskets and a cup made at the school as a taken of their thanks.

"Before that, they just had a closet for a library," said Lisa Crane. So Friendship along with two local churches, Olivet and Chatham United Methodist churches, collected over $3,000 for building materials for the library.

The library is currently under construction, she said. "Then we realized that they had a library building, but no books, so we decided to collect one book for every child here," she added.

The collection started Jan. 20 and went until Feb. 20.

Students also donated a dollar to cover the cost of shipping the books, and promoted the program as a book and buck for Africa. "The kids were really excited," said Lisa Crane. She added that the school actually collected more than $722 with people handing her checks throughout the day Thursday.

"I was very excited," said Jennifer Jones, 8. "I brought about five or six books." Among them, she said, were two Rug Rats books, one scary book and one funny book.

She said at first, she didn't think that Giancola actually would kiss the frog. Also at first, to get the students' excitement level to a fever pitch, Giancola and his staff teased the students' expectations by bringing out different frogs: from a teacher named Mrs. Froggett to his wife wearing a frog hat to him giving a Hershey's Kiss to a stuffed frog. Each time the students booed, wanting him to kiss an actual frog.

Mrs. Crane explained that the reason a frog was chosen was for two reasons: one was because the frog's association with a leap year, the second was that in Africa at this time of year, it is their wet season.

"One morning, they'll wake up and there's thousands of frogs everywhere," she said her daughter has told her. "The kids run around and put them in bags." From there, she said the students either sell them or later eat them as a delicacy.

As for what happened to the frog after Giancola kissed it, not surprisingly, nothing happened to it: it remained a frog.

Asked what kissing the frog was like, Giancola said he couldn't describe it. "It was too quick. I just wanted to give it a peck," he said. "I was happy to do it for the kids."

This story has been posted in the following forums: : Headlines; COS - Namibia; Literacy; Humor; World Wise Schools; Frogs