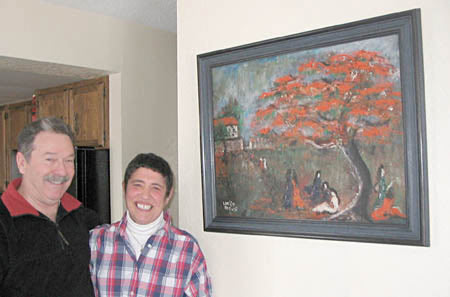 They managed to find love before Saigon fell


Brenda and Hal Rodgers remember the good, bad and inexplicable

By NEIL ZAWICKI
For the Alaska Star


STAR PHOTO BY NEIL ZAWICKI
Hal and Brenda in their Eagle River home next to a painting Hal bought for Brenda at a Saigon cafŽ. The painting was done by a South Vietnamese soldier and is painted on a piece of American tent canvas.
Brenda Rodgers met her husband Hal in 1968 while carrying a drunk colonel up some stairs in Saigon. No word on the colonel, but the Rodgers are still married and living in Eagle River.

"I wanted a challenge," Brenda said of her three years as a health education coordinator with the United States Agency for International Development in the South Vietnamese capitol. "And I was 29, I was an old maid, and I knew there were 500,000 American men over there."

Brenda was no stranger to service overseas; she served in the Peace Corps in Brazil prior to her work in Vietnam. But she admits she had next to no idea exactly what was happening in Vietnam at that time - other than that there were Americans fighting there.

She lived in a hotel with other USAID workers, in the heart of the city, and found herself confined to her room during the 1968 Tet Offensive, during which the American embassy in Saigon was overrun by Viet Cong troops. She kept a journal of the days of the offensive. The entries reveal a young woman caught in a critical place during a critical time.

"It's no joke. The sky is buzzing with choppers. The rooftops are covered with crazy American civilian sightseers and military guards. Every now and then there is a round of fire or a mortar shell. A couple must have hit, because there are two visible fires underway...."

Brenda said she and her fellow workers didn't know at the time the extent of the attack, because all their reports were from Armed Forces Radio. Still, she remembers the danger, and said she had friends who went out to the store and just never came back.

"I still jump when I hear a loud bang," she said. "At the hotel, and (later) at my (Saigon) apartment, there were many nights I slept under the bed."

Once the Tet Offensive had been repulsed, Rodgers and her buddies had some time to socialize. At a party at a nearby U.S. training school, she found herself carrying the aforementioned drunk colonel with Hal, then an army infantry officer.

"I looked over and saw Brenda sitting there in a little mini skirt," Hal said.

"You had to move fast at those parties," Brenda said. "I remember when we were carrying (the colonel), he looked up at me and, slurring his words, said 'Brenda, this is the man for you. You're gonna marry him.'"

For their second date, the couple went for lunch at a cafŽ, which Hal said had recently been bombed by the Viet Cong.

"So it was real high risk and exotic," he said.

"Yeah, and you wore those awful khakis, when I thought you looked so much better in your fatigues," Brenda said.

Hal and Brenda were married in April 1970 at Saigon city hall, and then honeymooned at the American base At Nha Trang. They flew there on a CIA-run airline, and checked in under false orders.

"We got there and had bunk beds," Brenda said, "But some of the doctors traded with us and gave us a double bed."

Brenda said every time she went to visit her new husband at his base, the base would get mortared. So, thinking she was a jinx, Hal's commander decided to let him go into town to visit Brenda.

The love Hal and Brenda found during the war to this day is augmented with the memories and feelings of their time there.

"Hal once flew on a plane full of corpses that were Air Force guys I'd gone to Hong Kong with," Brenda said.

Brenda recalled the time her friend and colleague, Dr. Cahn, witnessed a bombing and drove over to help the victim - a young Vietnamese woman.

"I held her head together on the way to the hospital, and she died," Brenda said through tears. "Did I ever tell you that, Hal?"

Hal's memories are those of a military veteran.

This story has been posted in the following forums: : Headlines; COS - Brazil; Vietnam