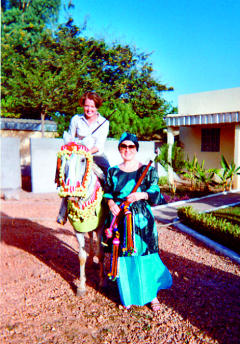 Caption:Angela Delp, mounted on a horse, and Constance Konold pose for a photograph in Garoua, Cameroon.

Constance G. Konold is a graduate of St. Mary's Academy and holds a master's of arts in teaching from the University of Notre Dame. She is currently a communications consultant and life coach living near Paris.

She can be contacted at The Satellite Crew: ckonold@satcrew.com. - - The editor

"Just before the phone rang, I said to myself that I really needed a sign."

In December 2003, I made a sentimental trip back to my former Peace Corps posting in Central Africa. Comparable in population size only to my hometown of South Bend, the city of Garoua and the village of Pitoa where I had taught English are dusty sub-Saharan outposts cornered by Nigeria, Chad and the Central African Republic.

Thirty-five years ago, joining the Peace Corps was so daring for its time that I knew I was doing it over my father's protests from the grave. Friends were impressed when FBI agents called on them to check my references. I had recently earned my master's degree from the University of Notre Dame, but when I was assigned to "the Cameroons" (those recently joined French and English colonies were once known as that), I thought I was headed to islands in the South Pacific rather than a country in Africa.

From 1969 to 1971, I survived without a telephone. I had dutifully written letters home once a week, and, in return, I found flimsy aerograms in my Garoua bote postale.

I had a cell phone with a local Cameroon number for my return to Garoua. So when my hosts announced that the "lamido" -- or traditional noble chieftain -- was sending his "djagui en lamido" -- or personal warriors -- over to greet me, I randomly dialed a local Peace Corps number and said to an unsuspecting volunteer, "I'll pick you up in an hour." I didn't know then that my call was "the sign" that volunteer Angela Delp had been waiting for.

During my time in Garoua, I saw the lamido's troops only once. Now, I was deeply honored that the new lamido thought my return was significant enough to merit a private audience. And I was determined to share this exceptional experience with a total stranger who was also, in some odd sense, my spiritual daughter. I also was curious to see how a latter-day Peace Corps volunteer lived.

My arrival -- just as Angela was finishing her first three months of Peace Corps service -- was portentous. I was amused and alarmed to see her mirroring events and emotions I had experienced. I found myself parroting Peace Corps Proverb No. 1: Stick out the hellish first three months and be rewarded with a lifetime of heavenly memories. I skipped the corollary to that which is: You can never go home to mall-heaven again. This she will learn in two years when erstwhile friends will inspect her as an oddity from a safe distance and her family, after an initial attempt at enthusiasm, will eventually change the subject whenever Cameroon is mentioned.

When we met, Angela, who hails from Greenwood, Ark., was suffering from Peace Corps doldrums. A volunteer's mother had just been trampled to death by an elephant in the nearby bush. Five volunteers had just been sent home HIV-positive. She was underemployed with only eight hours of work per week, teaching math and biology in English at the Garoua high school. And when she taught, she had to deal with 60 students per classroom. She was trying to fill time by learning the Fulani language, Foufulde, or improving her French.

Pretty, slim, bright and blonde, she was also dealing with the frustrating realization that platonic friendships are deemed fairy tales in this culture where polygamy is still condoned. And there didn't seem to be any potential women friends beating a path to her door. Angela also was upset that the locals labeled her "nasara" or foreigner. That very morning I had been thrilled to be greeted by "Nasara! Nasara!" as I strolled the legendary Pitoa market, a weekly crossroads of Hausa, Fulani, Fali, Kirdi and M'Bororo ethnic groups. With time, Angela will learn that nasara is not pejorative but merely descriptive.

She will learn how to feel comfortable being the only white face in the crowd.

Despite the physical and emotional challenges of Peace Corps service, I told Angela that those two years were the best and most informative of my life. I wanted to take myself totally out of context to test my mettle, to find out if I was a survivor without the framework of my family and community. I gained a clear view of myself and my country from a new perspective, through a different ethnic and cultural lens. What I learned gave me the self- confidence and flexibility to live a fascinating existence in many foreign countries on several continents with people from all walks of life. I also gained in friendship thanks to my Peace Corps volunteer network which, to this day, remains a precious touchstone for me in the U.S.

while I continue to live abroad.

Since our meeting, Angela has decided not to throw in the towel. She has come to see Cameroon as one of the most hospitable countries in the world and that it is possible for Cameroonians to excel intellectually and professionally.

She realizes how important her presence is for the education of the locals. And while I continue to advise her through e-mails, I also learn from her reports about education and attitudes in Cameroon. This has spurred me and my Returned Peace Corps Volunteers group to explore launching a private project to foster further support for the Cameroonian people. We are coming full circle.

It is curious that the Peace Corps and the Green Berets were both signed into existence by the U.S. Congress on the same day in 1962. It is sadly coincidental that Angela and I both started our Peace Corps service during wartime. Out of my group of 23 volunteers, 15 were men avoiding the Vietnam draft. Fortunately for Angela, the current war in Iraq does not appear to be front page news in Garoua, and the local Muslims practice a "soft" Islam that they are quick to differentiate from the fundamentalism sometimes seen in the Middle East.

The Peace Corps mission in Cameroon has changed significantly since my day. With anywhere from 134 to 200 volunteers at one time in Cameroon -- easily twice or triple what it was in 1969 -- it is the second largest Peace Corps posting site in the world. My skill, teaching English as a foreign language, has been replaced by teaching English to prevent AIDS. The four other poles are now math, science and computer technology; small enterprise development; health, water and sanitation; and agro-forestry. The oldest volunteer is 77.

"Sustainability" is the buzzword, and all volunteers have to train a local counterpart to take over their functions when they leave. A full-time staff of 38 -- mostly Cameroonians -- now supervises the organization that was once governed by a handful of Americans. Since 1962, at least 2,700 volunteers have been through Cameroon.

The new breed of volunteers, many of whom are mall-trained and addicted to the Internet, are apt to complain if they so much as lose cell-phone service. My generation-old tales of having to harvest peanuts with a machete, deal with hot- and cold-running cockroaches, learn to dunk eggs in a bucket of water to test for freshness, buy live chickens rather than possibly tainted butchered ones, and not think of the flies that had swarmed on the gorgeous pieces of beef fillet on my dinner plate might now be nothing more than engrossing hardship stories used as a Peace Corps leadership tool.

But even if creature comforts might have improved for Peace Corps volunteers today, the experience is as culturally challenging as before. Today's volunteers span a broader age and skill level than in my day, which can only enrich the experience for host countries and increase the benefits for the United States when those model mentors come back home.

I hope the U.S. "melting pot" is better able to assimilate its returned volunteers now than in my day.

And that Angela will enjoy an audience eager to hear her Cameroon tales when she returns to Greenwood, transformed, informed and worthy of esteem for having had the courage to live out her dream.

Angela Delp can be contacted in Garoua at amdelp@msn.com.

This story has been posted in the following forums: : Headlines; COS - Cameroon; Return to our Country of Service - Cameroon