Norah Dunn returned to Pomperaug with her own stories of life in the Peace Corps, speaking to Spanish classes on Wednesday, January 7, about her service as a Peace Corps volunteer in Guatemala 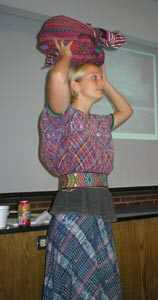 Norah Dunn returned to Pomperaug with her own stories of life in the Peace Corps, speaking to Spanish classes on Wednesday, January 7, about her service as a Peace Corps volunteer in Guatemala

PHS Alum Returns to Share Experiences in the Peace Corps

MIDDLEBURY-SOUTHBURY - When Norah Dunn was a freshman at Pomperaug High School, a Peace Corps volunteer came to her French class to talk about her service in a French-speaking country in Africa.

Fascinated with the young woman's stories of life in a third world country, she decided then and there, that was what she wanted to do.

Last week, Norah returned to Pomperaug with her own stories of life in the Peace Corps, speaking to Spanish classes on Wednesday, January 7, about her service as a Peace Corps volunteer in Guatemala.

Now 25 and a graduate of Keene State College in New Hampshire, Norah arrived in Guatemala in January, 2003.

Following a three-month training period, she was assigned to live and work in San Andres Itzapa, a rural town about two hours from the capital city.

Home for a three-week visit, Norah shared a slide presentation on the Central American country and spoke to students about life as a Peace Corps volunteer.

Started in 1961 by President John F. Kennedy, the Peace Corps has sent 170,000 volunteers to 132 countries in Africa, Asia, Europe, Central and South America and the Pacific Islands

Some 6,678 volunteers are presently serving, working in the fields of education, health, environment, business and agriculture.

Norah told students about the three goals of the Peace Corps.

"What I'm doing in Guatemala shouldn't end when I leave, it should be sustainable."

The second goal, she said, is to promote a better understanding of Americans in the host country. By taking part in community life, she said, she is able to dispel the myth that all Americans are as they are portrayed in movies or on TV.

The third goal is to promote a better understanding of the host country's culture among Americans. That was what she hoped to achieve with presentations such as Wednesday's at PHS, and a subsequent trip to Vermont to meet fourth graders with whom she had been corresponding in the Peace Corps' World Wise Schools program.

Geographically diverse, Guatemala's climate ranges from hot and humid along the coast to quite chilly in the mountains. There are numerous active volcanoes. San Andres Itzapa is situated at the foot of Vulcan de Fuego.

"It's not a threat," Norah said. "You don't see lava pouring down the sides, but it's neat to see the smoke rise from the top."

Like most of the country, Itzapa is about evenly divided between the Ladino, who resemble their Spanish forebears and wear modern dress, and the Indigenous, who are descendent from the Maya.

For her presentation, she wore the traje, or traditional dress, worn every day by Indigenous women and girls of all ages.

The huipil is a woven blouse featuring colorful embroidery. The corte, a long piece of woven fabric, is wrapped around the body as a skirt and secured with the faja, a long fabric belt.

Both the embroidery of the huipil and the pattern of the corte are indicative of the region in which they are made and worn.

Norah demonstrated the use of a cargador, a large square of fabric folded into a sling to hold an infant or toddler on a mother's back.

"Women are expected to work all the time," she explained, "in the home, in the fields, in the market. They carry their children in the cargador, and you never hear them crying.

"I'll probably use one of these when I have children of my own," she said.
Healthy Schools
Norah's Peace Corps job is with the Healthy Schools Project, teaching health and nutrition classes at four rural primary schools.

"But everyone wants to learn English," Norah said. "After my lessons, the kids all beg me to teach them English words."

Classrooms in the photos she shared are tiny and spare. Desks consist of planks of wood bolted to rusted metal bases.

There are worn blackboards, but no technology. There is no heat; with no janitors, the children take turns cleaning the classrooms.

"The kids don't have much," she said. "I always start out by asking what they had for breakfast. They usually say bread and coffee, or tortillas and coffee.

"Some of the children have no shoes. It's very cold and damp in the mountains, but some of the little girls are just wearing their huipils, with no jacket.

"Some of the kids wear clothes that are full of holes, but they don't get laughed at. They're very kind to each other - it's not like here, where kids can be so cruel."

The Indigenous children are modest and shy.

"But they're very sweet," she said. "They're so affectionate. They're always hugging me."

The average Guatemalan has a third-grade education, Norah advised. Some don't go to school at all.

"My schools are K through 6," she said. "The kindergartens all have about 40 kids, but the sixth grades only have a handful - maybe six or seven."

Along with her lessons on brushing and flossing, hand-washing and nutrition, Norah strives to instill the importance of staying in school. But often, the children are needed elsewhere.

"Lots of times, the little girls have to stay home to take care of their younger brothers and sisters, or help around the house," she said. "The boys have to work in the fields. Their parents can't afford to give up the work the children do."

Norah shared a photo of a pig being led along the street beneath her bedroom window.

"Rural Guatemalans depend on agriculture for their living," she said. "My street leads up into the mountains. I see cattle, horses, pigs, all sorts of animals being herded by my house."

Like many Peace Corps volunteers, Norah has no running water inside her home. She has an outdoor pila, a crude cement sink common in Guatemala and other Central American countries.

The pila is comprised of a large central basin and two shallow basins with drains. Washing is accomplished by dipping a small bowl into the central basin and pouring water - when available - over dishes, hands, etc., on the flat area.

"This is where I brush my teeth, wash my face and hands, wash my dishes and do my laundry," she said. "But I don't drink this water."

Inside her home, the kitchen consists of a two-burner gas stove, a 10-gallon water jug and a table and chairs.

"This is pretty typical of a Peace Corps kitchen," she said.

Rural women bring fresh produce to the market in the center of town daily.

"They walk down the mountain, about three miles, at 5 o'clock in the morning," she said. "They wrap their fruit and vegetables in a cloth and carry the bundle on their head."

She has no refrigerator, but since the market is only a block from her home, she always has access to fresh produce, she said.

Norah had high praise for Guatemala's system of public transportation, a fleet of buses that serves even the smallest towns.

The system is made up of literally thousands of old American school buses. Though colorfully painted, they often retain the name of their former school system.

"The buses are great," Norah said. "I can pay 10 cents to go somewhere an hour away."

Buses depart almost continuously from a central point in each town. Passengers sit four to a seat - not counting children - balancing market goods on their laps; at busy times, more riders pack the aisles.

"Most people don't have cars, so the buses really get packed," she said. "They're well marked... It's a great system, and so inexpensive! I wish Southbury had one."
The Only Gringa in Town
Asked how important Spanish was in her work, Norah replied that she speaks nothing but Spanish all day, every day.

"I'm the only gringa in my town," she said. "No one speaks English at all. My grammar isn't perfect, but I get along very well."

Peace Corps volunteers receive intensive language training when they arrive in the host country; those who don't master the language in the time allotted are not sworn in.

Norah was already conversant in Spanish before arriving in Guatemala. After one year of Spanish at Keene, she opted for a semester in the Dominican Republic, where she lived with a family of non-English speakers and studied the language at a Dominican university.

Though language wasn't a problem, Norah told the students of other adjustments she had to make as a Peace Corps volunteer.

One of the hardest, she said, was accepting the way Guatemalans treat their animals.

She told of the many "street dogs," scruffy animals that live in packs on the streets, begging for handouts outside the meat market. Street dogs are treated even worse than family pets.

"That took a lot of getting used to," she said.

Fair skinned and blonde, Norah is painfully conspicuous as she makes her way along the streets of San Andres Itzapa.

Though of average height for an American, she towers over most Indigenous Guatemalans, men and women alike.

"It's been interesting living in a place where you're the minority," she said. "People laugh at me, people stare at me. They call me 'pale girl.'

"But I know they don't mean any harm, that's just the way their culture is. It's definitely been a learning experience.

Living in the midst of a culture so unlike her own has been the fulfillment of a dream, she said.

"That part is so much fun," she said. "Whether you join the Peace Corps or just do study abroad in college, it's a great experience."

Asked what was the best part of her Peace Corps experience so far, Norah spoke of learning, of friendship, of challenges met.

"I feel very confident in my Spanish now," she said. "That was always a goal of mine. And it's been amazing getting to know the Indigenous culture.

"I have a very dear friend, an Indigenous woman who's my age. Our lives are so different, but we're very good friends.

"I like to challenge myself," she said. "I like to put myself into situations that help me grow. The Peace Corps has helped me grow as a person."

To learn more about the Peace Corps, visit www.peacecorps.gov.

Norah Dunn is the daughter of Carl Dunn and Voices reporter Jean Dunn.

This story has been posted in the following forums: : Headlines; Third Goal; COS - Guatemala