New blast reported in Uzbekistan after two days of attacks 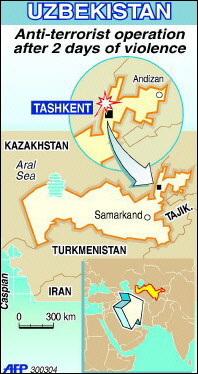 New blast reported in Uzbekistan after two days of attacks

Caption: Map of Uzbekistan showing location of attacks and shootouts which have left more than 40 people dead as Washington offered help to its key ally in Central Asia.(AFP)

The blast happened in southwestern Tashkent and according to the Interfax news agency caused an unknown number of casualties.

The explosion came after Uzbek authorities reportedly detained 30 people on suspicion of involvement in a series of attacks that shook Tashkent and the ancient city of Bukhara on Monday and Tuesday.

"There was an explosion in an ordinary house in the street," one bystander told an AFP reporter on the scene."I think police officers were chasing about four people."

"There was shooting and then two booms," said another resident, Aziz.

Police cordoned off the area, in Tashkent's historic Sabidrakhimovsky neighborhood of residential one to two-story houses.

News agency reports of the detentions could not be independently confirmed although rights groups have warned that a crackdown on Islamists may follow the violence.

Security was tight in Tashkent throughout Wednesday, as car traffic petered out and armored personnel carriers and soldiers in body armor guarded the sites of the latest wave of violence amid fears of more attacks.

Schools and universities were ordered to remain closed Wednesday, the border with Tajikistan remained shut for a second day and media reported that the border with Kyrgyzstan had been closed as well.

The two days of attacks were mostly directed against police targets and were the deadliest to hit the former Soviet republic -- a key US ally whose hardline leaders have for years waged a campaign against Islamic insurgents. They were also the first to be carried out by female suicide bombers.

The capital bore the brunt of the strikes, including a spectacular siege between police and suspected militants near the president's residence, two suicide blasts in the city center and car bombings at two police checkpoints on the outskirts.

Authorities have blamed Islamic extremists and rights activists feared a backlash against practicing Muslims in the country, whose authorities are often accused of human rights violations.

"Our concern is that we're going to see the same kind of intensification of massive sweeps of peaceful Muslim dissidents, as we saw after 1999," said Acacia Shields of US-based Human Rights Watch.

She referred to the last attacks to hit Uzbekistan, when a wave of explosions in Tashkent killed 16 people. They were blamed on the Islamic Movement of Uzbekistan (IMU), which was then based in Afghanistan (news - web sites) under the protection of the since ousted Taliban regime.

After the 1999 attacks, police rounded up hundreds of practicing Muslims, often accusing them of being members of Hizbi-Tahrir, a group that advocates peacefully setting up an Islamic state and is banned across Central Asia.

Meanwhile US Secretary of State Colin Powell (news - web sites) called his Uzbek counterpart Sadyk Safayev on Tuesday to offer US help in the probe into the attacks, the State Department said in Washington.

Powell "offered US assistance in the investigation and the minister expressed appreciation for the offer," spokesman Richard Boucher told reporters. "Our embassy in Uzbekistan will be following up in more detail with them."

Uzbekistan became a US ally after the September 11 attacks in 2001, opening up its main military base to US troops fighting in neighboring Afghanistan.

Attacks on Tuesday left at least 20 suspected militants and three policemen dead after a gunfight on the outskirts of Tashkent, according to the interior ministry. Several policemen and civilians were also killed in car bombings at two nearby checkpoints, witnesses told AFP.

This story has been posted in the following forums: : Headlines; COS - Uzbekistan; Safety and Security of Volunteers