Nepal RPCV Laurence Leamer to talk about 'Sons of Camelot,' his latest book on famous family 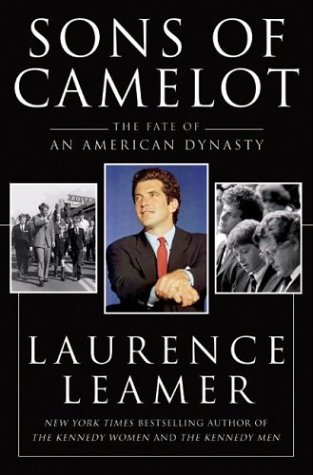 Nepal RPCV Laurence Leamer to talk about 'Sons of Camelot,' his latest book on famous family

Laurence Leamer to talk about 'Sons of Camelot,' his latest book on famous family.

That's because there's quite a story to tell, the Palm Beach resident said.

"There's more tragedy than Shakespeare, more drama than a classic Greek play. The drama there is overwhelming," he said.

Leamer — whose most recent work, Sons of Camelot: The Fate of An American Dynasty, came out this week — will be the guest lecturer at the next Books of America author series.

Leamer will speak from 5 to 6:30 p.m. on March 31 at the Kravis Center's Cohen Pavilion. Third in a series of author lectures, the event is free and open to the public.

The author's works include biographies of Johnny Carson, Ingrid Bergman, Ronald and Nancy Reagan — and, of course, the Kennedys. His first, The Kennedy Women: The Saga of An American Family, was a comprehensive biography drawing on unpublished manuscripts and exclusive interviews with Kennedy colleagues and friends. The book reached No. 2 on The New York Times bestseller list. He followed it with The Kennedy Men: 1901-1963.

The story of the political family is "truly an American story," Leamer said. "It's an immigrant's story, about an Irish family that comes to this country and realizes the American dream on a grand scale."

For his lecture, Leamer will discuss Sons of Camelot, released March 15 by William Morrow. In the book, Leamer explores the lives of the Kennedy sons and grandsons in the aftermath of the assassination of JFK, focusing particularly on John F. Kennedy Jr.

"All of John's close friends cooperated with me," Leamer said. "I never interviewed anybody the way I interviewed them. We cried, we laughed, we argued. They all read the manuscript and added or subtracted something if they thought it was important."

Leamer described many of the stories circulating about JFK Jr. and his wife as "mean gossip" divulged by poseurs and hangers-on.

JFK Jr., he said, inspired fierce loyalty in his friends, all of whom refused to cooperate with other authors.

Leamer said he was sure that JFK Jr.'s future lay in the political arena.

"He had such potential," Leamer said. "He most certainly would have run for office in 2000."

The author also interviewed other members of the family "that largely reinvented modern American liberalism," according to a publisher's press release.

In Sons, Leamer writes, "It is a startling tale as these men walk through the fire of lives as Kennedys. They were brought up not to be afraid. They could not allow themselves to acknowledge their fear. If they believed in a common dark destiny, then they would not have to be responsible for how they lived their lives. No matter what they did, who they hurt, how much they faltered, they were not to blame. They were only playing out their preordained destiny, their knees buckling under the burden of inheritance that they bore."

Leamer, who divides his time between Palm Beach and Washington, is at work on his next project, a biography of Arnold Schwarzenegger.

The event is sponsored by Bank of America and the Palm Beach County Cultural Council. For more information, call 471-2901 or visit www.pbccc.org.

This story has been posted in the following forums: : Headlines; COS - Nepal; Writing - Nepal; President Kennedy; Peace Corps Directors - Shriver