After an advocate's killing, Iraqi women try to stay course 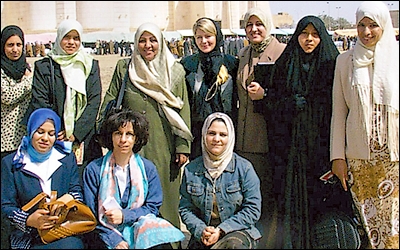 Caption: 'LIKE A SISTER': On March 8, American Fern Holland (in center of back row) stood with Iraqi women from some of the four women's rights centers that she helped start. The next day, she, her Iraqi deputy, Salwa Ourmashi (front, no scarf), and coalition press officer Robert Zangas were assassinated. HILARY WHITE/COALITION PROVISIONAL AUTHORITY


Read and comment on this story from the Christian Science Monitor on Namibia RPCV Fern Holland who was one of the three NGO workers who were killed in Iraq on March 9 when their car was forced off the road and machine-gunned. Coalition officials call the murders an assassination, but hesitate to conclude whether the three civilians were targeted for promoting women's rights or as part of a larger campaign against Americans and Iraqis who work with them. Many large international aid groups, including most of those with women's programs, have already withdrawn international staff because of attacks against aid workers. Now the few remaining women's groups fear they will be next. Read the story on the work that one RPCV was doing to help Iraqi women before her murder at:

After an advocate's killing, Iraqi women try to stay course*


After an advocate's killing, Iraqi women try to stay course

By Annia Ciezadlo | Correspondent of The Christian Science Monitor

KARBALA, IRAQ – For their new women's center, the women of Karbala chose the name of a warrior: Zainab al-Hawraa. Sister of the Shiite martyr Imam Hussein, Zainab fought alongside him in 680, saving his young son and his legacy for future generations.

When Fern Holland heard the story, she laughed and told the women, "We want all Iraqi women to be just like her."

Ms. Holland, a young lawyer from Oklahoma, was women's rights coordinator of Iraq's Shiite heartland for the Coalition Provisional Authority. She helped write the part of the new constitution addressing women's rights. To the women in Karbala, she was "just like a sister."

Coalition officials call the murders an assassination, but hesitate to conclude whether the three civilians were targeted for promoting women's rights or as part of a larger campaign against Americans and Iraqis who work with them. Either way, the killings accelerated the CPA's plan to hand over the centers to Iraqi women to run by themselves, financing their work by charging small fees for classes and renting out space. "Fern was a huge catalyst for women's rights, says Hilary White, CPA press officer and Holland's former roommate, "but the women wanted it just as much as she did."

But today, the women carrying on Holland's and Ourmashi's work are afraid.

Over the past few months, Iraqi women in public roles, especially those who work with Americans or in promoting women's rights, have increasingly become targets of death threats and assassination attempts.

Many large international aid groups, including most of those with women's programs, have already withdrawn international staff because of attacks against aid workers. Now the few remaining women's groups fear they will be next.

"We are all targets, women and Americans alike," says Yanar Mohammed, a newspaper editor and outspoken feminist. "There are many women activists, but they cannot speak boldly against political Islam."

Ms. Mohammed has received several death threats from a militant Islamic group called Jaish al-Sahaba, Army of the Prophet's Companions, for her opposition to Islamic law.

"If you do not ask forgiveness, then you are an apostate and should be killed by Islamic law," read the first threat, quoting a verse from the Koran that promises death or crucifixion for those who spread sins on Earth.

Mohammed is a socialist, a defiantly secular voice against sexual taboos. But even devoutly religious women who wear the veil aren't safe: Raja Habib Khuzai, a Shiite member of the US-appointed Iraqi Governing Council, received threats after voting against a controversial measure that would have replaced Iraq's civil personal status laws with Islamic law, or sharia.

At the Karbala center, the women are hardly opposed to sharia - most of them wear the maqna, a veil so concealing it even covers their chins. But they are determined to recapture a role in the city's teeming civic life. 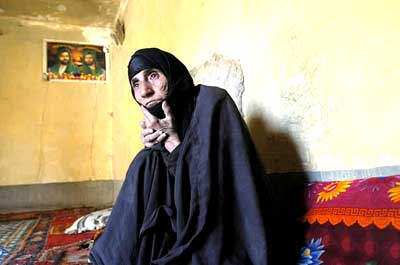 "I came to this center because I wanted women to have a role in this community, because we are more than half the community," says Amal Omran, a young veterinarian. "And I think it's our reward for not having anything before."

Under Saddam Hussein, women enjoyed civil protections that were relatively advanced for the Arab world, a legacy of the pre-Baathist monarchy. But after the Iran-Iraq war of the 1980s, Mr. Hussein began courting Islamic hard-liners, segregating schools and decriminalizing polygamy and honor killings.

After the 1991 Gulf War, women in Iraq's Kurdish-controlled north were able to pass laws protecting their rights, including one that outlaws honor killings. But in the rest of Iraq, Hussein's reign of terror led men to clamp down on women - especially in the south, where Hussein executed tens (possibly hundreds) of thousands of Shiites, mostly men but also women.

Today, women make up about two-thirds of southern Iraq's population. Yet they are largely absent from public life. Holland wanted to change that.

"Her whole push was for the centers, so that the women in the south wouldn't be forgotten," says Manal Omar, the Iraq coordinator of Women for Women, a non-profit group dedicated to helping women in former war zones become self-sufficient.

With Ourmashi, Holland opened four women's centers in Iraq's south-central region, all offering classes in computers, catering, sewing, and other skills designed to help women support themselves. They were planning three more.

"She was the one who suggested that we open a center for women," says Amira Salih, who met Holland while volunteering for Human Rights Watch. "And I told her about this building, which used to be for women in the time of Saddam."

After talking to the mayor of Karbala, Holland reclaimed the building from the Shiite Dawa Party, which had occupied it after the war. 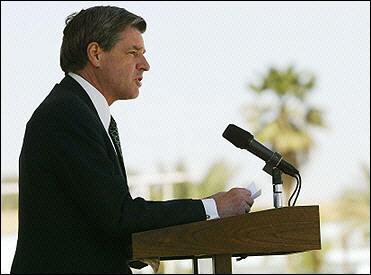 On Feb. 16, US administrator Paul Bremer showed up to open the center. "Iraq is full of hope," he told the women, "and I know you will succeed." Bremer's mere presence was enough to irk some Shiite clerics. "The development that the center is bringing, the new technology, it serves all of the people," says Sheikh Khidayer al-Ansari, manager of the Karbala office of firebrand Shiite cleric Moqtada al-Sadr. "But I object that foreigners came here to open this center."

There was trouble even before the center opened. Ms. Salih, the center's first manager, stepped down after repeated threats to shoot or hang her. "I talked to Salwa, and she said, 'just ignore them,'" says Salih. "But I was scared for my life."

Today, the center remains open. Children scamper down hallways lined with potted eucalyptus, while women hunch over computers in the Internet cafe. But the women inside are under siege. Many get threatening phone calls, some explicit and others unsettlingly vague. "They always say, 'Why did they choose you?' " says Badiqa al-Samawi, a volunteer board member.

On March 24, a woman came to Ms. Samawi's home, warning her to stay away from the center. "She said that this center is set up to serve the Americans - and that they are not just Americans, they are Jews, and it's not good for a woman's reputation to go there," recalls Samawi. Weeping, she begged the woman to visit the center, to see for herself. But the woman refused.

Samawi hopes the threats will ease once the Americans hand over control. But Ms. Omar and others fear that once the Americans pull out, someone - perhaps the Dawa Party, perhaps simply armed men - will try to take over the Karbala building and other women's centers. "It might not even be informal, it might even be the government itself," says Omar.

For now, the women feel isolated. Before she was killed, Holland would visit Karbala at least once a week, bringing them falafel she bought in the souks. But today, few foreigners risk the roads to Karbala. "We can't get out there because of the security risk, and it's tearing me apart, because I know Fern and Salwa would have wanted us to carry on their work," says Omar, an Arab-American whose group is one of a handful of aid organizations still helping women in southern Iraq.

But Omar is determined to go back. "Fern and Salwa bridged two completely separate parts of the world," she says, "and people who might not have stopped and thought about women in Iraq now will, because of them."

Read other stories about Fern Holland at her work in Iraq here.

I am writing a paper on Fern Hollan in a Critical Thinking class at Cerritos College, in California. I would like to know who Fren Holland really was and what were her intentions were in helping Iraq women? If you can give me any information on her for my paper that would be great. You can e-mail me at twosilly55@aol.com