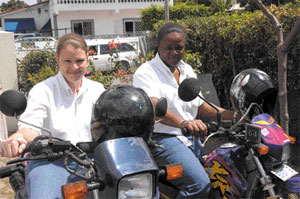 - fighting for the environment

By Indi Mclymont all woman coordinator

Caption: Carla Peterson (left) and Herma Nathan have two things in common. Both are park rangers at the Blue and John Crow Mountain National Park and both are mothers of toddlers.

The two are the only women of a five-member team of rangers that patrol and monitor the environs of the 196,000 acres (79,321 hectares) of the Blue and John Crow Mountain National Park.

Riding bikes on the narrow, treacherous trails are parts of the job the women have gotten used to.

'When I came to Jamaica in 1995 there were three women park rangers (myself included). Now we are down to two. There were seven men; we are now down to three," explained Peterson, who expressed a deep love for her job.

And love it she must - as it has caused her to spend many nights out in the wild, trying to protect some of the island's endemic species as well as risking her life to rescue hikers who have got lost.

Peterson and Nathan hike the Oatley Trail with their kids. Leading the way is Nathan's son, Marcel

In fact one particular rescue stands out in her mind.

"On one occasion we were out in the bush for three days looking for a thirteen year old boy. He was lost about six years ago," she told all woman on the 20-mile journey from Kingston. 'We were called to the area and we went out in teams - about 4-5 persons are on a team. We comb areas that the hikers would most likely go off the track.'

"In this case he had wandered off the trail. We went out to hunt for him when his group realised that he was missing. There was also a Jamaica Defence Force helicopter out looking for him.

"When he saw the helicopter he climbed a tree trying to get their attention with a blanket. He fell out and broke his ankle. When we found him we had to cut down a tree and use two pieces to make a makeshift guerney," she said. "We used a blanket we had and cut holes and used our shoe laces to secure it. Then we carried him about three miles uphill.

When we got to the trail to Portland Gap the helicopter came and got him. That was one of my more most outstanding memories."

Nathan, who has many times been on the same or similar adventures as Peterson, also had her tale to tell.

"There was one time when someone went off the trail and down a small waterfall. Initially though we had thought that the person had not gone that route but when we went further and did not find him we decided to check the waterfall," she said while playing with her son, Marcel outside the cabins at Holywell, in the hills of the Blue Mountains, 3,500 feet above sea level. "When we checked again we saw trails of him going that way, broken branches, footprints, garbage out of his knapsack - a discarded tin of sardine. It was a small waterfall so we decided to go down there to check. There was no path down so we had to rappel down the side of a rock. That was something - somewhat scary."

Included in her other adventurous moments on the job has been enforcing environmental laws.

"It is scary when you are on patrol. Sometimes you come upon guys with power saws chopping down trees and we have to take the wood away from them," she recalled. "One time they blocked a road and were waiting on us to come back that way because we had arrested a guy from the community for cutting down the trees. Luckily we had gone another route or maybe they would have mobbed us. It was seven of us on patrol and one police officer with a .38 revolver."

The rangers also check for illegal logging, dumping of garbage, hunting of wildlife like coneys and the giant swallowtail butterfly.

Nathan's duties have changed somewhat though, as she no longer patrols as often as she used to. Promoted to Station chief at the Holywell Ranger station in 1998, she has a lot more administrative work to do and no longer goes on patrol every day.

Peterson too has been promoted to an Environmental Education officer and does her ranger duties on weekends.

Both are employed to the Jamaica Conservation and Development Trust (JCDT), which is responsible for protecting the forests by posting and securing park boundaries, hiring and training park rangers and providing them with guard stations, two-way radios and vehicles, and monitoring short- and long-term changes in the park's plant and animal species.

For Peterson that means educating communities around the park on the maintenance and preservation of the endemic species in the park.

"I develop an education plan around the beginning of the year and train the rangers to go into schools and communities to give talks. Communities around the park include Irish Town, Red Light, Cascade, Content Gap, Clifton and Wood Ford," explained Peterson, who came to Jamaica as a peace corps volunteer and later stayed after the time of volunteering was up. She was born and raised in Pennsylvania in the United States and has a Bachelor of Science degree in Environmental Resource Management.

Nathan on the other hand has had most of her training on the job.

"It was my first job because after I left (high) school I had started a shop with beer and wine. It was keeping me occupied but I was not making money," she told all woman. "Then one day these guys wearing green uniforms rode up to my shop on bikes. They were speaking to me about a fire I had lit outside."

"They told me that it was illegal to light it there. We had a long discussion and they educated me about wildfires. It sparked my interest and I asked them how I could be a part of it. They gave me the information and I applied," she said.

One of the skills that she has honed on the job is riding a trail bike.

"I had a bike before but it was on the job that I learned to ride a trail bike. I taught Carla," she said. "We both live in Portmore and usually ride into Kingston every day.'

Peterson is stationed at the JCDT office on Dumbarton Road in Kingston, but rides up to Holywell and does her duties at the park mostly on weekends. Nathan however is at the Park every day. The ranger station there serves a monitoring base for the mountain retreat and there she also supervises 7 other workers.

Riding the narrow, treacherous trails overlooking precipices in the mountains is also part of the job that the women have got used to.

"Even when we were pregnant we were riding the bikes. But when we got to four months the doctor advised us not to. I had to stop because my bike had a kick start, and as my pregnancy advanced that got risky," Peterson said.

The women are not only mothering the earth but their children, as any weekend that Peterson is on duty will find her daughter Tia there with her. While Nathan does not take her son up as often, she too is ensuring that he grows with a healthy appreciation of nature.

"I have always loved nature ever since I was a child. My dad was a minister and I always thought I could see God in nature," Peterson said while trying to restrain her one plus toddler.

Both women took the all woman team on a hike up the Oatley trail - one of four at the Holywell site - that is popular with visitors.

"This is the Oatley HikingTrail. The highest point is 4395 feet and you can see many endemic plants such as tree ferns, hot lips and Johncrow nose." said Nathan, who has honed her skills as a nature tour guide over the years.

According to co-worker, David Fitz-Henley, the two women have earned his respect based on their vocation.

'I have been working with them for a year and three months. I would think that it is an uncommon job for women because of the rugged nature of the hiking and being alone up here as well as the time away from your family," he said.

This story has been posted in the following forums: : Headlines; COS - Jamaica; Parks