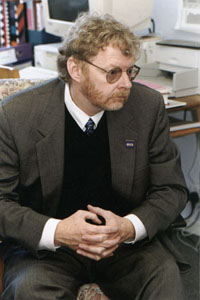 Dr. Robert Maguire became the Director of Programs in International Affairs at Trinity College in September 2000. His activities at Trinity, where he also holds an appointment as an Assistant Professor in International Studies in the College of Arts and Sciences, include the creation, administration and oversight of post-graduate and undergraduate programs in international affairs, as well as some classroom teaching.

Dr. Maguire earned a Ph.D. in Geography from McGill University, an MA in Latin American Studies from the University of Florida, and a BA in Secondary Education/Social Studies from Trenton State College, now the College of New Jersey. While at McGill University, he undertook Ph.D. field research in South Louisiana. Eventually, his research was published as Hustling to Survive: Social and Economic Change in a South Louisiana Black Creole Community (Projet Louisiane, monographie no. 2, Universite Laval, 1989).

Bob joined the staff of Trinity College following a career in federal government service as a specialist in Latin America and the Caribbean, grassroots development, and political economy. His government service included stints with the Inter-American Foundation and the Department of State, along with an earlier tour as a Peace Corps Volunteer in the Caribbean island of Dominica.

Dr. Maguire is best known for his work on Haiti, having been involved with that country since the mid 1970's through affiliations with the Inter-American Foundation, the Department of State, and Johns Hopkins, Brown and Georgetown Universities. He has been published extensively on issues of economic and grassroots development, governance and politics, the Haitian peasantry, public security, international assistance, and state/civil society relations. Among his publications on Haiti are Bottom-Up Development in Haiti (Inter-American Foundation, 1981, 2nd Edition) and Haiti Held Hostage: International Responses to the Quest for Nationhood - 1986 - 1996 (Watson Institute for International Studies and the United Nations University, 1997). Most recently, his essay, "Haiti: El Marasmo Politica", was published in Caracas in Nueva Sociedad (No. 175, Sept - Oct 2001).

From 1994 - 2001, Bob served as the Coordinator of the Georgetown University Haiti Program, supported by the Ford Foundation to serve as a vehicle for the dissemination of information and analysis on issues linked to Haiti and to US-Haiti policy. In December 2001, he was awarded a grant from the Rockefeller Foundation to continue his policy-related work on Haiti exclusively from his location at Trinity College, and to extend that work into issues related to the contributions made by Haiti and the Haitian Diaspora population to the well being of the United States (see Haiti Program). Since 1990, Dr. Maguire has served as the Chair of Haiti Advanced Area Studies at the Department of State's Foreign Service Institute. Bob is consulted on Haiti and Caribbean issues by a variety of government agencies and non-governmental organizations, and regularly makes public presentations that address issues of development in Haiti, the role of the international community, and US-Haiti policy. He has traveled to Haiti at least 100 times and is fluent in Creole.

Bob has an applied research interest in the music of the Caribbean. Among his musical compositions is "Dominica: Land of Such Beauty", recorded by the Siffleur Montagne Chorale and, more recently, by the British-Dominican group Sisserou, and played extensively on Dominica's national radio station. In 1998, Dr. Maguire joined the faculty of the Summer School of the Chautauqua Institution in New York, where he teaches an annual seminar on the Caribbean and its music.

The courses Dr. Maguire currently teaches at Trinity are:

This story has been posted in the following forums: : Headlines; COS - Dominica; International Programs; Geography