Roger K. Lewis says that the 40 Peace Corps volunteer architects in my group for Tunisia were all men 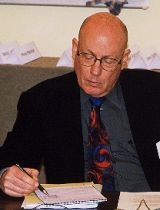 Roger K. Lewis says that the 40 Peace Corps volunteer architects in my group for Tunisia were all men

Building Careers, Despite the Barriers

March was Women's History Month. How timely that March was also when London-based, Iraq-born architect Zaha Hadid was declared the winner of the 2004 Pritzker Prize, considered by many architects to be the most prestigious -- and its $100,000 award the most remunerative --


international recognition an architect can receive for design.

The Washington Post article announcing the prize, written by Post architecture critic Benjamin Forgey, carried a headline proclaiming "Hadid Is First Woman to Win Pritzker Prize." Note that the headline delivered two distinct messages: it named the winner of the Pritzker, but emphasized that the winner is a woman.

At the beginning of the article, Forgey reported that the Pritzker jury called Hadid's career "a heroic struggle as she rose to the highest ranks of the profession." He further commented that the prize "focuses attention on the increasing stature of women in a traditionally male-dominated profession." But the bulk of the story was about the defining aesthetic characteristics of her work and nature of specific projects.

Nevertheless, I kept thinking about the other part of the story -- the struggle of women in architecture and the real challenges they face, today and in the past.

In the 1960s, when I studied architecture at the Massachusetts Institute of Technology, there was one woman in my class. The 40 Peace Corps volunteer architects in my group headed for Tunisia were all men. Before the 1970s, few women pursued careers in architecture. Women were scarce in architecture offices and even scarcer on school faculties. I knew of only one woman in Washington with her own firm: Chloethiel Woodard Smith.

Women were not encouraged to practice architecture. Worse still, they were sometimes actively discouraged by parents, spouses, teachers, professors and architects. There were lots of reasons: the education is too long and arduous; the work is too technical; the profession is too competitive and risky. What were the chances that a woman had both the stamina and the requisite engineering and aesthetic talent?

The subtle cultural signals were that women -- the gentle sex, the nurturers, the gathers and not the hunters -- were psychologically and physically unsuited to be architects. It was a testosterone thing.

How could a woman be expected to venture onto a construction site with all those male workers uttering profanities, whistling, making disrespectful remarks and, worst of all, refusing to accept guidance or instructions from a woman? Why would a woman want to run around in the mud, climb ladders, argue with superintendents or wear hard hats?

Then there is the family thing.

How on earth could a woman be a fully engaged, responsible architect, working sometimes 50 or 60 hours a week, while also caring for a husband, bearing and raising children, keeping house and cooking meals for family and friends?


Such were the arguments against women going into architecture.

Fortunately, things have changed, but not everything.

In architecture schools today, there are as many female students as males. Architecture offices are now filled with women, and the owners or partners of many firms are women. Increasing numbers of women teach architecture, although faculties are still mostly male. In the United States, women increasingly hold national, state and local leadership positions in the American Institute of Architects and routinely receive professional recognition in the form of design awards or election to the AIA College of Fellows.

As in many careers, one challenge remains, always faced by women and unique to women: balancing professional and maternal motivations. After finishing architecture school and working for a number of years, women can feel torn between the demands of practice and the desire to have children. Even with all the tools and tactics now available to ease the burden of managing a household, including sharing household tasks with a partner, only a woman can become pregnant, give birth and nurse infants.

Consequently, many female architects with families find themselves in middle age, no longer worrying about child care, but professionally not where they would have been had they not interrupted or slowed down their careers to bear and raise children. Reestablishing a full-time career at age 40 or 45 is an uphill battle for anyone, male or female.

Some female architects avoid the career-vs.-family challenge by opting out of marriage and motherhood, just as some men are married wholly to their work. It can be a very difficult choice, yet it's clearly a choice that can reduce some sources of stress while enhancing professional potential.

This is all the more reason to especially admire those professional women who have succeeded in being dedicated architects, wives and mothers simultaneously. They may not all win the Pritzker Prize, but they deserve recognition nonetheless.

Roger K. Lewis is a practicing architect and a professor of architecture at the University of Maryland.
< Back 1 2
Print This Article

This story has been posted in the following forums: : Headlines; COS - Tunisia; Architecture; Women's Issues