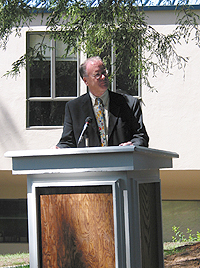 Dubbed “the toughest job you’ll ever love,” the Peace Corps lived up to its name on Monday as former volunteers—including U.S. Rep. Sam Farr--gathered for the unveiling of a Peace Pole at Merrill College.

The gift honored the tradition of Peace Corps service among UCSC graduates, and the close bond with Merrill College, where Peace Corps recruiters have been based for 15 years. More than 500 UCSC graduates have served in the Peace Corps, and the campus has long provided more volunteers than many much-larger institutions.

“We’re proud to be one of the highest contributors to the Peace Corps, but we’re more proud that our students hold in their hearts the commitment that the peace pole represents,” said Acting Chancellor Martin M. Chemers.

He acknowledged the inspiration of Professors John Isbister and John Schechter, whose work with students in the colleges underscores this commitment.

Chemers also cited the influence of the Center for Justice, Tolerance & Community, the emphasis on themes of global perspectives at College Nine, and social justice and community at College Ten as examples of UCSC's commitment. While dean of Social Sciences, Chemers was instrumental in the development of Colleges Nine and Ten. He noted that earlier in his career he worked with Peace Corps volunteers headed to Iran.

Rep. Farr reminded the crowd what it was like to join the Peace Corps in the 1960s, when travel abroad was much less common. “To go into the Peace Corps was an incredible adventure. It was a great time in my life.”

Farr said his work with city government in Colombia was crucial in his decision to enter government service after his return, in order to “petition government to right wrongs.” The Peace Corps is an invaluable resource in helping understand other cultures, he said. “There’s nothing that’s going to teach Americans better about the cultural divide.”

Farr asked other former Peace Corps volunteers in attendance to help him unveil the peace pole, inscribed with “May Peace Prevail on Earth” in English, Spanish, Tagalog and Quechua. Quechua is the largest Native American language spoken in the Western Hemisphere. The choice of languages to include was made by Merrill College’s student government.

The peace pole will be in good company at UCSC; there is a peace pole at College Nine and College Ten, and also at Oakes College. The World Peace Prayer Society estimates that there are more than 200,000 Peace Poles in 180 countries around the world, designed to “serve as constant reminders for us to visualize and pray for world peace.”

“It’s a wonderful day for Merrill College,” said Provost Schechter, who also served in Colombia in the Peace Corps, and coordinates the college’s Peace Corps activities. “The Peace Corps changed my life completely,” he said, noting that it was because of that experience that he now teaches Latin American music at UCSC.

Santa Cruz Mayor Scott Kennedy said monuments such as the peace pole are a reflection of the community that places them. “I think the Peace Pole is especially fitting for Merrill College,” he said.

Adding to the global atmosphere of the outdoor event was the music of Voces, a Latin American ensemble, which performed before and after the ceremony. The student ensemble is directed by Diana Nieves.

This story has been posted in the following forums: : Headlines; COS - Colombia; Congress