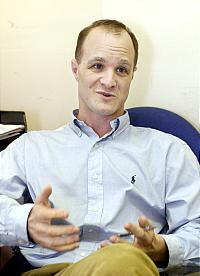 After completing his MBA, Brown knew he did not want to push paper in an office.

Steven Brown, director of Solntse Mexico, does not have a sunny office in the city center. He works on the grounds of a fish-processing plant next to Moscow's outer ring road.

Brown does not mind having fishy neighbors and says appearances matter little to him. He is absorbed in his hands-on work and the thrill of change.

Over the past decade, Brown has gone from working as an environmental consultant in Washington, to running a tortilla factory in Moscow. He also narrowly escaped being kicked out of Russia after a stint in Chuvashia.

"I've been [in Moscow] for 3 1/2 years and it is a dramatically different place from when I came here," Brown says. "As opposed to my hometown of Rochester [New York], where I drive down Main Street and it's basically the same as when I graduated from high school in 1989."

Now Brown oversees production of tortillas, nacho chips, salsas and other foods for Mexican restaurants in Russia. Movie theatres in Moscow sell his nachos and while he does not speak any Spanish, the Mexican Embassy is happy to order tortillas from him.

Being a Moscow-based entrepreneur with a Latin twist sounds exciting. But at the end of the day, it is also a lot of work.

"I do not like getting calls at three in the morning saying that our [production] line is breaking down and we are not making tortillas, because that happens," Brown says.

Lacking any real recourse against customers who refuse to pay and operating under conditions where the electricity can be shut off at any moment is also a challenge.

"You have to expect the unexpected every single day and you've got to love what you're doing." Brown says. "I am not in this for the paycheck."

It was also not for the paycheck that Brown volunteered for service in the U.S. Peace Corps and went to Cheboksary, the capital of the Chuvashia, to work on business development. "I was probably the lowest-paid MBA grad in Russia then," Brown jokes.

He decided against the usual route of financial consulting, after getting an MBA from the University of Maryland in 2000.

"I worked for a good [environmental] consulting company and was good at the job," said Brown, who worked at ICF Consulting Group in Washington before receiving his MBA. "But I learned that I did not want to sit in an office and push paper."

Brown always wanted to do something outside the United States and the Peace Corps provided the perfect opportunity.

So, after he and his wife Jynks stopped briefly in Zelenograd to study Russian, they arrived in Cheboksary as Peace Corps volunteers.

"There are no Americans in Cheboksary," Brown says, "so you instantly become a celebrity."

In addition to being a full-time celebrity and working for the Peace Corps, Brown collaborated on projects with the Chuvash Chamber of Commerce, taught strategic management at the Cheboksary Cooperative Institute and commuted to Nizhny Novgorod, where he also taught business.

"I tried to come up with a class in which my students couldn't cheat, so I made them write business plans," Brown says. "Cheboksary is a friendly, small town -- a great place to learn more about Russian culture," he added.

Until, that is, it turned into a visa nightmare.

When the Peace Corps told Brown "there's a little hang-up with the visas," he got concerned. "We liked Cheboksary and were not ready to leave Russia yet," Brown said, "but if your visa gets canceled, you have to go."

The visa "hang-up" turned into dispute between the Russian government and the Peace Corps that is still unresolved, and Brown's visa was not renewed. Luckily, when the visa problem became clear, Brown's wife was hired as the director of exchange programs in Moscow for the U.S. nonprofit International Research and Exchanges Board, and they got to stay in Russia.

Coming to Moscow paid off. Brown heard of an opening at Solntse Mexico and applied for the position of director. Since he got the job, Brown has made educating Russians about tortillas his personal quest.

"If you show somebody a tortilla [here], they think it's like Armenian lavash. They don't know what to do with it," said Brown.

His factory's salespeople are chefs who go around making quesadillas and other Mexican dishes for restaurateurs.

"We have them eat the dish and then explain how much it costs and how much you can sell it for," Brown says.

He plans to expand the company's operations beyond Moscow and St. Petersburg to provide Mexican food for all Russian cities with over 1 million people.

But Brown is not in Moscow just for his job.

"This is a great opportunity for my daughter to start learning a foreign language from age zero," says Brown, whose 11-mont-old daughter, Anya, was born in Moscow.

This story has been posted in the following forums: : Headlines; COS - Russia; Cooking; Small Business

hello
i am 26yrs old graduate of chemical engineering and i am very in interested in the learning and the production of dishes i.e various type from all over.