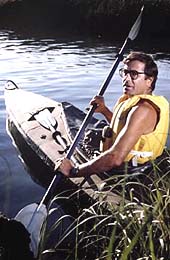 Paul Theroux doesn't feel old. Sure, he recently turned 60 and sure, he told WW, "I get a break when I go to the movies...[but] when we finish talking here I'm going snorkeling." The subject is not irrelevant. Theroux, who is best known for his exotic fiction and travelogues, has produced one book from each category in the past year--The Stranger at the Palazzo d'Oro, published in January, and Dark Star Safari: Overland from Cairo to Cape Town, released last March. Taken together they constitute what some call the writer's birthday present to himself, two divergent explorations of what it means to turn 60.

Dark Star Safari begins as a trek down Memory Lane. Having spent six years in Africa during the 1960's, first with the Peace Corps in Malawi, then as a professor in Kampala, Uganda, Theroux now sets out from Cairo to see what's changed in his 40-year absence. What he finds is chaos. Post-genocidal fallout in Uganda. Bloody land invasions in Zimbabwe.

Shot at by shifta and mobbed by street children, Theroux struggles to reconcile his pleasant memories of Africa with the dystopia that surrounds him, and searches (in vain) for solutions. He occasionally fears for his life and, more than usual, wonders, as did Bruce Chatwin, "what am I doing here?" By turns funny and boorish, caring and caustic Theroux works best as a critic. Discarding PC cultural relativism, he delivers a scathing assessment of foreign aid to Africa, a blight that he suggests is far more dangerous than famine or coups d'etat. The traveler at 60 seems in top form.

In the title novella, inspired by a scene Theroux witnesses in Egypt in Dark Star Safari, an older man recalls his days as a young American traveler in Antonioni's Sicily, where he's sexually ensnared by a disillusioned countess and her ambiguous companion. Later in the book a writer's lust for his one-armed African servant ruins him, and then a retired lawyer falls for his Hawaiian house cleaners. In each account the 60-year-old is toppled, undone by desire.

This is indeed a book about sex. Dirty sex, too--some of it real flashlight-under-the-covers stuff. But it's also about decay and, Theroux says, "the people I was afraid of being." His characters are not just undone by libido, but by a sense of identity that is fast fading.

Though preoccupied with the dulling of time, Theroux remains sharp. And, at work on a new novel, he seems unlikely--and unwilling--to surrender the pen anytime soon. Of his age, Theroux remarks "I don't feel it. Maybe some kids will look at me and think 'He's a fogey, let's take his wallet.' Well," he says with bravado, "let 'em try."