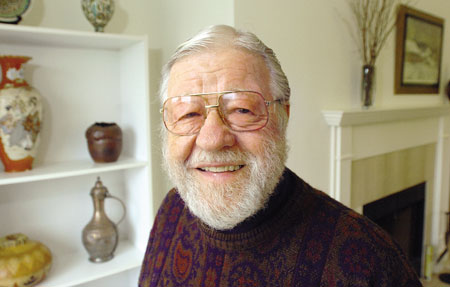 Caption: Elliott Weatherby, a retired college professor, has written the book "Hey Pal, Save Your Money," which he says is about having fun saving money.
Staff photo by Sarah Zenewicz/szenewicz@seacoastonline.com

Don’t deprive yourself of that daily latte you love, contrary to a recent financial best-seller; instead, give the cashier a $20 and sock away those $5 bills and quarters you get in change.

That’s one of the theories that Exeter author Malcolm Wetherbee explores in his book (under the pseudonym Elliott Weatherby), "Hey Pal, Save Your Money!" The book was released March 8 by Hampton’s PublishingWorks.

"The hardest thing about the idea of saving money is the self-denial," Wetherbee said. "You should never let savings become sacrificial or negative."

Wetherbee, who holds a doctorate in psychology from Boston University and is a graduate of Harvard Divinity School, has worked as a therapist in private practice, Peace Corps volunteer in Tunisia, consultant for social service agencies and volunteer for Civil War Round Table of New Hampshire. He’s also spent some 30 years in the academic world as a professor and psychology chairman. He wrote "Hey Pal, Save Your Money!" from the perspective of, and for, a person who is not necessarily sophisticated about markets, stocks, bonds, and the like.

He said his background helped a great deal in writing the book because he’s always been interested in human behavior and aspects of living.

"One of the difficult things in my own life was to manage money," Wetherbee said from his neat apartment, tastefully filled with art, New Yorkers, and books, overlooking the Squanscott River. He saidsays of his first book, "It’s kind of autobiographical of my own frustrations, not to get wealthy, but to get some cushion."

There’s a message in the fact that Wetherbee "has no serious expertise" in the financial field. "Sometimes you have to be leery of the enclosed, narrow field of [financial] experts because they often times talk about the same thing. This book is for the ordinary person," he said. (His latte reference is to David Bach’s The Automatic Millionaire: A Powerful One-Step Plan to Live and Finish Rich.)

Business journalist Chuck Jaffee, who interviewed Wetherbee last week on his WBIX-AM 1060 show MoneyLife, regularly features well-known financial advisors and said he would normally not highlight a book from a smaller publisher and lesser-known author such as Wetherbee.

"We usually go with mainstream publishers, but I kind of like this book. It’s simple, straightforward, short, easy to read. It’s nothing that is not common sense," said a spirited Jaffee, who also called the book "interesting, quirky, and New England-y."

Wetherbee agreed that his book, 144 pages and outlined in a conversational way, is "seductively simple in some respects, but it has a very serious and highly analytical theme to it," including that there is a philosophy of money and quality of life to sort out.

The book does not advise the reader on how to use the money once it is saved, but it gives some insights into what it means to be "saving" and how to hook this into spending, and discusses that the love of money, not money itself, is the root of all evil. With personal anecdotes drawn from Wetherbee’s New England life, the book also talks about the inevitableness of consumerism, and the importance of teaching adolescents budget skills.

"Will it make you rich? It depends on what rich means to you," Wetherbee said. "If rich is equated with untold wealth … or if it means a fulfilled life with self-enhancement and freedom, then yes it will."

He aims to benefit readers of all income brackets, but said the book is particularly designed for people who seem to constantly struggle to make ends meet. He’s also gotten feedback that the book is especially helpful for young adults. Linda Chestney, Wetherbee’s publicist, says numerous parenting- and children-oriented publications have inquired about the book, including Seventeen magazine and Texas-based iParenting Media.

Wetherbee gives about a dozen specific methods that he has practiced himself for about eight years on how to save money painlessly. "It’s the idea that a lot of a little does add up and make a difference," he said. He saw the techniques work in his own life and that’s what prompted the book.

"By all means, I live what I wrote. I have a moderate income but I live a life of royalty because we have enough to not be frightened and do some things that we like to do," like traveling or giving money to grandchildren, Wetherbee said.

Among the practices are what he calls the "quarter horse," collecting quarters, even going out of his way to get back from purchases change that includes a quarter, and slating the collection for savings.

He also suggests the same idea with $5 bills for a technique with the self-explaining title of "never spend a five" and other practical ideas to avoid bank fees and pay mortgages off early.

Wetherbee, born in Waltham, Mass., and a New Hampshire resident for 25 years, lives in the same area of Exeter that at least two other authors live or once did, including Dan Brown ("The Da Vinci Code"), and wrote most of the book in the Exeter library. The library’s assistant director Pam Darlington said Exeter has had numerous published authors, many of whom have also written their books in the public building.

"It’s great that many people come in and write [here]. It shows that the library is very well used," a testament to the size and good collection of the Exeter library, said Darlington, who also favorably reviewed the book for the jacket.

Wetherbee has another book in the works. "It serves the same purpose in the sense of enlightening people," he said, but it is more of a memoir of unique aspects of his upbringing.

His advice to other writers is simple: "If someone has a book in them, they should write it. It can be helpful to others, therapeutic, provide for self-discoveries, fun," Wetherbee said.

Here are some tips from "Hey Pal, Save Your Money!" designed to generate slow, steady cash to begin to create a nest egg:

Grab that Mason jar and don’t just throw away any change in it every night - squirrel away those quarters! They add up to dollars in no time.

When you balance your checkbook, round the sums to the nearest dollar, so you have a growing invisible balance in your checkbook.

The longer it takes to repay the amount owed on a credit card bill, the greater the cost at the end.

This is a foundation of a healthy attitude about money.

Overtime pay, or a refund on a purchase, a bonus - it’s found money. It’s easier to save this money because you weren’t expecting it.

Following are some sources to teach the younger generation sound financial principles: www.aba.com/Consumer+Connection/default.htm and www.nefe.org.

8. Pay off the mortgage!

Commit to paying an extra payment twice a year and that will literally knock years off your mortgage and thousands of dollars off the other end.

Use the same forced-savings as you may have available at work. For example, arrange for $50 a month to transfer from your bank account to a mutual fund.

This story has been posted in the following forums: : Headlines; COS - Tunisia; Personal Finance; Writing - Tunisia