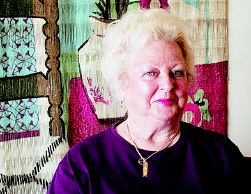 Jackie Boone is shown in her Hurricane home.


HURRICANE -- For eight years, Jackie Boone had the grandest adventure and at the same time had an opportunity to give back.

From 1992 to 2001, Boone, originally from southern California but now a resident of Hurricane, was a Peace Corps volunteer. First sent to Thailand, Boone celebrated her 65th birthday a month after arriving in the country.

"Peace Corps is not just for kids," Boone said. "The organization takes a variety of minorities in order to get a cross section of America."

According to the Peace Corps Web site, the organization's roots and mission began in 1960 when then-Sen. John F. Kennedy challenged students at the University of Michigan to serve their country in the cause of peace by living and working in developing countries.

Since that time, more than 170,000 Peace Corps volunteers have been invited by 136 host countries to work on issues ranging from AIDS education to information technology and environmental preservation.

Boone was part of the six percent of volunteers aged 50 and older that participate in the Peace Corps.

Preparing for her volunteer job, Boone took a French class at Dixie State College thinking she was going to South Africa but was then called and told she was going to Thailand to teach agriculture and nutrition.

"I enjoyed Thailand because it was a completely different culture," she said.

The cultures were all different and unique as well as the circumstances, but Boone said one thing all three places had in common was a lack of running water.

"You learn quickly that if you boil water or garbage, you can eat or drink it," she said. "I drank water the color of tea and washed my clothes on rocks in rivers."

Boone said the adventure wasn't without its scary parts. The living was hard without running water, in huts with dirt floors. And during the eight years, she came down with food poisoning twice, cholera and dengue.

But the rewards outweighed the bad experiences, she said. While in Thailand, she had a chicken project and made aloe vera shampoo over a hibachi. In Ecuador, she taught those in her village about crop rotation, selling produce and using natural fertilizers. On an island in El Salvador, Boone worked in agriculture and forestry and spent many days making mango chutney and jam.

Boone said as a Peace Corps volunteer, the volunteer is there as a facilitator.

"We are there to make lives better," Boone said. "If you can help just one family for a better life, you have done your job."

The hardest part of the eight-year adventure was not having a second language but she liked working with the small farmers and spending time outdoors.

"I was always just a housewife but I love the outdoors," she said. "I spent half my life outdoors and the other half trying to figure out how to get outdoors."

Although the average age of Peace Corps volunteers is 28, Boone recommends the experience for anyone -- from those just graduating from college to senior citizens like her.

"It hard physical and mental work but the rewards are tremendous," Boone said. "It changes your outlook on life and makes you a better person."

This story has been posted in the following forums: : Headlines; COS - Thailand; COS - Ecuador; COS - El Salvador; Older Volunteers