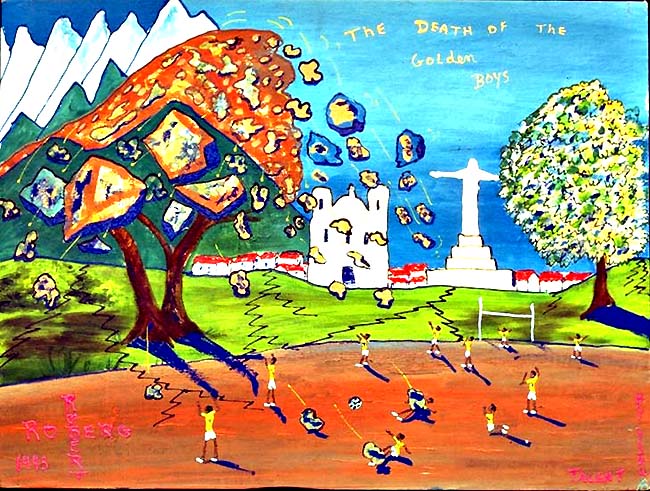 Dedicated pacifist and Street Minister Robert Roberg started painting as a means of witnessing to bystanders. Untrained and self taught, Roberg's work has been featured in Chuck Rosenak's Museum of American Folk Art Encyclopedia of Twentieth-Century American Folk Art and Artists, and in Folk Art Messenger magazine. Select the image at the left to go directly to his paintings.

Roberg was born in Spokane Washington in 1943. He has been a world traveler and came to the attention of the art world in his late 40s. He describes his art as "Apocalyptic" for he feels the judgment Day is near. Many of his themes cry out for a return to God. He is strongly against all uses of alcohol and describes himself as a non-violent peacemaker.

Roberg's paintings are on found materials, and found objects are often applied to the work to help the viewer focus on the message which is printed in bold letters on the surface. "My greatest fear is that I will start believing I'm an artist," he has often said.

Select the image above or click here to go directly to the artist's paintings.

Folk Art From the City of Orlando curated by Frank Holt, Gulf Coast Museum of Art, Largo Florida, May 2002

Art and Antiques March 92 "Roberg is on the brink of national celebrity" Robert Hicks
Chuck Rosenak the editor of the New York Museum of Folk Art's encyclopedia:
"This is a very rare and unusual talent...what you are going to find is that Robert Roberg becomes a star attraction."

This story has been posted in the following forums: : Headlines; COS - Peru; Art