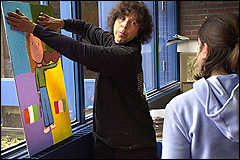 Caption: Artist Natasha Mayers of Whitefield works with students at Riverton Community School in Portland in an art project she hopes will bring cultural awareness to schoolchildren statewide. "People are not threatened by children, and children's art is wonderful for breaking down barriers. It is full of joy," she says. Staff photo by Doug Jones

Natasha Mayers walks into the art room at Riverton Community School with a T-shirt that reads: "In artists we trust."

It's her not-so-subtle way of saying that higher powers and the politicians who trust them have messed up her world. As a painter and artist, she feels obligated to try a different approach to lessen global human suffering than the one employed by her government.

"I am not very good at dialogue or talking with people or persuading people. Through my art, I feel I have a stronger voice," says Mayers, who lives in Whitefield and began her activism when she served in the Peace Corps in Nigeria many years ago.

"I get pretty upset about injustices in the world, especially when the United States is involved."

For her, justice starts at home.

She is helping students paint self-portraits and write brief biographies.

While many of her students are white, others are children of color, some who were born here but many others who came to Maine from other parts of the world. Her goal is to circulate their paintings in schools with less diversity than Portland's.

"There is great cultural richness here. In this school, I am working with the whole gamut of kids, not just ESL kids and newcomers, but everybody. The whole idea of the project is about culture and sharing what you can," she says.

When she began the project, Mayers did not instruct her students to paint a portrait that reflected their culture. She simply told them to look at themselves in a mirror and represent what they saw with oil paint.

That so many of the images include cultural references says something about student pride, Mayers says.

"I think the surprise is that the kids really wanted very much to put something on their panel that expressed something from their cultural traditions," she said.

Many included the colors of their homeland's flag. Others painted stereotypical images that suggested cultural background, such as Central American women carrying baskets on their heads. Others chose specific items that reflected personal interests - things like soccer balls and hockey pucks.

Asha Mohamed, an 11-year-old fourth-grader from Somalia, painted a picture of herself wearing traditional headdress.

"I drew myself. At first, I didn't want to draw myself, because I thought my picture was ugly. But I learned it was better to draw than to give up, so I kept working on my picture."

She is nervous that other children won't like her picture.

"I hope they say good things," she says.

As 12-year-old Sonam Ulfat finished her portrait, Mayers asked if she wanted to add something to personalize the picture. "Is there something you can put up there to tell me more about you," Mayers asks.

Ulfat takes a marker to draw letters from her native language, Farsi. "That way they'll know I'm from Afghanistan," she explains.

The children's paintings and written words will be displayed this week in Whitefield's elementary school. Later this spring, they will travel to schools in Gardiner and Cumberland.

Peace Action Maine hopes to display the self-portraits in other Maine schools before they go up for permanent display next winter at Riverton, where the paintings originated.

In Whitefield, Mayers will encourage students to begin a letter exchange with their Portland peers.

"What I am hoping to happen is that kids in Whitefield will fall in love with an image, or a face, or that they fall in love with a story and really connect in an honest and meaningful way and become pen pals, at the very least," she says.

It's the first time Peace Action Maine has sponsored an artist-in-residence program. With a budget of $12,500, the experiment is funded with grants from the Maine Community Foundation and the Maine Arts Commission, said Greg Field, Peace Action Maine's executive director.

It makes sense to work for social and economic justice by encouraging small steps at home, Field says.

Art is a logical place to start.

"Art can serve as a constructive medium in so many ways," he says. "First of all, the process of doing art engages people in a joint act of creation. The artists, the students, the adult helpers and the teachers get engaged in a process and a dialogue. And one thing we've learned is that in working toward peace, it must start with nonviolent means of resolution, with dialogue and community. Art is part of that process."

Mayers got the idea for the children's portraits after monitoring news from Lewiston, which experienced racial strife with its growing ethnic communities. She was looking for a way to deal with issues of intolerance and racism. Several years ago, she worked with students at Reiche School in Portland, creating large murals that suggested diversity.

"This time, I wanted to do a project where children would fan out all over the state. The reason for that is because people are not threatened by children, and children's art is wonderful for breaking down barriers. It is full of joy," she says.

Her goal of expanding her children's art project beyond the classroom already has begun. The Peace Action Maine grant also funded work that Mayers completed in the winter at the social service center Portland West, where she helped youngsters create large panels, similar to her work at Reiche.

She has bigger ideas still. Mayers recently approached a mosque in Portland about working with Muslim youngsters and has had conversations with members of Portland's Cambodian community, as well.

This story has been posted in the following forums: : Headlines; COS - Nigeria; Art; Art Education