Malaysian Author Shirley Geok-lin Lim rewrote the Madame Butterfly story in her novel "Joss and Gold", only with a white American Peace Corps "hero" and a Chinese Malaysian woman 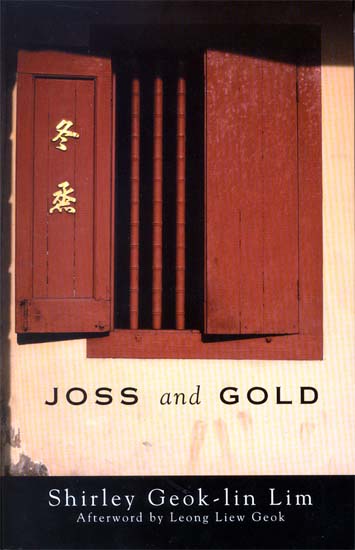 Malaysian Author Shirley Geok-lin Lim rewrote the Madame Butterfly story in her novel "Joss and Gold", only with a white American Peace Corps "hero" and a Chinese Malaysian woman

Writer, critic, activist, educator, Shirley Geok-lin Lim was born in Malacca, Malaysia, one often children of a Hokkien Peranakan1 family. After receiving her bachelor's degree from Kuala Lumpur's University of Malaya in 1967, she went to the US where she earned a PhD in English and American literature from Brande is University. Widely considered as Malaysia's most internationally acclaimed writer in the English language, Shirley Lim is the author of five volumes of poetry, three collections of short stories, a memoir, and a novel. Her first book of poems, Crossing the Peninsula, won the Commonwealth Poetry Prize for 1980, the first Asian woman poet to receive this prestigious award.

Her other volumes of poetry include: No Man's Grove (1985), Modern secrets (1989), Monsoon History (1994), and What the Fortune Teller Didn't Say (1998). Her memoir, Among the White Moon Faces: An Asian-American Memoir of Homelands (Feminist Press, 1996), published simultaneously in Singapore as Among the White Moon Faces: Memoirs of a Nonya Feminist (Times Books, 1997), won the American Book Award for 1997. Her first novel, Joss and Gold, was published by the Feminist Press, New York, and Times Books International, Singapore in 2001. Her short story titles include: Another Country (1982), Life's Mysteries (1995), and Two Dreams (1997).

Shirley Lim 's reputation as a writer is rivaled by her reputation as a critic of Asian and Asian American literature. She has edited or co-edited The Forbidden Stitch (recipient of the 1990 American Book Award), Approaches to Teaching Kingston's The Woman Warrior, Reading the Literatures of Asian America, and One World of Literature. She is also the author of Nationalism and Literature: English-language Writing from the Philippines and Singapore (1993) and Writing South East/ Asia in English: Against the Grain (1994). Winner of numerous awards for her outstanding contributions to teaching, she is currently Professor of English and Women 's Studies at the University of California, Santa Barbara.

Her forthcoming books include a novel, a volume of poetry, and a book of cultural and gender criticism.

This interview was carried out via electronic mail in March 2002.

MAQ: In July 2001 you came to Kuala Lumpur to launch your novel Joss and Gold. During that visit you also gave a talk to my Malaysian Literature in English class and said that it took you twenty-one years to complete the novel. Can you elaborate why, and how you kept your focus on a single story for so long?

SL: Twenty-one years, beginning around the summer of 1979, and really completing the final writing (as distinguished from copyediting) around 2000. It took that long because, as I said earlier, my life as a writer has been discontinuous. My life as an academic has been one long progression, and my familial life a daily reality. After that initial summer of writing, the bulk of writing Joss and Gold occurred during fellowships or residencies; the first at the East-West Centre in Honolulu, the second as Fulbright Distinguished Lecturer in Singapore, and the last tying up of its many strands at a writer's retreat on Puget Sound near Seattle.

The story existed in essential form from the beginning; it was to be a rewriting of the Madama Butterfly story, only with a white American Peace corps "hero" and a Chinese Malaysian woman; and the May 13th riots were to be foregrounded as the marker for the novel's race and gender politics in which Malay, Chinese, and American were all to play a part. Somewhere in the writing, Singapore came into the narrative. The subplot of Indian and Chinese interracial relationship was in the mix from the very outset. The many narrative characters, the plot elements, the scenes and themes were all vivid to me from the very beginning.

It was always a matter of finding the time to complete the novel, never a matter of whether I had a novel to complete. Thus, there was never a problem with keeping the story in view.

Perhaps the fact that the narrative moves through three national territories, cultures, and distinctive time frames also enabled the generation of what appears to be a seamless text. The novel, after all, is temporally, spatially, and dramatically split three ways, and each of the three books came out of separate writing periods. That is, it is as if I wrote three novellas across a number of years, but they are composed into a single novel.

MAQ: I think thematically Joss and Gold is an extension of your earlier writings. Isn't this book about ethnicity, nation, gender, and identity-themes you have been exploring since your earliest poems such as "Dressing Room," "Speech," "Stranger," "Submission," or stories such as "Journey," "On Christmas Day in the Morning," and "Mr Tang's Girls"?

This story has been posted in the following forums: : Headlines; Writing - Malaysia; COS - Malaysia; How others see us