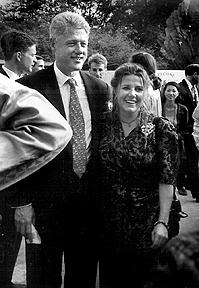 Enyo Nam and her husband, Godwin, prepare to feed their 4-month-old twin boys at home in Amedeka, Ghana. At right is Juan, Godwin's uncle. The family is one that Central Point resident and Peace Corps volunteer Monica Arman visits regularly, checking on their welfare and helping them care for the twins.

Monica Arman isn't overly concerned about the snake-lizard slithering in the straw mat beneath her mattress.

But spiders nearly the size of hamsters hopping around her bedroom do give her pause.

"Maybe they are mutant spiders -- they are just humongous," she said. "I'm hoping the geckos and the snake-lizards are eating them.

"My entertainment at night -- I try to get in before dark because the mosquitoes are just awful -- is to listen to the BBC and watch the geckos eat the mosquitoes," she added.

Arman, 32, isn't complaining about the snacking geckos and restless lizard-snakes. Rather, the Central Point resident is merely describing nightlife in the remote village in Ghana where she has been serving in the Peace Corps since the fall of 1997. She is home visiting her mother, Joan Arman of Central Point, before returning to Africa next week to complete her two-year tour.

"This is something I've always wanted to do," she said of serving in the Peace Corps. "I want to make a difference, do something for others. I think I'm doing that."

A photojournalist who once worked as a free-lance photographer for the Mail Tribune, she is based in Amedeka, a village of about 1,000 near the Akosombo Dam on Lake Volta about 100 miles north of Accra. Arman has a bachelor's degree in photojournalism from California State University at Long Beach with a minor in psychology.

She is helping the villagers make a forest nursery economically successful and teaching them English. In her spare time, she is instructing them on the finer points of riding a bicycle, a popular mode of transportation.

"Ghanaians are wonderful people," she said. "They are very, very hospitable."

As she talked about her first year in Ghana, she leafed through a thick album of photographs.

"This is my mother and father -- I've been adopted by them," she said of a dignified-looking older couple.

She paused for a moment at photographs of villagers washing their clothing in the river.

"I try to get them to wash away from the river," she said, noting that a parasitic worm will often attach itself to bare flesh.

Several photographs depict the open market that offers everything from fish to vegetables.

"It's breeding grounds for any kind of disease -- there are flies all over," she said.

Another shot shows a young boy taking a shower during a rain storm. One portrays a woman carrying a large load of sticks on her head.

Another photo is of what she called a "bush rat" spread out to dry on a wooden frame.

"That's a meat we eat -- it's a rodent they barbecue," she said as she flipped on to another page.

However, the main staples are maize and a yam-like tuber, albeit not as sweet as a yam, she said.

It's a diet that takes some getting used to, she said, noting she met a newly minted Peace Corps volunteer at a nearby project who hadn't eaten for four days. She got some food for him that he could eat.

"You feel like you've almost stepped back a thousand years over there," she said. "Life is a lot simpler. I do my own washing -- it's about three hours of intensive labor. You get a bucket, scrunch it together and wash."

Save for batteries, there is no electricity in the village.

"I'm kind of spoiled because I do have running water in my house half the time," she said.

"We're so fortunate here in America," she added. "There is no medical care in those villages. You watch people die. It's sad."

Foreigners must also take care in the hot, humid climate. Arman turned to a photograph of a friend who left Ghana after nearly dying of malaria.

"She decided life was too valuable," Arman said, adding, "She had sold a software company to join the Peace Corps."

Arman has had one water-borne disease and four respiratory infections. She takes medication daily to prevent malaria.

And Arman, who has learned to speak the Ewe (pronounced eh-way) tribal language, has lectured local villagers to take precautions when it comes to water-borne diseases.

"We are just trying to plant the seed," she said of her Peace Corps work. "It's a long process, but it's worth it."

Arman, who hopes to work at a school for the remainder of her tour, says the experience is something she will never regret.

"I think all Americans ought to go to a Third World country and live at least a year," she said. "It makes you appreciate what we have."

This story has been posted in the following forums: : Headlines; COS - Ghana; President Clinton; Humor; Stories