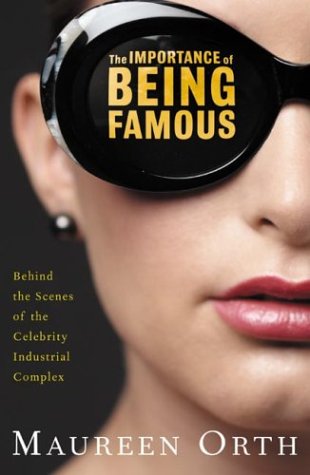 Fame and the 'gods' who feed it
In 'The Importance of Being Famous,' Maureen Orth takes readers on an inside tour of the world of fame-bridging entertainment, politics and news — and the lives of those who understand the chemistry of fame — how to create it, manipulate it and sustain it. Read an excerpt.
Updated: 9:21 p.m. ET May 02, 2004

If you're like most Americans, you probably can't get enough of the latest tidbits about folks like Omorosa, Paris Hilton and Britney Spears. But is it really news? Is there a difference between fame and infamy? And why are we so hung up on celebrities anyway? Those are some of the questions Maureen Orth of Vanity Fair magazine poses in her new book "The Importance of Being Famous." Orth discusses the book on “Today.” Read an excerpt here:

My work in this book comes from a topsy-turvy climate — a war zone of media monsters and million-dollar spin. It is a different, hyped-up, star-obsessed, more intense, and more artificial reality than when I began my career, in the 1970s, observing and writing about lives lived in the spotlight of politics and entertainment. With cable TV, the Internet, and the ballooning size of the media conglomerates, there is more need for content and airtime to fill. But what do we get? A lot less meaning and a lot less real product. Politics is often served up as scandal. News is more and more centered on the latest sensational drama. Stars edge out coverage of world events with breathless reports about their latest deals and endorsements. We get scoops on who is behaving badly with ditzy heiresses who sleep around, who dropped which agent, who wore what designer’s dress and jewelry to transform herself into a human billboard on the red carpet. Call it a subliminal message about money, consumption, and a seemingly unattainable lifestyle.

One need not look further than page one of the distinguished New York Times to see how far celebrity coverage has come and how much it dominates. In the last year or so, page one of the Times has featured such previously unthinkable stories as the deaths of singers Aaliyah and Celia Cruz, not to mention the mauling of Las Vegas liontamer Roy Horn of Siegfried and Roy, and an analysis of the career of Britney Spears. Where will it all end?

“Why do I know that Lenny Kravitz has a shark swimming under his glass bedroom floor but have no idea what music he has put out since 1995?” a friend asked me. Why are millions who have never watched Sex and the City so well acquainted with the clothes, shoes, and baby-in-the stroller outings of Sarah Jessica Parker? Why did so much about Bill Clinton’s sex life overshadow the fact that we were in increasing danger from terrorists?

When we look for information about public figures today, we get trends, clothes, pets, marriage partners, significant others, workouts, how the “crib” is decorated, the details of plastic surgery and rehab, an endless parade of lifestyle and process. Now, if you are a star — if you are Cameron or Justin or Demi — your life, or some reasonable facsimile of it, becomes your greatest performance, replayed endlessly in a series of fast cuts on video news shows. Shopping, clinging on crowded dance floors, appearing at awards ceremonies: all of these photo opportunities keep you visible and marketable, and frequently overshadow whatever talent or skill you may possess. But this fixation on process Is not limited to Hollywood stars. Increasingly in sports we learn about contract disputes and money paid rather than points scored; in politics it is the horse race, the performance, the contest handicapped by the political consultants, instead of what the politician stands for.

The book is an informal tour of what I call the Celebrity-Industrial Complex: the media monster that creates the reality we think we see, and the people who thrive or perish there. My challenge, as a reporter in this environment, is to bring the story back alive, accurately, to find the key that unlocks the personalities, the story, or the crime. I don’t mind digging in grubby places. My early experience as a Peace Corps volunteer in Medellin, Colombia, prepared me to fit in at any level. I am also more than willing to pore through thousands of pages of court documents, or whatever is necessary. Often there are scores of highly paid obfuscators in the path of the story. They increase the thrill of the hunt. Willing subjects with high-paid lawyers often get court records sealed; law-enforcement authorities cover their mistakes; any number of spinmeisters or fawning acolytes steer reporters clear of the truth. That is their job. Mine is to find the reality behind the façade. What are the circumstances behind person X’s behavior? What is the motivation? Who is the actual human being hiding behind the make-believe life? A huge “Made for TV and Tabloids” bubble surrounds the famous and infamous today. My job is to pierce it, pull it back.

For example, in the Laci story, Scott Peterson’s attorney Mark Geragos — a seasoned practitioner who represented Winona Ryder after her shoplifting arrest and is now defending Michael Jackson — clearly earns his salary and knows how to play the media big-time. When he took over Peterson’s defense, he needed to provide a little drama to divert attention from the fact that there were no suspects in Laci’s murder besides his client. Voila — satanic cults. It was the devil-worshipers who did it! Call in the cameras. Talk about the old razzle-dazzle. Except now it’s more dazzling than the thrill of a horror movie. Unfortunately, it had as little credibility. Still, legal professionals on TV endlessly discussing satanic cults — and legitimizing Geragos’s claims — became part of the story that the public absorbed. Reality and entertainment merged right before our eyes.

Excerpted from "The Importance of Being Famous: Behind the Scenes of the Celebrity-Industrial Complex." Copyright 2004 by Maureen Orth. Reprinted by permission of Henry Holt & Company. To learn more you can visit their Web site at: http://www.henryholt.com/

This story has been posted in the following forums: : Headlines; COS - Colombia; Writing - Colombia; Journalism