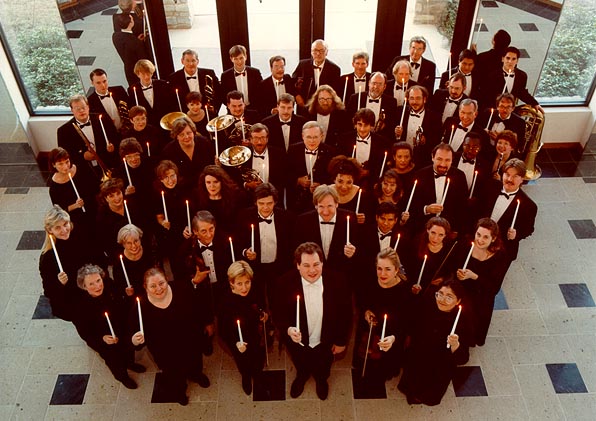 Brenda S. Nienhouse is inspired by the sight of downtown Muskegon.

When she surveys the area from her new office on the fourth floor of the Frauenthal Center for the Performing Arts, the new president and CEO of the West Shore Symphony Orchestra sees numerous places for music, art and various gatherings.

No, Nienhouse isn't envisioning symphony concerts amid the rubble of the Muskegon Mall or art exhibits in boarded-up buildings. Rather, she's imagining music notes floating out of coffee shops and restaurants, and masterpieces filling swank art galleries.

The destruction and barrenness signify to Nienhouse, in artsy terms, a downtown Muskegon renaissance.

"I'm very excited to see the downtown resurgence," Nienhouse said recently. "I love the area and I'm so excited about its potential and the role the orchestra can play in community building."

Nienhouse, 53, recently was chosen from 41 candidates in a nine-month, nationwide search to lead the symphony. Her duties include development, fund raising, long-range planning, community relations and administration, including hiring, overseeing symphony staff and taking care of the budget. She reports to the WSSO board of directors.

Nienhouse's top priorities include fund raising and getting the symphony more involved in the community.

"I'm looking at the role the WSSO can play in the 'Cool Cities' initiative and the role the arts can play in" making Muskegon "cool," she said. "Cool Cities" is a statewide initiative designed by Gov. Jennifer Granholm to help cities become more attractive to young professionals, who leave the state in significant numbers, according to the 2000 U.S. Census.

Nienhouse's most recent employer, the Traverse City Arts Council, where she served as executive director for three years, was intensely involved with that area's "Cool Cities" initiative.

"Arts and culture can have a strong impact on economic development," she said. "As this region is moving forward, there's a strong awareness of the role that the arts and cultural organizations can play in that development."

And she knows the region. A Grand Haven native, Nienhouse grew up in Spring Lake. After moving away to work with several high-profile orchestras, Nienhouse returned to West Michigan 14 years ago to work at the Holland Area Arts Council. And although she has worked in Traverse City for the past three years, she kept a house in Grand Haven and spent many weekends in the area.

Nienhouse also knows a thing or two about starting from scratch. As a Peace Corps volunteer in Nicaragua in the mid-1970s, she piloted the formation of a national symphony and a national conservatory in the third-world country.

During the first year of her two-year Peace Corps assignment, Nienhouse recruited, taught and conducted musicians for a national orchestra. She also did some serious fund-raising, securing donations from several banks across the country.

Nienhouse led the creation of a national music festival in Nicaragua, which significantly helped with fund-raising. The event featured a broad range of folk, traditional and classical music and toured the country in the summers.

The festival not only raised money, "it increased awareness of the arts in that country," Nienhouse said.

Her experience with the Peace Corps led her to pursue a career in orchestra management. She earned a master's degree in woodwind performance from the University of Michigan, where she managed the university orchestra and played clarinet, oboe, flute, saxophone and bassoon.

Following graduation from U-M in 1979, Nienhouse became one of a handful of 800 applicants to secure an American Symphony Orchestra League Management Fellowship, allowing her to acquire hands-on training at two major orchestras, the St. Louis Symphony Orchestra and the Los Angeles Philharmonic, and one smaller one, the Colorado Springs Symphony.

"It was an incredible experience," Nienhouse said. "I was working with managers, marketing directors, finance &#133; I was involved with every aspect of orchestra management. In L.A., I was involved in the initial stages of creating a conducting institute."

Locally, Nienhouse served on the West Shore Youth Symphony board of directors in the early 1990s and coordinated the WSSO "Secure the Spirit" campaign that raised $500,000 for the orchestra.

Speck, who works closely with Nienhouse, said his top criteria for an ideal candidate included "an understanding of how orchestras work, not only regionally but nationally," an ability to "hit the ground running" and "an intelligence, understanding, character and wit all adding up to someone who truly can make a big difference in our organization."

"Brenda was the only candidate who, in my mind, had all of these characteristics," Speck said.

This story has been posted in the following forums: : Headlines; COS - Nicaragua; Symphony Orchestra; Music