Maria Caluag was recruited and assigned to serve on the island of St. Vincent, in the eastern Caribbean. 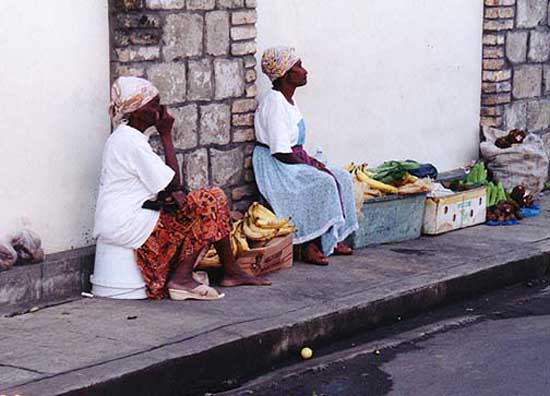 Maria Caluag was recruited and assigned to serve on the island of St. Vincent, in the eastern Caribbean.

Maria Caluag, a native of Fremont, joined the Peace Corps in 1998. Her decision to join was motivated by her childhood visits to her parents' homeland of the Philippines, she said.

"I saw children begging, people squatting in garbage dumps and people getting by without the conveniences we have in the States," she said.

Her curiosity grew when Peace Corps leaflets were passed out at Fremont's Irvington High School.

While at the University of California, Davis, Caluag was recruited and assigned to serve on the island of St. Vincent, in the eastern Caribbean.

During her first year, she said, she taught classes on "conflict resolution, effective communication, anger management, what to do if there is abuse, drug and AIDS awareness, etc."

During her second year, she spent more time counseling students on an individual basis.

"A lot of my cases were females who were victims of sexual abuse," she said. "I visited the victims' families andhomes. I accompanied them to the hospital, police, and consulted with lawyers about their legal rights. I basically became their advocates, when normally they wouldn't find such support because of the taboo nature of their abuse."

Despite her efforts, Caluag said, she felt she had failed to accomplish what she had hoped to in her two years of service.

"This was to be expected, since I came in as an idealistic volunteer wanting to fix everything before I leave," she said.

After her service, she received letters from students who were making progress, she said.

Caluag, who now is teaching English in Japan, said she now understands that social change takes time and that each act of kindness makes a difference.

The Peace Corps stresses that anyone can be a volunteer. Although the average age of volunteers is 28, individuals as old as 81 have served.

For those in the Tri-City area who are interested in learning more about the Peace Corps, information meetings and activities are held in the Bay Area throughout the year. The next is at 7 p.m. May 19 at the Rockridge Public Library, 5366 College Ave., Oakland.

Mitchell said her years in the Peace Corps had a profound effect on her life.

Originally a French major in college, she said she went into Ecuador with no Spanish-speaking skills.

After her service, she returned home and went on to use what she learned in Ecuador to become a Spanish teacher for the Fremont school district for 29 years. She still works as a substitute teacher in Fremont.

"(The Peace Corps) was really a life-changing experience," she said.

This story has been posted in the following forums: : Headlines; COS - Sant Vincent