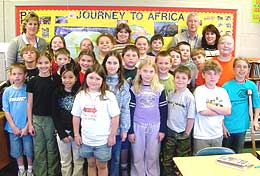 Caption:William Horan’s fourth-grade class at Grinnell Elementary School in Derry is reaching out to students in Africa. (BRIAN ECKHOUSE)

Since January, Becky Horan, 23, the daughter of William and Marie Horan, has lived with the Zerma tribe in Kousa Labu as a member of the Peace Corps. It is a small Niger village with about 250 people. Her location was not selected randomly; Niger is the world’s second poorest country. Most Zerma live in clay houses.

“My hut is a one-room mud-bricked enclosure, with a straw-thatched roof,” Horan wrote in an April 7 letter to the students. “The cement on my floor is chipping away, but it doesn’t compare to the hundreds of termites eating away at my house. When it’s quiet at night and you stand in my house, all you hear are the faint crackling sounds of termites eating and moving around.”

Horan is a University of New Hampshire graduate with a major in sociology and her 26-month mission is to sustain agriculture, specifically to extend crops.

“They’re trapped in their own dimension,” said Nathan Shell, 10.

Becky Horan encouraged Grinnell students to raise $200 for the village’s 40 elementary-level students. Fundraisers include a schoolwide bake sale; the school’s Kids’ Care club will also contribute. Providing basic school supplies, including paper and pencils, is vital; when a tree is cut down, the Sahara Desert expands — and the desert has already digested two-thirds of Niger.

“Some countries have a lot of things, but this country (Niger) doesn’t,” said Samantha McMahon, 10. “For our school, it’s a fun project and we’re helping.”

“We have, like, everything; and they have nothing,” Warren said. “But if you live there, you don’t know any better, because you’re used to it.”

Every morning at 5 a.m., Becky Horan is wakened by a man chanting; the man recites a religious message for all to hear. Becky then proceeds to prepare her breakfast on her mud stove. She has tried to teach the villagers how to construct such a stove, but mostly to no avail.

With temperatures approaching 120 degrees Fahrenheit, the Zerma people are eating just one meal per day right now. During last year’s hot season, there was a drought; now, there is a food shortage.

With the shortage, some eat fried crickets; to Becky, the taste resembles that of potato chips.

Horan’s students have communicated with his daughter via speaker phone and by snail mail. She has also taught her father’s students some words and phrases, including “Kala Tonton,” which means in English, “okay, ’til later.”

Besides supplying those direly in need, Rebecca Brand, 9, stressed the project’s educational impact.

“We could learn what they’re culture is,” she said. “They have so many different languages over there. It would help us, because when we grow, maybe we want to be in the Peace Corps, too.”

Some students are raising money outside school grounds — by selling paper fans for a quarter each, four Horan students amassed $8 last week.

Any extra money raised will be earmarked for the village garden project. Donations can be made payable to Grinnell Elementary School.

This story has been posted in the following forums: : Headlines; COS - Niger; World Wise Schools