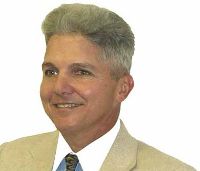 Editor, the Tribune: Interesting that the day after I sent a letter saying Iĺd not repeat my U.S. House run this year, Hank Waters makes his most acrid attack yet on "protectionism." I doubt heĺd seen my letter, but he surely recalls that incumbent Kenny Hulshofĺs support for global "free trade" was the main reason I challenged him.

People like Hulshof, Sen. Kit Bond, President George W. Bush - and Waters - who insist the world is so simple as a single economy hold economic illusions that, for the less fortunate among us, become tickets to battlefields and roadside bombs in terrorist Third World wars. John Kerry - whose trade protection view you call "demagogic" - had Vietnam experiences more instructive than economic illusions.

Had Waters been in Vietnam, he might have returned with views - as I did after serving in the Peace Corps in Latin America - making him more open to protecting our domestic jobs and domestic markets and to letting other nations be free to do the same.

The mother of a U.S. soldier killed in Iraq was reported saying we "like thinking of ourselves as the big country that can solve other nationsĺ problems yet fail to solve problems here at home." It is time we think differently of our roles in the world. Not to isolate from others, but to hear that motherĺs concern and help make Kerryĺs "New Direction for America" a shift from American empire to American example - for democracy in the worldĺs many economies.

This story has been posted in the following forums: : Headlines; COS - Colombia; Protectionism