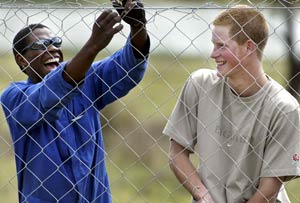 Prince Harry on a high in the Roof of Africa

FROM MICHAEL DYNES IN MOHALE'S HOEK

Caption: Prince Harry shares a joke with a workmate as they build a fence at the Mants’ase Children's Home near Mohale’s Hoek, Lesotho

Walking firmly in the footsteps of his late mother, Prince Harry emerged from his self-imposed African seclusion today to smile at the cameras and appeal for Britain to help the people of Lesotho.

Since arriving in the tiny mountain kingdom two weeks ago, the Prince of Wales's younger son has been travelling around the landlocked country, working on a variety of community projects as part of his gap year before going to Sandhurst.

Sporting a crew cut, a khaki T-shirt, and a pair of grey cargo pants, the slightly sun-burnt Prince was photographed working in a ten-man gang helping to erect a wire-mesh fence and planting trees around the Mants'ase Children's Home near Mohale's Hoek, 75 miles south east of Maseru.

"It's fantastic," Harry said when asked how he was enjoying his stay in Africa. "It's really good fun learning about the culture of the people here," he added.

"People in England do not really know a lot about Lesotho. But it needs their help. There are all kinds of needs here," he said when asked what he hoped to get out of his two-month stay in a country whose dramatic mountain ranges have been dubbed the "roof top of Africa".

Accompanied by his friend George Hill, the son of Anna Hill, a former flat mate of Diana, Princess of Wales, the two friends have come face-to-face with the ravages of poverty and the HIV-Aids epidemic engulfing the former British protectorate.

Landlocked Lesotho, the most impoverished country in southern Africa, has an HIV-Aids rate of more than 31 per cent.

Life expectancy in the picturesque kingdom has fallen to 36, and the World Food Programme is currently gearing up to feed 600,000 of the country's 1.9 million people in the wake of three years of successive drought.

Harry and George are in Lesotho as the guests of Prince Seeiso, the younger brother of King Lestsie III, who wanted the two teenagers to "see how the other half lived" and to develop a "life-long bond" with the people of the kingdom.

"We are hoping to elevate our national profile," Prince Seeiso said. "I hope Harry can take home a personal attachment to Lesotho when he goes," he added.

During a visit to Matsieng, Prince Seeiso's home village, the two teenagers accompanied the local doctor on his rounds of HIV-Aids and TB patients.

"Harry and George were briefed on what they would see there," said Prince Seeiso. "But they were clearly taken back by the condition of the people they meet, some of whom only have weeks or days to live," he added.

Harry and George have had little option but to eat mealie pap, the local staple made from ground-up maize, which most Europeans find inedible.

"He had a whole plate of it the other day," Prince Seeiso said. "I'm not sure if he liked it, but we were starving, so he had no choice."

But life for the two teenagers in Lesotho has not been all hardship and deprivation.

They have seen some of the country's best-known sights, including the Katse Dam, the Sani Pass, and the Ts'ehlanyane Nature Reserve.

They have also been riding on Lesotho ponies, joined thousands of Basotho fans to watch Lesotho v Botswana at the Maseru stadium, and gone for hikes in the rugged mountain countryside.

At the Mants'ase Children's Home, an orphanage set up to look after children whose parents have died of HIV-Aids, Harry had struck up a friendship with Mutsu, 4, who arrived at the home a year ago with his elder brother and sister after their parents died of HIV-Aids and nobody else could be found to look after them.

HIV-Aids fatalities are now so high in Lesotho that families are overwhelmed with orphaned children and can take in no more.

Miranda Lopez, director of the US Peace Corps which runs the orphanage, welcomed his visit. "More and more children are coming to us after they parents have died" she said.

"The problem is going to get much worse. Harry is giving us publicity just by being here, and we are going to need all the help we can get," she added.

After a year gallivanting around West End nigh clubs, Prince Harry will find life in Lesotho considerably less glamorous.

There are few nightclubs in Maseru, the drab and rundown capital, although there are plenty of shebeens which sell the local Maluti brew at around 50p a can.

With unemployment running in excess of 60 per cent, and average incomes of some 50p a day, drinking companions, especially those who can afford to buy endless rounds of cocktails, will be few and far between.

But in the desolate rural areas, where the third in line to the British throne is spending most of his time, the sources of distraction and temptation are even fewer.

Most Basotho are struggling to feed themselves and their families on a daily basis. The country barely produces 10 per cent of its own food requirements, and is reliant on international aid to survive.

The only real worry for the royal minders is the northern Mokhotlong marijuana growing region, where Basotho men in gum boots, carry their produce on donkeys down the mountain trials to service the flourishing drugs market in KwaZulu-Natal.

This story has been posted in the following forums: : Headlines; COS - Lesotho; Royalty; HIV; AIDS; Orphans

African children will always suffer. People will look at their tv screens and see pictures of it, but they won't do very much about it. They'll say "that's too bad" and that'll be it. So what will it take for our society to realise that it takes more than just sending in money?! it will help to some extent but if you look at it as a whole picture.. what good does it really do? we all need to be reminded about why it is the way it is. We need a new goverment in africa, a goverment that will work against not only starvation but against all problems in africa.. Zimbabwe for example. So much more is needed to make people happy in africa, happy with the way that they are living. So what can we do?

Good for Harry! he is doing a lot of hardwork out there in Africa and doing other important things.
He is a very busy guy and very strong minded to sick children with Aids. I won't be able to do those things cause it's tough work.
Princess April Ann