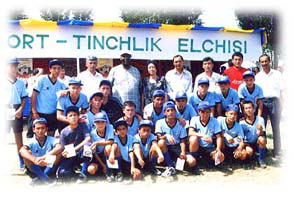 Language of soccer spoken by US players and visitors

Eric and Jake Greenstein have few words in common with the two young men from Central Asia who came to stay at their Needham home Wednesday for a soccer tournament. And Arzimat Mamanov, 15, of Kyrgyzstan, and 14-year-old Alexandr Kolyakov, of Uzbekistan, have seen little in the United States that reminds them of the orphanages they live in back home.

But Sharyn Greenstein said that when her sons and their visitors knock a soccer ball around the basement, they don't need to talk."Put a soccer ball in front of them, and they're instantly connecting," she said.

Mamanov and Kolyakov are here as members of the Central Asian All-Star team, part of a "friendship" soccer tour sponsored by USAID, bringing 18 soccer players to Boston this week from Uzbekistan, Kyrgyzstan, Tajikistan, and Kazakhstan. They come from border regions of the former Soviet republics, which have long histories of ethnic conflict.

"It's tough . . . these kids don't have much," said Wylie Williams, the tour's program director and a former Peace Corps director in Kazakhstan. "The children come from poor, remote villages. They are still very much feeling the impact of the fall of the Soviet Union, and there are not a lot of organized sports. Drugs and AIDS are very large problems in these countries. But we're trying to give them positive distractions."

Formed out of a sports-education program already in place in the Ferghana Valley -- which runs through all four countries with Uzbekistan as its center -- Williams said he hopes the tour fosters cultural understanding and breaks down stereotypes, forming a basis for international communication. It was organized by Cambridge-based Abt Associates, Inc., an international development firm.

Williams said the bonds the players build are important.

"As the kids from Kyrgyzstan look at the Uzbek kids and the Uzbek kids look at the American kids and so on, they are forming friendships across international borders," said Williams, a Charlotte, N.C., native and former deputy mayor of Washington. "That speaks very well for forming relationships in society. I would hope to see national leaders emerge from this group."

The Central Asian All-Star Team, which already made a stop in Washington, has been playing games against the Needham Thistles and taking in the Boston sights.

On Thursday, Governor Mitt Romney welcomed them to the State House.

"I feel very well that I got the chance to come, I like it here very much," said 14-year-old Kudratsho Hofizov, of Bouston village, Tajikistan, adding that he was excited because "our city's name is Bouston, and here is Boston!"

Communication has not been easy despite the good will and sports camaraderie at the Greenstein house.

They have been getting along with Mamanov translating Kolyakov's sentiments from Uzbek to Russian, then using an online translation site to translate the Russian to English.

But Sharyn Greenstein said her family has already "seen how sports can bring people together who culturally are so different."

"With all the turmoil and religious strife in the world right now, to have such a positive program that puts the US in a good light is so important," she said.

"They found ways to communicate," she said.

"This will hopefully be the start of a long-term relationship."

This story has been posted in the following forums: : Headlines; COS - Kazakstan; Soccer; Sports