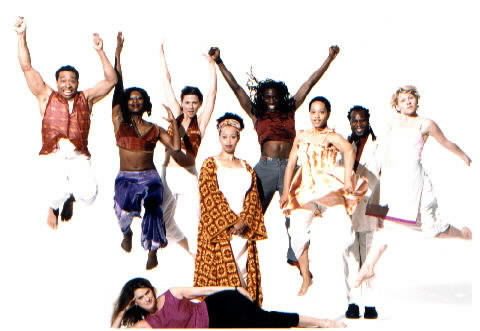 Like the stormy Senate confirmation hearings on the nomination of Clarence Thomas as U.S. Supreme Court Justice 13 years ago (1991) but with Thomas, who is black, as white, and the white male senators as blacks.

She also likes to play by different rules.

Like a game of musical chairs in which a chair is removed each time before the music stops but no one is "out."

Both of these role reversal, circumstance-altering, condition-varying situations has been part of one of the original dance presentations of Jane Comfort and Company of Lower Manhattan and for which Comfort is director, writer and leading performer.

She told of her tendency to showbiz switching Thursday night at the American Museum of Science and Energy as she gave the fifth of this year's Community Lectures, a series of talks, now in their seventh year, sponsored by Friends of Oak Ridge National Laboratory.

Comfort, as have been many previous FORNL lecturers, grew up in Oak Ridge, attended Oak Ridge schools graduating from Oak Ridge High School in 1963. She took dancing lessons from three of the community's early "dancing masters," Dana Estabrook, Fred Stansbury and Suzanne Skeel.

It was at Estabrook's home dance studio on Orange Lane that Comfort, as a 5-year-old, aspired intently for but didn't get a featured role in a production of "Cinderella," a "life is unfair" experience, she said, that led to her determination to become a professional dancer. That ambition waned when, as a teenager, she got into competitive swimming for the Atomic City Aquatic Club and then enrolled at the University of North Carolina as an art major.

But during her freshman year at what was then the Women's College of UNC at Greensboro, she had a faculty counselor who, after getting to know her and hearing of her childhood goals, told her firmly "You must be a dancer!" Thus, though she went on to graduate as an art major and serve in the Peace Corps in Venezuela, by the early 1970s she was in lower Manhattan determined to make it into the New York dancing world.

And she did, modestly at first, appearing in multiple choruses including a production involving signing and called "Dancing Hands" - language as dance. This unusual show attracted attention and segued her into the formation of her own company.

Many of her productions, including the recent "S/He," have used gender and racial reversals. In one she featured a 6-foot male as a Barbie doll. Another included a group of women who commented on males in the manner of construction workers in New York commenting on the physical attributes, or lack thereof, of passing females - still more role reversal, sex juxtaposition.

In her preparations for "S/He," she did personal research, dressing as a man and going to bars to study how males move, how they "use space," a very instructive exercise, she says if sometimes a bit scary - fearing exposure.

She has never hesitated to involve political matters in her work, building one presentation largely around the 1996 presidential race in which Sen. Robert Dole, Republican of Kansas, ran against President Bill Clinton seeking his second term. Also former Speaker of House Newt Gingrich and his efforts to deny funding to the National Endowment for the Arts, from which she has received a number of grants.

Another recent work, "Three Bagatelles for the Righteous," is a suite of dances performed to sound bites of political and religious leaders. She used videotaped segments to augment her talk including some or her more provocative performances that, she said, would likely "horrify" her mother, Nancy Crews, who was in the audience.

Comfort made numerous references to Oak Ridge childhood friends, like Carolyn Korsmeyer, the late Leslie Huber and Dick Weinberg, acknowledging that she is appreciative of having grown up in a community with such a diverse population and with such good schools.

During the question period I reminded her that Weinberg, now professor of neuroanatomy at University of North Carolina at Chapel Hill, had preceded her as one of the FORNL lecturers in 2001. Given her imaginative concepts, like language as music, what did she see in common: her work in dance and his study of the functioning of the brain; her art, his science?

"We're both seeking something new," she replied.

At the reception following the lecture, Claudia Plumlee brought Comfort's career full circle. Among keepsakes of her late father, George Plumlee, science teacher at Jefferson Junior High School, she had found a yellowed program for that 1950 dance school production of "Cinderella" - the production for which Comfort had felt rejected.

It was Comfort's recollection that, denied the part to which she had aspired, she was cast as one of a chorus of squirrels. Ironically the portion of the program listing those chorus members had wasted away, but Comfort accepted the remnants as a reminder of the disappointment that led to her career as a dancing pro. - RDS

This story has been posted in the following forums: : Headlines; COS - Venezuela; Dance; Choreography