Malawi RPCV John Shannon writes "The Taking of the Waters" 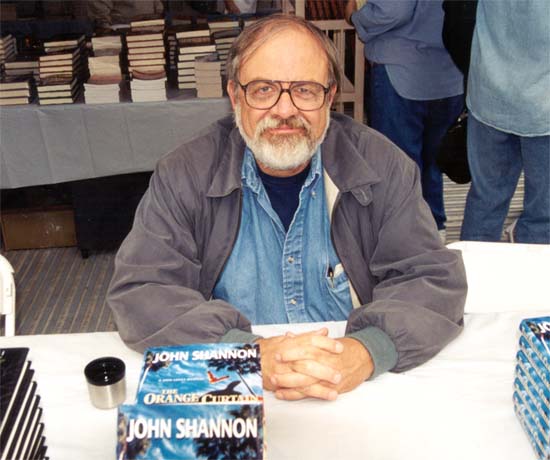 Malawi RPCV John Shannon writes "The Taking of the Waters"

"I don't make it any secret-and I'm sure I've lost readers over it-that my politics are on the left," says the voice on the phone. "My French translator gets really annoyed at me, even though his politics are roughly the same as mine. He has a thing about political correctness, and he finds me too politically correct. But, damn it, I will spend my life fighting racism, and all of my books are going to have some underlying antiracist theme. It's just the great moral dilemma of Western civilization as far as I'm concerned. And fighting particularly against anti-black racism is a moral imperative that's an important part of my life.

And I'm sorry if it makes me politically correct."

If the words sound angry, the voice is gentle-sounding, in fact, a bit like Donald Sutherland. John Shannon, author of the superb Jack Liffey series, is in the middle of explaining that he never planned to be a mystery writer. Speaking to Booklist from his condo in Culver City, California, seated at the desk he built, and surrounded by bookshelves ("If we had an earthquake right now, I would the under mountains of books"), he lays out the story.

Born in Detroit, Shannon grew up happy in the harbor town of San Pedro, California, now a part of L.A.'s sprawl. After college, he worked briefly in journalism, taught in Africa as a member of the Peace Corps, lived in England two different times, and worked as a technical writer and video producer in the L.A. area. But it is perhaps his '70s antiwar and leftist activism that informs his work most.

From 1972 to 1994, he published four novels, the last being The Taking of the Waters, which he's called "a three-generation saga of the American Left." But, he says of political fiction, "It's not that popular in America, let's be honest."

He decided to take another tack. "The 'hard-boiled' genre is a wonderful way of telling social history," he says. He wrote The Concrete River (1996), set in East L.A.'s Latino community, "as an experiment," not planning a series: "I sweated bullets to develop a red herring, and then a red herring for the red herring. What did I know? I'd never written a mystery and I thought you had to do it that way."

He found it satisfying, though, and soon wanted to write another. The Cracked Earth (1999) pits old Hollywood (film studios) against new (video games). Each successive Liffey novel gave him the chance to explore different turf: cults in the Valley in The Poison Sky (2000): Orange County and Little Saigon in The Orange Curtain (2001); African American perspectives and South Central in Streets on Fire (2002); and Iranian exiles in City of Strangers (2003).

"I became conscious of moving into different ethnic terrain," says Shannon. "So, in effect, the books build a jigsaw picture of the whole city-of Southern California, actually." In Terminal Island (see inset), he explores his hometown in fiction for the first time, using crimes committed against Japanese Americans to set the plot in motion. Next to publish will be Dangerous Games, Shannon's response to the controversial Bumfights videos, and he's writing Koreatown now.

Shannon's formula is loose: each book isn't simply an ethnic community or area, "They never schematically deal with just one thing," he says. "Partly because I let them boil out of my own consciousness, partly because that's the way life is. It is very complex."

If Shannon sounds prolific, that's not the half of it: he recently spent time working on a prequel to Terminal Island, and he's just completed a general fiction novel called Twenty-Mile Shadows that he's not sure how to market. The plot-concerning a '60s radical who planned a symbolic bombing but accidentally killed someone-reflects Shannon's ongoing political and moral concerns. "I poured into that a lot of the things I've been wanting to say for a long time."

But if he's artistically fulfilled, there are still a few things missing. "Of course I want a mass-market paperback (deal), I want a movie deal, I want the same things my friends have," he laughs. "I want a house!"

Hey, cynics, even lefties have to make a living.