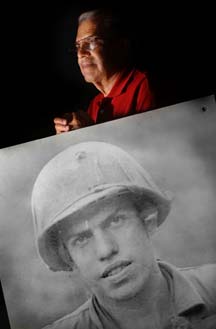 A Corona veteran takes a therapeutic trip back to Korea

By JERRY SOIFER / The Press-Enterprise

Caption: Mitch Salgado, with a photo of himself when he served in the Army during the Korean War, at his Corona home. Salgado also served in the Peace Corps as part of the first group that joined in 1961. Photo: Kurt Miller / The Press-Enterprise

Lives in Corona with his wife, Carol.

Joined the Peace Corps and served a year in Colombia after the war.

CORONA - The armistice that silenced the guns of the Korean War was signed on July 27, 1953. A trip to South Korea last summer to commemorate the 50th anniversary of the war helped Mitch Salgado start to find peace of mind about his service in the U.S. Army during the conflict.

Salgado, a lifelong Corona resident, wore a 50th anniversary war medal given to him by South Korea, while marching in Corona's Cinco de Mayo parade that honored America's veterans on May 1. Salgado, a member of the American Legion, will decorate veterans' graves at the Sunnyslope Cemetery in Corona this Memorial Day weekend.

He and his wife, Carol, have two grown children. Salgado, 72, was a construction worker who helped build freeway overpasses and buildings in Orange County. He also did a variety of jobs for a steel company in Fontana before retiring in 1994.

Carol accompanied her husband on the trip to South Korea. She witnessed the change in him. "He saw the servicemen who were in the battles with him," she said. "They got to talking it out. Before that he never told anyone about what went on. It festered inside of him. It's been good therapy for him to go back there."

Salgado said he is a more relaxed person since returning from Korea. He said he wants to go back one more time before he dies. He wants to visit Outpost Harry, a 1,280-foot-high hill near the demilitarized zone that was the site of some of the most intense fighting Salgado experienced. He was not able to see the hill on the trip last year.

"I want to see the stupid hill where I fought and say a prayer to my friends who passed away and maybe close a chapter somewhere along the line," Salgado said. "If that's possible."
Kurt Miller / The Press-Enterprise
Mitch Salgado, with a photo of himself when he served in the Army during the Korean War, at his Corona home. Salgado also served in the Peace Corps as part of the first group that joined in 1961.

Salgado's book on the war was open in 1954, when he returned home as a troubled veteran with a Bronze Star for meritorious service. After graduating from Corona High School in 1952, Salgado was drafted, given four months of training and thrust into four months of nonstop battle.

He had grown up amid the sweet smells of citrus growing on thousands of acres of orchards in Corona, once the lemon capital of the world. Then he was exposed to the odor of death and the sounds of battle. "The smell - it was terrible," he said. "You never forget it. The screaming - it was terrible."

Trained as a medic, Salgado can't forget one wounded soldier he treated. "He said, 'Just don't let me die,'" Salgado recalled. "I said, 'You're not going to die.'...About three months later, I got a letter from him. He told me thanks."

In addition to being a medic, Salgado carried a rifle. He felt certain some of the bullets he had fired had killed North Korean or Chinese soldiers.

The heat of battle forged strong friendships between Salgado and his comrades, yet the frenzied pace never allowed him to know them as well as he would have liked. "You serve with people that have names," he said, "but they no longer have names because you never took the time to know their last name and what city they came from and who their parents were."

Even though the war was over when Salgado returned to the United States, he felt guilty leaving behind his comrades. Even the assurances of his fellow soldiers didn't ameliorate his feelings.

"When I first came home I felt really ashamed. I was leaving friends there," Salgado said. "You felt like you deserted them. This played on my mind for a long time."

His nights at home were restless. "I had to sleep in the morning when the sun came out," Salgado said. "It was just habit, I guess. You expect something bad to happen during the night."

After his discharge, Salgado sought tranquility in a variety of activities. He played baseball while studying at Riverside City College. He worked for the Corona recreation department and at the youth training school in Chino. Inspired by newly elected President John F. Kennedy, he was part of the initial group that joined the Peace Corps in 1961. He served a year in Colombia.

Salgado was one of the older volunteers among the 80 who went through training for the Peace Corps at Rutgers University in New Brunswick, N.J. A total of 62 made it through the rigorous preparation for the service overseas. Salgado set an example for his fellow volunteers.

"He was kind of like my hero," said John Montoya, a fellow Peace Corps volunteer. "He was experienced. He seemed to know his way around. He was gregarious. He was athletic."

Salgado was very generous, giving his Peace Corps-issued clothing, khaki shirts and pants, to the Colombians before returning to the United States. "I had to give them something after being there for a long time," he said.

This story has been posted in the following forums: : Headlines; COS - Colombia; COS - Korea; Army