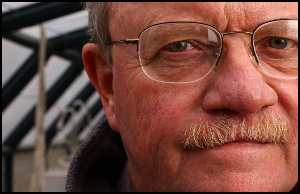 Kent Haruf presents a world of everyday beauty and despair

The trip to California was supposed to be a celebration.

Kent Haruf and his wife, Cathy, were driving west from their home in Colorado and Cathy was reading aloud from the just-finished draft of Haruf's much-awaited follow to "Plainsong," his third novel that had become such an unexpected national phenomenon. Cathy read on and on and, with each passing highway mile, the writer's despair only grew.

"I thought it was crap, so as soon as we reached the motel, I started to rewrite it entirely," Haruf was saying last week in Seattle. "The problems had to do with style -- it was loose, slack, self-indulgent and imitative, in a very amateur way, of Cormac McCarthy. I admire his writing a great deal, along with Faulkner and Hemingway, and I had been reading McCarthy every morning. Some unwanted influences from that had crept into my own writing."

Enter the world of Kent Haruf, dedicated word craftsman, yet every bit as down-to-earth as the Colorado Plains characters in "Plainsong" and now "Eventide" (Alfred A. Knopf, 300 pages, $24.95). Again, Haruf immerses readers in the rigors and rhythms of small-town ranch country, its striving ordinary folk, their humanity celebrated, their difficulties recounted with understanding, and always a presence among them, as strong as the flat-land wind, the redemptive power of love.

The McPheron brothers are back in "Eventide," as is Victoria Roubideaux, the young single mother they had sheltered at their ranch, despite the two old bachelors' set ways and utter unfamiliarity with females other than those out in the pasture.

New characters appear as well: Rose Tyler, a social worker struggling to craft difficult compromises from bad situations caused by poverty, isolation, violence; DJ Kephart, an orphaned 11-year-old, mature beyond his years, sole housemate and caretaker for his frail grandfather; Luther and Betty Wallace, a disabled couple trying to raise two kids in a trailer amid threats from a relative.

These are the sorts of everyday folk that literary fiction too often ignores, or treats with condescension. Haruf treats them with dignity and respect, telling their stories (from the uneventful to the catastrophic) with plain-spoken, straight-ahead prose that is the perfect reflection of these characters and their setting in the fictional town of Holt, some 150 miles due east of Denver and a small world away.

"The wind blew across the flat open sandy ground, across the wheat fields and corn stubble and across the native pastures where dark herds of cattle grazed in the night," Haruf writes. "On either side of the highway farmhouses were set off by faint blue yard lights, the houses all scattered and isolated in the dark country, and far ahead down the highway the streets of Holt were a mere shimmer on the low horizon."

The 61-year-old Haruf, son of an itinerant Methodist minister, grew up in and spent many adult years in three small towns by the border with Nebraska (Wray, Yuma, Holyoke) that he transformed into Holt. He fenced ranches there, worked construction, rode horses, taught school, did alternative service in a hospital and an orphanage as a conscientious objector during the Vietnam War. He came to his understanding of working folk by virtue of his own sweat.

So Haruf, whose last name rhymes with "sheriff," is disgusted with how working-class people, especially those in the Midwest and West, are usually portrayed by writers from the East Coast. He takes his inspiration from William Faulkner, whose portraits of poor Southerners made them "as complicated, devious and heroic as anybody else in the world."

The usual condescension is the reason that Haruf "hated" the Hallmark Hall of Fame production of "Plainsong," which was the highest-rated television show on a recent Sunday evening. Others suggested Haruf ought to gather with friends to watch the premiere but the writer had seen a preview tape and was in no mood to party.

"Hallmark did what Hollywood usually does -- they dummied down rural America, " Haruf says. "They made country buffoons of the McPheron brothers. They made Raymond seem incapable of wearing a hat straight on his head."

Haruf, a man of few words, minces few about others or himself. He is just as direct as his dress at the start of his 30-city national book tour, a pair of blue jeans, a plaid shirt, basic shoes. Although used to the publicity dance of interviews and readings, he gives every appearance of being far more at home on the range.

"Plainsong" may have made some changes in his life, but a swelled head and tight britches are not among them. He feelings about fame's dangers for a writer remain unchanged, even after his own sips from the sterling cup.

"People in America think what you want is to be famous, but being famous is one of the worst things that can happen to you because of the invasion of your privacy," Haruf stresses. "I'm not very famous -- thank the Lord I'm not -- and I can still walk around the town where I live and no one knows me. I want to remain anonymous and get my work done. There are tremendous risks, spiritually, in notoriety."

Haruf is certainly no ingrate. He remains resolutely grateful for the success of "Plainsong," which now has almost 1 million copies in print, with 205,000 of the hardcover edition, 730,000 of the trade paperback, since its publication in 1999. It is a certified charter member of a very select group of literary novels struck by best-seller lightning in recent years, including such beloved works as "Snow Falling on Cedars" by David Guterson, "Cold Mountain" by Charles Frazier and "The Lovely Bones" by Alice Sebold.

"Plainsong" is why Haruf and his second wife, who reunited at their 30th high school reunion, have been able to move back to Colorado and the enviable small town of Salida, amid the towering Rockies, and Haruf was finally able to devote himself full time to writing after three decades of teaching to put vittles on the table. "Plainsong" is also the reason why "Eventide's" first printing is a hefty 175,000 copies, to the amazement of the author himself.

It had been so long in coming and then so sudden. Haruf is a classic tale of writerly perseverance. The graduate of Nebraska Wesleyan University in Lincoln was intent on attending the famed Iowa Writers Workshop, but was denied admission. He moved his family from Virginia to Iowa City with the hope that he could work his way into the school, as he finally did. No words written by Haruf made their way into print until he was 41, and a small literary magazine was the site of this breakthrough.

Two novels followed, "The Tie That Binds" in 1984 and "Where You Once Belonged" in 1991. Both had strong reviews, but small sales.

Haruf continued to read almost daily from his literary heroes, Faulkner ("that astonishing style") and Ernest Hemingway ("that simple declarative sentence"). He memorized favorite passages, can still recite many of those passages today. Haruf tried a new writing technique with "Plainsong," sitting in front of his old Royal typewriter with a wool stocking cap pulled down over his eyes, in hopes that the darkness would help put him in touch with the emotions that he was trying to transmit through his characters.

Nothing he did with "Plainsong," new or old, prepared Haruf for the sudden attention that came to a novel that had been a six-year uphill slog and peaked as one of five finalists for the 1999 National Book Award.

"I know it will sound artsy-fartsy and esoteric, but what I have learned from that is to have a kind of confidence in your own notions and visions of how to go about things," he says. "Obviously, you have to serve your time, work as hard as you can and you can't be deterred by a lack of success. If you allow that to bother you, you should be doing something else again. 'Plainsong' was not anything original, but I did have my own idea of what I wanted to do and it took a long time to do that."

Haruf faced a far different challenge with "Eventide," although he was fortunate to have started into it even before "Plainsong" turned phenomenon. His nighttime thoughts would sometimes center on what it would take to "top myself," but he avoided that when hunkered down in his wool cap at the typewriter.

His greatest fear was that the same setting and characters would persuade people that he was trying to cash in on his "Plainsong" success with a sequel. He saw it instead as a continuation of the Holt saga, just as he expects his next book to be.

"I resist the notion that this is a sequel," Haruf stresses. "Some will say that, but this story is different in tone and in other important ways. 'Plainsong' ended with problems still there, but fairly upbeat. 'Eventide' has a much darker end in sadness and tragedy. It ends at evening, that time near darkness, and all that implies."
P-I book critic John Marshall can be reached at 206-448-8170 or johnmarshall@seattlepi.com