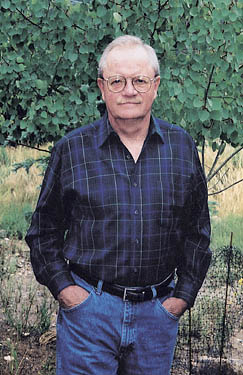 Years ago, before his novel "Plainsong" hit like literary lightning, before the book signings and interviews and swanky award galas, Kent Haruf was a faceless writer hoping to one day make 50 bucks off his prose, let alone imagine anything grander.

He took a chance and sent a manuscript to New York literary agent Peter Matson.

There was much in that manuscript Haruf's readers today would recognize. Like "Plainsong," it was set in the northeastern prairies of Colorado, in an imaginary small town called Holt. It was written in spare language, not an ostentatious flourish in sight, each word set one after another like carefully laid silver on a table.

And maybe it was this, or something more, that piqued Matson's attention.

"It's not that you're reading a page and you go 'Eureka!'Matson recalls. "It's when you put the book down . . . - he pauses - "well, some professionals can weave a spell and when you look up you realize you've been far away someplace . . ."

That's when he decided to represent the unknown writer, for better or worse.

"It's been almost two decades since making that decision to represent Kent that anything came back to me as far as financial reward," he says. "Nothing. I didn't make my postage back until 'Plainsong.'"

If you count the earnings from "Plainsong" in stamps now, you'd likely fill up a few post offices, floor to ceiling.

His story of the intertwining lives of Holt citizens - most memorably, two old bachelor ranchers who take in a pregnant teenager - spent 10 weeks on The New York Times best-seller list and inspired the sort of reviews an author might write for himself when indulging in wild fantasies of success.

It's been translated into nine languages, made into a recent Hallmark TV movie, garnered a National Book Award nomination and, more important, has allowed Haruf, for the first time in his life, the freedom to write full time.

Now that Haruf's new book, "Eventide," a continuation of that story, has just been released, it seems that a storm of attention is about to hit once again: Already, laudatory reviews are rolling in from across the country.

So while Matson sits behind a desk somewhere in New York, finally basking in the rewards of his foresight, Haruf settles into a rocker in his home near Salida, anticipating the start of another round of nationwide appearances.

Since the success of "Plainsong," Haruf, 61, (the name rhymes with "sheriff") has quit his teaching position at Southern Illinois University. He's clearly satisfied to be back to his native state.

He sits in the living room of his log cabin home perched on a plateau just outside of Salida. On this day, eight inches of fresh snow lie on the ground and a brooding mist rises from the roads and lakes in the valley below.

As for Haruf, he's as sturdy as the structure: a stocky man with a trim gray mustache and wire-frame glasses that give him an owlish look. In his flannel shirt and jeans, a pen stuffed in his shirt pocket, he's the kind of man you can imagine living within his books: solid, earnest and utterly without guile, though not without complexities.

"You kind of have to ease into his characters - and then they surprise you," says writer Stuart Dybek, who studied with Haruf at the Iowa Writer's Workshop.

Haruf's books - there are four now - are all set in Holt, a fictional town with gravel roads and "the smells of horse manure and trees and dry weeds and dirt" in the air.

Pickups travel down Main Street and kick up dust on U.S. 34. Customers order butterscotch pie at the diner and everyone is connected in ways they couldn't hide if they tried.

Holt, Haruf notes, is an amalgam of the small Colorado towns he lived in as a child: Wray, Holyoke, Yuma and finally Canon City, where he graduated from high school. The third of four children born to a former schoolteacher and a Methodist minister, Haruf loved life on the plains.

"It was sort of a Mark Twain, Huck Finn existence," he recalls. "Idyllic."

Haruf had no literary aims at that time. Instead, he entertained the notion of becoming a rancher. But modern realities dashed such childhood fantasies.

During a stint in the Peace Corps in Turkey - and later as a conscientious objector fulfilling his service at Craig Rehabilitation Hospital, an orphanage in Montana and a hospital in Phoenix - Haruf took his first, tentative stabs at writing stories of his own.

He had applied to - and been rejected from - the prestigious Iowa Writers Workshop, one of the few programs in the country in the '70s to train serious writers. Frustrated, he picked up his family and moved to Iowa City in the middle of winter, taking a job as a janitor in a nursing home until he was accepted into the program.

Author John Irving, one of his teachers, notes that Haruf stood out from his classmates:"Although I first met Kent when he was my student ... I don't believe he was ever young."

Says Haruf: "If I have any virtue, it might be that kind of endurance and doggedness."

It paid off in small increments. Matson sold the manuscript Haruf first submitted to him to Henry Holt. Published in 1984, the book was titled "The Tie That Binds."

His next book was published six years later: "Where You Once Belonged," another critical hit, but commercial miss.

"Plainsong" was different from the beginning. When it landed on Matson's desk, the agent knew he was sitting on a gold mine almost immediately.

Success changes many, but Haruf is as out of place in the fast lane as a stand of milkweed would be in the middle of Bloomingdale's.

"There are writers who make money and think, 'Now that I've got money, I can order the world around.' That wasn't Kent's response," says Matson.

Indeed, as Haruf anticipates the 23-city book tour for "Eventide," he is more resigned than eager. He keeps his eye on the goal he's had since his 20s.

He plans to return to Holt in future books, chasing his dream down an interstate forever disappearing in the distance.

(Contact Patti Thorn of the Rocky Mountain News at http://www.rockymountainnews.com.)