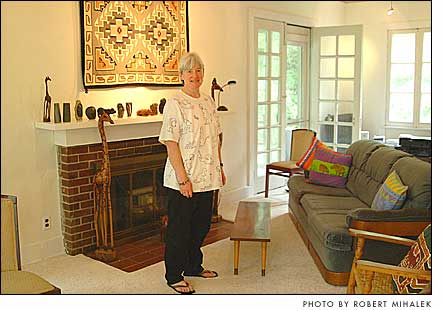 Owners of Morgan House give B&B a new life, look

Caption: Susanne Oldham in the refurbished living room at the Arthur Morgan House. Oldham and her partner, John Semmlow, opened the renovated B&B three weeks ago.

Susanne Oldham worked 18 hours a day, seven days a week, from mid-January to April 23 to open the Arthur Morgan House on time.

“I did just about nothing else,” she said. She got sick just once, for 36 hours. Then it was back to work.

She painted, spackled, grouted and made hundreds of decisions as she, her partner, John Semmlow, her family and a group of contractors renovated the 83-year-old building, which Oldham and Semmlow purchased from Antioch University last December.

The renovated bed and breakfast opened three weeks ago, and its first three weekends were booked, Oldham said in an interview at the business last Friday.

When asked what it felt like to finally open the business, Oldham simply said, “Hallelujah.” She added that she now gets to do what she wanted to do when she purchased the building: take care of her guests.

But to reopen, the bed and breakfast, which was built in 1921 as the residence of Antioch College President Arthur Morgan and his wife, Lucy, had to undergo major renovations. “Had we known what we were getting into we would have had more reservations,” Semmlow said in a telephone interview from his home in New Brunswick, N.J.

“The wiring was the only thing in the house that was in good shape. The only thing,” Oldham said.

So far, the renovations alone have cost more than $130,000, Oldham said, which she and Semmlow paid for by refinancing property they own. The price tag will increase as they continue to make repairs and other upgrades, including replacing the second-floor windows. According to the property information on the Greene County auditor’s Web page, Oldham and Semmlow purchased the building for $255,000, below Antioch’s asking price of $325,000.

Oldham said that their renovation budget was “completely blown by the condition of the house,” especially the floors, which had major structural damage. “It was a mess,” Oldham said. “It was a very nasty surprise,” she added.

The structural damage also slowed down the renovations, so much that Oldham said that the entire project would have been completed by opening if not for those major surprises.

Though the floors proved to be a major problem, the biggest change to the building may be the addition of four new bathrooms. Now each of the Morgan House’s six guest rooms has its own bath.

Each of the bedrooms has a bird theme — Heron’s Room, Woodpecker’s Nest — and features a bird batik by artist Robin Zimmerman. In fact, art featuring birds, including sculptures, is placed throughout the house. Noting that she loves birds, Oldham said the theme is an attempt to “bring the idea of nature into the house as much as possible.”

All the wood floors were refinished, and new carpet was laid on the stairs and in the living room. “I wanted this to be a really welcoming, comfortable place” to read, listen to music and play games, Oldham said of the living room. Oldham, a performing flutist, plans to put in the room a piano her late mother, Gerda Oldham, owned, and will host small concerts there.

In the new kitchen, Oldham prepares for her customers breakfasts’ consisting of locally purchased and “mostly organically grown” products. The house’s furnishings, including the beds, are new or were purchased at auction or from Yellow Springers, Oldham said.

Both Oldham and Semmlow credited John Zearfoss with providing skilled craftsmanship and strong support. “They were willing to work with us and let us work with them,” Semmlow said.

Oldham’s brother-in-law, Dan Beverly, an engineer who lives in Yellow Springs, drew up the renovation plans. Other family members provided help with their brains and muscles and with moral support, Oldham said.

Oldham is running the B&B alone, while Semmlow remains in New Brunswick, where he is a professor of biomedical engineering at Rutgers Medical School. Every few weeks during the renovation, Semmlow visited Yellow Springs, and he plans to spend part of his summers at Morgan House.

Antioch placed the Morgan House up for sale last June when the former proprietor, Marianne Britton, closed the business. Oldham, a Yellow Springs native and former professional arts administrator, had spent two years working with the Peace Corps in Africa when she returned to town last fall, and the business was still available. A couple of months later, the business — and its renovation —- was hers and Semmlow’s.

Oldham said that she pursued the opportunity because “I thought I would be good at being a B&B person.”

Oldham is planning to host a community open house in June, when Yellow Springers can “pop in, have a cup of coffee and see the place.”

“I want to have the whole village over to see it,” she said.

This story has been posted in the following forums: : Headlines; COS - Lesotho; Bed and Breakfast