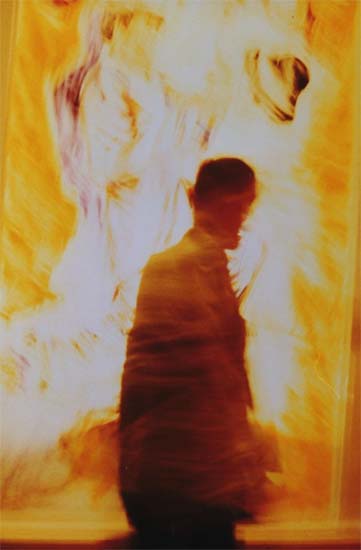 About 80 to 90 people attended a candlelight vigil Monday night in a show of support and solidarity for the victims of an arson fire that damaged their home.

The vigil was held at the site of the Monday morning fire at the home of Sam Nickels, 43, and his wife, Cindy Hunter, 42. The fire is believed to have been started when someone set fire to an anti-war sign the couple had hanging from their front porch.

"It was very clear to us, very immediately, once we got the kids across the street and safe … that our sign was missing. The sign that talked about how many people had been killed in Iraq," Hunter said. "That sign had been burned."

Jan Henley, who lives across the street from Hunter and Nickels, was grateful for the large turnout at the vigil.

"It was a good show of strength and community for Sam and Cindy," she said. "I was very proud to see the crowd just kept getting larger and larger."

Henley has been good friends with Hunter and Nickels, and was terrified to be woken early in the morning because her neighbors’ house was on fire, she said.

Jeff Hie, who organized the vigil, said people came to show solidarity with the family.

"Many of us hold beliefs similar to what Sam and Cindy had the courage to put out. … I definitely felt like it was a loss to myself, too," Hie said. "It (the arson) landed them in a pretty horrible place."

Hie added that he was saddened by the ongoing harassment of the couple.

"It baffles me, this feeling in this community, among certain individuals, that people opposed to our government’s position should be harassed. It just goes against the principles of our country," he said.

Hunter echoed those sentiments. People kept tearing down the sign, along with a "peace" flag on the porch. Recently, the couple moved the sign to their porch to discourage the ongoing vandalism.

It didn’t turn out that way.

"Somebody thought it would be cool to just burn the sign, and that would be a real statement. They probably had no idea that they were truly endangering people’s lives. Which they did," Hunter said.

Hunter said she believes the arson isn’t typical of Harrisonburg residents. Most of the conservative people she’s talked with disagree with her views, but still recognize her right to post the sign.

The real measure of the community is the support offered immediately after the blaze. Some people spent the day helping the couple clean up their house, while one local storage company, Mini Stor-It Self Storage, donated free storage space to the couple.

Also, several of Hunter’s students at James Madison University have set up an emergency account to assist Nickels and Hunter.

This story has been posted in the following forums: : Headlines; COS - Mauritania; Speaking Out; Iraq