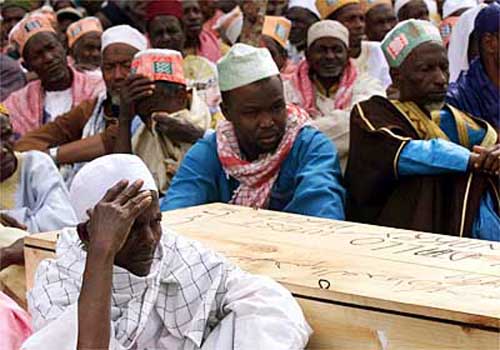 A five-year , $493,000 Interagency Agreement for an Environment Initiative was signed on May 4, 2000, between USAID and Peace Corps to implement the following projects:

1. TERRE (Travaux de l’Education Rurale et de l’Environment), an agroforestry and environmental education project in which the messages from the lessons learned from initial work done in the three watershed areas are taken into other regions of Guinea
.
2. Enhancement of synergy among sectors, in which Education and Health volunteers are made aware of environmental issues, and include environmental education in their classroom and health center work, collaborate with community groups to celebrate Earth Day, and carry out secondary activities that have a positive impact on Guinea’s natural resource base.

Volunteers from Peace Corps/Guinea have played a pivotal role in USAID financed natural resource management projects since 1992. Working in collaboration with the National Directorate of Water and Forests (DNEF), and with support from USAID, Peace Corps Volunteers worked form 1992 to 1997 in three targeted watersheds of the Fouta Djallon highlands, Diafore, Dissa, and Koundou. The PCVs’ primary purpose was to build the capacity of communities to better manage their own natural resources.

A feasibility study conducted in 1997 by a third-year NRM volunteer substantiated evidence that environmental issues in Guinea’s rural areas will continue to take high priority for some time to come. Starting in 1999, Peace Corps initiated an Environment Initiative, which built upon the work of several generations of NRM volunteers, as well as the work of volunteers in Health and Education.

The recent signing of the Peace Corps/USAID Inter-Agency Agreement, which runs through April of 2005, will serve to further strengthen and develop the long-time collaboration between the two agencies.

The NRM collaboration is also in keeping with the Government of Guinea’s long-range socioeconomic plan, which has decreed that agricultural production and environmental protection will be the government’s highest priorities for the next 15 years. The assistance that Peace Corps volunteers can provide the Government of Guinea in its efforts to improve the management of natural resources for profitable and sustainable agricultural production is highly valued and actively solicited at the local, regional, and national levels in Guinea.

This story has been posted in the following forums: : Headlines; COS - Guinea; USAID