Who would bet that tough Marine Corps veteran Tim McLaurin would join the Peace Corps as a dairy specialist to teach Tunisian Arabs how to keep their cows healthy and their milk safe? 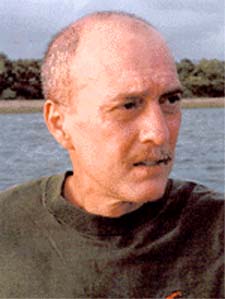 Who would bet that tough Marine Corps veteran Tim McLaurin would join the Peace Corps as a dairy specialist to teach Tunisian Arabs how to keep their cows healthy and their milk safe?

Who would bet that a Pepsi-Cola truck driver from East Fayetteville, for example, would graduate from the University of North Carolina at Chapel Hill in journalism in 1985 and win awards for writing three novels and a memoir praised for their eloquence?

Who would bet that the same tough Marine Corps veteran would join the Peace Corps as a dairy specialist to teach Tunisian Arabs how to keep their cows healthy and their milk safe?

Or that a star high school athlete would contract deadly multiple myeloma at age 35, endure having Seattle doctors cook his bone marrow with chemicals, accept a marrow transplant from a beloved brother and then survive to write more?

Or perhaps more surprising, that in 1997 this rural-rooted North Carolinian, who sometimes lives in a plumbing-free cabin in the woods south of Chapel Hill, could find a press to publish a new epic poem about farming and land development?

McLaurin, who turns 44 this month, has done all those things and more. In January, he received a letter and certificate of appreciation from N.C. Gov. James Hunt recognizing prompt action that saved the life of a drowning man whose boat had sunk on the Cape Fear River.

At the time, McLaurin was piloting a pontoon boat that he, his son Christopher and others had modified to look like a huge book saying “READ TO KIDS” on its spine. The weekend trip from Fayetteville to Wilmington followed a “Tim McLaurin Literacy Celebration,” which the Cumberland County Public Library sponsored to encourage children to expand their world through books. The purpose of the voyage was to encourage parents and others to read to preschool children.

“The Last Great Snake Show” tells the story of a tight-knit, mixed-race group of Southerners driving with little money a dilapidated bus from North Carolina to the Oregon coast. Their mission is to enable their dying matriarch to come “home” to rugged land she bought sight-unseen years before and dreamt about ever since.

-- by staging hoochie-koochie shows featuring poisonous snake-handling and exotic dancing. Along the way they meet spoiled prep school students, cops, thrill-seeking movie-makers, survivalists, a rich Southern belle masquerading as a penniless orphan, and others. They confront unexpected prejudices about themselves and the South as each wrestles with personal ghosts from the past.

McLaurin's own experiences as a carnival snake handler helped the writer craft the story.

Reviews of “Snake Show” have been mixed, with some reviewers expressing disappointment in the book, while others have praised it without reservation. McLaurin thinks some reviewers missed the satire, but most readers agree that the right director and actors could turn the book into a highly entertaining movie.

Downright lavish, however, have been reviews praising “Lola,” the writer's long and unusual poem told through alternating voices. Those represent the unspoken thoughts of an omniscient rat snake, a dead farmer, his three children and a hired man. Lola is the farmer's sweet but brain-damaged-at-birth 14-year-old second daughter, who believes her father only sleeps in his grave and soon will arise to play with her again. Some say it is McLaurin's finest work.

“...At a time when most authors are considered only as good as the sales figures for their latest work, it seems wiser to replow old ground than to explore new terrain,” wrote J. Peder Zane, book editor of the Raleigh News and Observer. “All of which make me want to lay a palm-stinging high-five on Tim McLaurin for his grand new book, `Lola.'

“...Although written in free verse, `Lola' is not so much poetry as enriched prose, the spare lines of which assume a magisterial eloquence through the dramatic structure.”

“`Lola,' which is about the loss of innocence in the South, was something I did for myself,” he said. “I just wrote what I wanted to without worrying about what some New York agent or editor thought. Since I didn't have any inhibitions by trying to impress somebody, I think the words came out a lot cleaner and purer.”

Is McLaurin finished battling the odds and surprising people? Not by a long shot.

In 1998 he plans to announce that he will be a U.S. Senate candidate in 2002. Jesse Helms will retire then because of age, and McLaurin believes the state -- and the nation -- needs new leadership.

“People can call me whatever they want -- either a liberal conservative or a conservative liberal or somebody who is out of touch with reality,” McLaurin said with a laugh. “I just think it is still possible in America to get elected without selling the people out by being beholden to a lot of special interest groups who care about nothing but themselves. Even if it's not possible, it ought to be.”

This story has been posted in the following forums: : Headlines; COS - Tunisia; Writing - Tunisia