Marilyn Hynes met her husband, Yaya Badji, when she spent three years in Senegal as a Peace Corps volunteer in the 1980s 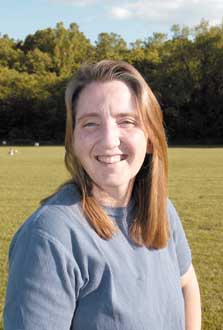 Marilyn Hynes met her husband, Yaya Badji, when she spent three years in Senegal as a Peace Corps volunteer in the 1980s


Marilyn Hynes thinks high school students in the African country of Senegal like hip-hop music, but she's not sure. When she begins teaching English there this fall, she plans to find out what the teen-agers like about America and what they want to learn about it.

"I want to share something of American culture with students over there," said Hynes, a teacher at Lewis and Clark Middle School for four years. "I think that I will offer them an authentic language experience because I'm a native speaker."

Hynes decided to participate in the Fulbright Teacher and Administrator Exchange Program to challenge herself, broaden her horizons, and give her three children an eye-opening experience. She wants them to learn French, the official language of Senegal, and to become familiar with their father's native country.

Hynes met her husband, Yaya Badji, when she spent three years in Senegal as a Peace Corps volunteer in the 1980s. Badji taught high schoolers in Senegal and now works for the Department of Elementary and Secondary Education.

Senegal gained its independence from France in 1960, according to The World Factbook. It is slightly smaller than South Dakota, and about 10.5 million people live there. Only 40.2 percent of them are literate.

"School is an absolute privilege in Senegal," Hynes said. "There are so many villages that don't have schools."

A high school English teacher from Kaolack, Senegal, will take Hynes' place for one year in the exploratory department at Lewis and Clark. Her name is Aissatou Thiongane (pronounced I-sa-too Chone-gan). Hynes will spend the week before school opens with Thiongane, helping her adjust to a new city and school.

Hynes said she appreciates the support of the school district and her fellow teachers at Lewis and Clark.

"Given the quality of the staff, I think this teacher will do very well," she said. "I think they will welcome her."

Hynes probably will work in Senegal's capital city of Dakar. She expects teaching in the modern city to differ greatly from serving as a Peace Corps volunteer in a village of 300 to 400 people.

Called Ndoukouk (pronounced In-doo-kook), the village lacked electricity and running water. Residents cooked over open campfires in huts, but they had a limited supply of firewood. Hynes attended a session on making mud stoves and then taught villagers to make the stoves out of rocks and a mixture of straw and dung from horses and cows.

In a few weeks, the villagers made 30 to 40 mud stoves, which used half as much wood and cooked food twice as fast as open campfires.

"This is just one project that we did, but I think it demonstrates how technology can benefit people," Hynes said, "and I think it's a good example of how the Peace Corps works in a grassroots way."

Hynes visited the village in 1997 and found many improvements. The government had built an elementary school, and the chief's son who lives in France had financed several new buildings, including one with solar panels.

"The village looked really great, despite having a drought for at least two years," she said. "The year I visited they grew nothing. There was so little opportunity to make any money."

Originally from the New York area, Hynes graduated from the University of Virginia with a degree in international relations. In the Peace Corps, she discovered she enjoyed teaching, so after her stint as a volunteer, she went to Columbia Teachers College in New York City. She taught in Kansas City at an elementary school that held all classes in French or Spanish before she became a teacher here.

Leann Meyer, vocal music teacher at Lewis and Clark, called Hynes "a very intellectual person who cares about the education of youth." She said she is excited that Hynes and the teacher from Senegal have an opportunity to teach in another country.

"Students won't just be learning from books or on the Internet," Meyer said. "They will learn first hand from teachers who have experienced the culture of another world."

This story has been posted in the following forums: : Headlines; COS - Senegal; Third Goal

Oh yeah but you guys couldn't even mention her three beautiful children.Me julia the middle child lamine the oldest and sonia the youngest. you know it was hard on us to we have moved 4 times. Sengal wasn't any easier. I still prefer usa .I am now 11 lamine 13 and sonia 9.Me and my sister speak french fluently and I am plannning on going to france with my 6th grade class spring of 2008.It's pretty sure but not completly.Any way thats a taste of the badji kids life the summer of 2007.