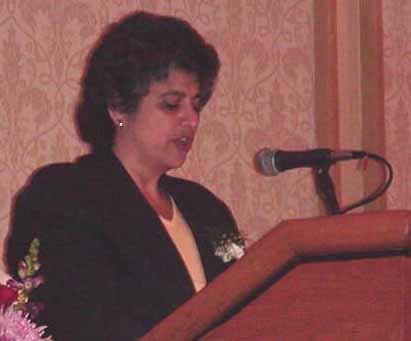 For Immediate Release------Barbara Anne Ferris will announce her candidacy for Congress to represent the 10th District of Ohio on Sunday, June 6, 2004 at 2:00 pm at Ferris Steakhouse, 8700 Detroit Avenue, Cleveland, Ohio. Barbara Anne is the daughter of Josephine and the late Samuel Ferris, a graduate of Lourdes Academy, Ohio State and American University and a resident of Parma.

A non-profit executive with two decades of public policy and economic development experience in over 100 countries, Ferris brings significant public service experience combined with an acute understanding of budgets and finance to this race. A non-profit executive who has created jobs and comes from small business, she has stated her unfaltering commitment to the economic development and growth not only in the 10th District but across Northeast Ohio. She has worked with both village leaders and municipal governments in Africa, Asia, Latin America, Central Asia and the Middle East. She served as a Peace Corps Volunteer in Africa, a volunteer translator at the 1996 Olympics in Atlanta, is co-founder of the Peace Corps Fund, served as the Women in Development Director for the Peace Corps, has crossed the Sahara Desert, and has trekked in the Himalayas, Atlas and Andes mountains. Moreover, Ferris has served as the advisor to the US Delegation to the United Nations and has continued to work with the United Nations in Geneva, Vienna and New York through the International Women’s Democracy Center, an international non-profit organization she established eight years ago to strengthen women’s global leadership. Most recently, 6 high school seniors from the 10th District of Ohio served on the IWDC official Delegation to the last two United Nations Conferences at UN Headquarters in NY.

Barbara Anne Ferris has entered this race with a strong commitment to save and create jobs for the residents of the 10th District combined with a quarter century of a distinguished public service record of innovation, commitment and expertise that is unprecedented.

Barbara Anne Ferris was born the second of five children to Josephine George and Samuel on West 93rd Street near Ferris Steakhouse. Her family moved to Parma in 1955 where she and her 4 siblings grew up. Barbara Anne attended grade school at St. Charles Borromeo School in Parma, high school at Lourdes Academy in Cleveland, she received her bachelors degree from Ohio State University and her Masters Degree in Public Administration from the American University where she majored in finance and budgeting. During her education, Barbara Anne always did volunteer work because she believed that it would guide her in her life work.

Barbara Anne’s grandparents, Adele and Elias established Ferris Steakhouse at 8700 Detroit Avenue in 1941 and they passed it down to her parents Samuel and Josephine. Barbara Anne along with all her siblings, waited tables, tended bar, cooked, peeled potatoes for the famous home fries, stocked coolers, washed dishes and did what needed to be done to ensure not only that the customers had great service, but that they would come back. Today, her brother Bruce and sister Mary Jane now operate Ferris Steakhouse and many of the early customers are bringing their grandchildren in for a good steak. Ferris Steakhouse is getting ready to celebrate their 65th Anniversary!

After working on Capitol Hill as a legislative Assistant for a Member of Congress for 4 yeas, Barbara Anne served as a Peace Corps Volunteer in Morocco from 1980 -82 where she taught English and facilitated basic health education programs for her community. After her Peace Corps service, she continued to work on economic development projects with municipal governments throughout Africa and the Middle East. In between her work, she crossed the Sahara Desert, hiked the Atlas, Andes and Himalayan mountain ranges and yes, she went to Timbuktu.

After receiving her Masters Degree, Barbara Anne worked as a senior executive for the Peace Corps as the Women in Development Director. She also served as an advisor to the US Delegation to the United Nations Commission on the Status of Women for three years. Her work at the UN has continued for nearly 2 decades. In the course of helping to open up new countries for Peace Corps Volunteers, the women of the former Soviet Union had lost their jobs, health care, pensions, and benefits and realized that they needed to learn how to have a voice in the policies which were directly impacting their lives.

Recognizing the need for women to learn the technical skills of how to stand as candidates, how to advocate for issues central to their communities and how to lobby their new legislators, Barbara established the International Women’s Democracy Center, an international non-profit training and education center to meet the needs of women leaders in emerging democracies around the world. After eight years, IWDC is a well known and well respected global training center recognized by both the non-governmental organization community and governments alike for its innovative and results oriented programs, projects and activities.

Throughout her career, Barbara Anne has always continued to do volunteer work and has served as a tutor, softball commissioner, and community organizer and is a member of the board of directors of numerous international non-profit organizations. In 1996 she served as a volunteer translator at the XVII Olympics in Atlanta.

More importantly, as a result of September 11, she Co-founded The Peace Corps Fund, a non-profit organization which was established to provide grants to Returned Peace Corps Volunteers for projects that would educate Americans about the people, places and cultures in the 130 countries where Peace Corps Volunteers have served over the last forty-two years. The purpose of the Peace Corps Fund is to bridge the gaps of cultural misunderstandings towards the goal of a more informed community. She also served as the Chair of the 40th Anniversary of the Peace Corps (2001). Barbara Anne firmly believes that in order to live in a free and functioning democracy, everyone must give something back to their communities.

Barbara Anne continues her economic and social development work with local and global communities and lives in the house where she grew up with her family in Parma. Her decision to stand as a candidate to represent the 10th District of Ohio in the United States House of Representatives is in concert with the depth of her professional experiences around the world, her knowledge of how the federal budget system works and her commitment to the 10th District of Ohio to ensure that we get our fair share of federal dollars (which we are not receiving) to build our economy, improve our education system and meet the most basic human needs of our citizens.

This story has been posted in the following forums: : Headlines; COS - Morocco; Politics; Congress; Election2004 - Ferris

My name is Sonia Burke a Peace Corps Volunteers for four and a half years in Guatemala and a crisis corps volunteer in Guatemala for 6 months. Please send me information on how to become a council woman or something in politics.