Peace Corps will appoint an investigator to look into the disappearance of the son of Leominster Chief Assessor Walter R. Poirier 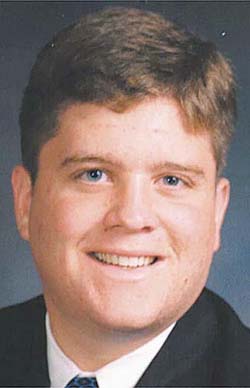 Peace Corps will appoint an investigator to look into the disappearance of the son of Leominster Chief Assessor Walter R. Poirier

Volunteer disappeared in Bolivia in 2001

LEOMINSTER, Mass. | The Peace Corps will appoint an investigator to look into the disappearance of the son of Leominster Chief Assessor Walter R. Poirier from his Peace Corps assignment in Bolivia more than three years ago.

"It's about time," Walter R. Poirier told the Fitchburg Sentinel & Enterprise on Thursday. "Hopefully it will bring some resolution one way or the other.

"We have no way of knowing, and there's always that glimmer of hope," he added. "But right now we need a little bit of closure after three and a half years."

He said he and his wife, who live in Lowell, have been pushing the Peace Corps in efforts to locate their son, Walter J. Poirier.

The nightmare for the Poiriers began in 2001 when Sheila Poirier became worried because she hadn't heard from her son in more than a month. She made repeated calls to Peace Corps officials before the agency even realized Walter J. Poirier was missing.

Poirier's story was one of several highlighted in Casualties of Peace, a seven-part Dayton Daily News investigative series published in 2003 on the safety of Peace Corps volunteers.

The series by Russell Carollo and Mei-Ling Hopgood found that Peace Corps volunteers are sent to live alone in remote areas of some of the world's most dangerous countries and left unsupervised for months at a time.

In the profile about Poirier, Carollo wrote, "On Jan. 31, 2001, Poirier signed in at the Peace Corps office in La Paz, did some shopping and used his Yahoo! e-mail account. Then, evidence, suggests, he went to the Zongo Valley, and there is no record of him after that."

Both the U.S. House and U.S. Senate have initiated reform legislation. Tuesday, Sen. Norm Coleman, R-Minn., who chairs the Foreign Relations subcommittee that drafts Peace Corps legislation, said he expects the Senate to pass a bill that would establish an ombudsman to respond to medical and safety concerns of volunteers, former volunteers and their families.

Such a bill also would require that the agency's inspector general be appointed by the president, rather than the agency's director, and permanently authorize the agency's new Office of Safety and Security, Coleman said.

Leominster Mayor Dean Mazzarella said the Poiriers have been tireless in their efforts to get this investigation launched.

"They thought all along that the whole thing was mismanaged," Mazzarella said. "(The Peace Corps) was making excuses for what happened, when in reality this happened under their watch."

Meehan said it's about time the Poiriers got some help from the Peace Corps in this matter.

"One of the most troubling things about this case is that every effort to find this boy has been initiated by the Poirier family," Meehan said. "(The Peace Corps') handling of this case, frankly, is not something that the government should be proud of."

Barbara Daly, spokeswoman for the Peace Corps, said the agency has been looking for Walter J. Poirier all along. The new effort to bring in an outside person is just going one step further to identify what else can be done in the investigation.

"We want to do everything we can," Daly said. "We want to bring closure to this case, not only for the Poiriers, but for the Peace Corps as well."

Walter R. Poirier criticized the agency as running on outdated presumptions that the world is a safe place.

"The Peace Corps for years has lived in an ivory tower," he said. "They have to learn how to protect their people. They need to be more aware of security."

Sheila Poirier and her sister even traveled to Bolivia in the summer of 2001 to search the Zongo Valley.

Walter R. and Sheila Poirier went to Washington, D.C., this year to testify before a House committee about their experiences in getting the Peace Corps to investigate their son's disappearance.

Walter R. Poirier told lawmakers at that time that the Peace Corps officials were unhelpful and unsympathetic about the situation. He spoke in support of legislation that would add an independent inspector general to bring accountability to the Peace Corps.

"Every agency in government is set up this way — every agency needs oversight, checks and balances," he said.

The House this year passed that legislation establishing those requests.

Meehan said the Peace Corps needs to make up for its mistakes and give some sort of closure to the Poirier family.

"This is a parent's worst nightmare," Meehan said.

"We know that his disappearance is in no small part due to negligence on the part of the Peace Corps," he added. "But we do not know where he is. We cannot rest until he is found. And we cannot give up that glimmer of hope that he may still be alive."