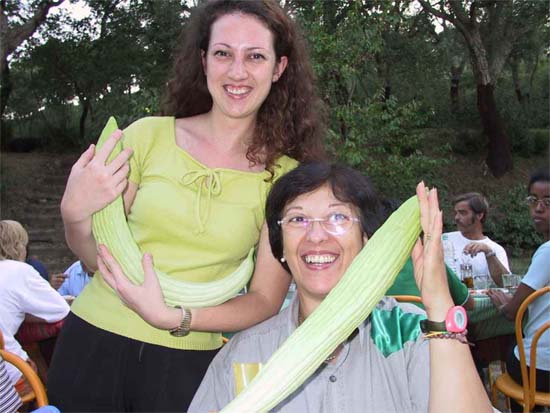 Good Enough To Eat: Be stingy when planting zucchini

By CHRIS SMITH
SPECIAL TO THE POST-INTELLIGENCER

Note: The photo above is not of Ann and Chris Smith - Ed.

If someone put up a "Caution: Zucchini Crossing" sign, I'm not sure drivers wouldn't speed up. The way this vegetable winds up unbidden on non-gardeners' doorsteps has given it something of a reputation. Still, zucchini and other summer squash are part of the summer-eating scene and complimentary and instructional words ought to be said on their behalf.

When I was a lad, summer squash was yellow. It could be straight-necked or crook-necked, but never green like zucchini. My dad put each of my brothers and me in charge of a crop or two. One of my crops was 'Early Prolific Straightneck,' a yellow variety that made an understatement of its name.

My mother used to cook it several ways. We liked it best fried in butter or with bacon and tomatoes. Steamed, then served with butter, salt and pepper was OK, too, though a bit watery.

As an adult, I've grown zucchini, with only an occasional attempt at yellow squash. Ann and I got accustomed to zucchini during our four years with Peace Corps in Turkey. Many of our summer squash recipes come from that time in our lives.

Moreover, the several times I tried to grow yellow squash in Western Washington, it succumbed to a virus. I've never forgotten, though, the slightly different, more intense flavor of yellow summer squash. So when a highly disease-resistant variety, "Success PM," was introduced this spring, I decided to give yellows another go.

I'm trying a different kind of zucchini, too. At a talk I gave to local P-patch gardeners this spring, I made some crack about the blandness of zucchini. Immediately, a partisan of this maligned vegetable informed me that not all zucchini was bland. A ribbed, striped cultivar she grew -- but whose name she couldn't recall -- actually had flavor. She'd send me some seed, so I could prove it to myself. A week later the seed arrived. I planted it with my standard zukes and the new yellow cultivar.

Normally, early June is a good time to plant squash. By then, soil temperatures usually reach the low 60s. This year the latter part of May was warm, and there was nothing to suggest the weather would turn cool and wet for nearly two weeks. So I planted the seed and a few days later began to picture it rotting in the ground.

I was lucky. A few days before warm weather resumed, most of the squash seed germinated, including the new zucchini variety and the new yellow squash. Later this season, I'll report on how these plants have fared.

If you grow summer squash, provide it fertile ground in full sun. Plant plenty of seeds; germination is normally 75 percent and you may lose a few seedlings to bugs and cruds. Don't water until the seedlings are up.

Click to learn more...
I've customarily thinned to 8 inches between plants, but both the cultural information on squash in Territorial Seed Co.'s catalog and Steve Solomon, in his excellent book, "Growing Vegetables West of the Cascades" (Sasquatch, 356 pages, $18.95), recommend two feet. The argument for more space is that plants will be more productive with room to grow.

Speaking of productivity, you can help restore zucchini's good name. Plant only as much squash as you can use or give away to willing recipients. Four plants will provide plenty of fruits for a family of four.

This story has been posted in the following forums: : Headlines; COS - Turkey; Food; Zucchini