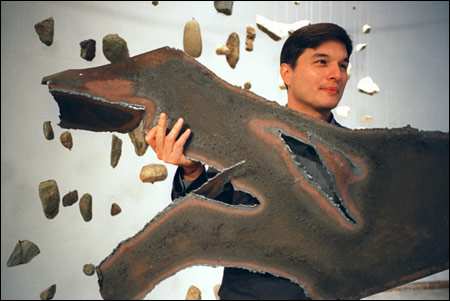 Greg Wong is a 43-year-old diplomat who sits there barefoot, I suspect, because he has worn out so many pairs of shoes.

This University of Wisconsin-Milwaukee grad has had more foreign postings than a French Internet site. He might be the best-traveled Wisconsinite since Jim Lovell.

So it's true he was never going to stay put on the couch in his parents' living room in Brookfield, where his girlfriend is sitting to his left and his folks are serving coffee and pastries and more hospitality than a maitre d'.

But the man could easily have accepted a job near a shimmering beach in Mexico - which, to him anyway, is "close to home." Had, in fact.

What does he do?
Advertisement
Bad Credit? - Click here!

At Iraq's most tenuous and violent moment, he volunteers to go to Baghdad instead.

"I did not exactly want to go to Iraq. It is a decision that I labored over and tried to defer, but it was one that just kept coming back to me and I kept trying to say no to," he said.

In the end, he says of the decision made last winter while he worked on a master's in public administration from Harvard's John F. Kennedy School of Government, he just felt "compelled."

Part of what compels him is the same family he is about to leave behind.

His dad was born in Hawaii and is Chinese. His mom, half French and half Irish, is from the Upper Peninsula and used to teach Latin. He himself worked in the Peace Corps in Burundi, although he makes the community service he learned back at Marquette University High School sound just as relevant.

A foreign service officer, he has worked everywhere from Beijing to Hawaii to Kuala Lumpur, Malaysia, to Hanoi, Vietnam -plus the kitchen of the Lime House, which his family ran for 35 years on Blue Mound Road.

He was also, come to find, once a "traveling underwear salesman" who frequented Peoria, Ill. - and loved it. Iraq will be slightly different.

In diplomatic parlance, he will be first secretary - second in command - in the embassy's commercial section. Along with an Iraqi staff, he will help American companies invest and form partnerships. He will be one of the first to test the effectiveness of a handshake rather than a gun.

"I don't know how much I'm going to get out into the Iraqi community, but I know on a daily basis I will have eight of them I will be working with every day," he said.

It is the sort of thing - globalization - that will, of course, infuriate some. He has friends from as far back as kindergarten who stopped by the other night, he says, "just to hug me." Still, he says, what he is about to do "doesn't feel so courageous."

To him, June 30, the scheduled date of the transfer of power, constitutes "a second chance."

Today, the Wong family is celebrating Walter and Cathy Wong's 50th anniversary. Late next week, Greg Wong will leave for Washington, D.C., for about a month. And then he will head to Baghdad, where he will spend a year.

"I think a big part of what we can do in Iraq is just listen," he said, and expose Iraqis to Americans who can "shake hands and look them in the eye and share."

It's a fundamentally optimistic perspective that might seem Pollyannaish. After sitting down with a barefoot diplomat, it feels instead to be patriotic and hope-inducing.

"I believe in America," he said, "and I believe in the American people and our values, and I think once we can show who we are . . . the progress will truly begin in bridging these gaps and rebuilding their society."

This story has been posted in the following forums: : Headlines; COS - Burundi; Diplomacy; Iraq

Hi Greg, we met years ago in a Travel Agency in Kenya as you were a Peace Corp in Burundi, my name is Jane Nzuki and I now live in Berlin, Germany for the last 11 years, although I shall be going to New Jersey, USA to visit my sick Mom at the end of this month, and stay for atleast 6 months in order to take care of her...please do get in touch, it has been a long time and maybe u can't remember me, but it will be nice to hear from you, was just talking about u 2day with a girlfriend and wondering what became of u...