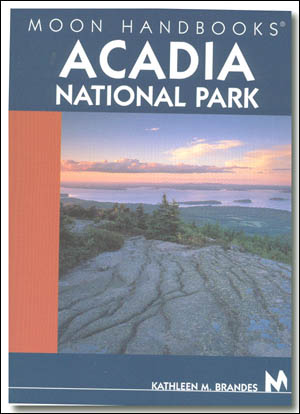 (June 24): Anyone who has ever been to Acadia National Park or ever plans to go knows there is a wealth of information for visitors to the park. Kathleen Brandes, author of the best-selling Moon Handbooks Maine and Moon Handbooks Coastal Maine, has been bringing houseguests to Acadia for 30 years. She has taken the wealth of information from her years of travel there and written the definitive guide to Acadia, the Moon Handbooks Acadia National Park. Kathleen will be talking about and signing her new book at Sherman’s Books and Stationery on Friday, July 2, from 2-3 PM.

Thousands of years before Acadia became the first Eastern national park, Mount Desert Island was already a magnet for visitors. Native Americans spent their summers near the shore—fishing, trapping, and indulging in their own style of rest and relaxation. The dramatic landscape, with both bare and wooded mountains descending to the sea, still inspires everyone who sees it.

Round out a visit by exploring the park’s outlying locales—especially Schoodic Point, Isle au Haut, and Baker Island. Find lighthouses with spectacular ocean vistas, and dine on the docks in surrounding villages, where even the slowest lobster is “fast food.” Celebrate every season using Moon Handbooks Acadia National Park. Summer is by far the most popular, but many natives favor the park in Fall, when sailing winds are optimal and the foliage is brilliant. Winter in Acadia brings cross-country skiing, snowshoeing, and ice-skating.

This edition includes: • An in-depth exploration of the park’s history, geology, climate, flora and fauna • Reviews of restaurants, sights, and lodging in the outlying villages • Details on traveling by bus, car, plane, train, and boat • Fascinating sidebars on a wide variety of topics • More than a dozen comprehensive maps • Invaluable sections on hiking and exploring the park

Kathleen, a resident of Spruce Head since 1974, has been visiting Acadia National Park ever since—to hike the trails, bike the carriage roads, drive the Park Loop Road, and appreciate the wonders of this natural gem, so Moon Handbooks Acadia National Park was logical as Kathleen’s third book. A seasoned world-traveler, she’s lived everywhere from Switzerland to Liberia (two years in the Peace Corps, did an eight-year stint as a marine-book editor before establishing Wordsworth Editorial Services, a one-woman freelance operation, and for a decade, she also was a contributing editor (focusing on Maine travel) for Down East magazine. She is the expert in uncovering the special nuances of this beloved region.

Meet Kathleen and get some real insights into this beautiful Maine treasure.

This story has been posted in the following forums: : Headlines; COS - Liberia; Writing - Liberia