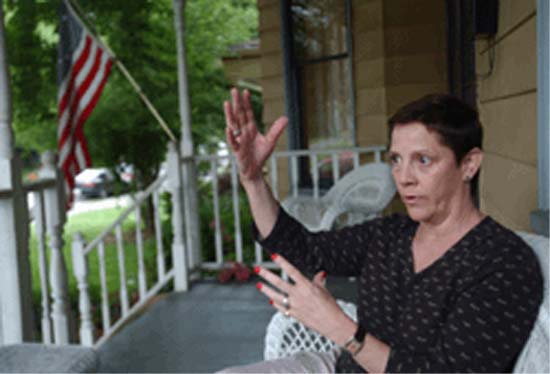 Caption: Leslie Wilson, a native of Beaver, is the deputy director for Save the Children in Afghanistan. The Times Photo / Clif Page

BEAVER - Ask Leslie Wilson what she has missed about her hometown of Beaver, and she doesn't miss a beat.

"It's so green here," Wilson said, gazing out over her old neighborhood from her mother's College Street front porch. "It's been a long time since I've seen this much green."

The lush lawns and trees of Beaver are quite a contrast to the rough and rocky terrain of Afghanistan, where Wilson, 49, has been working as a deputy director for the international aid agency Save The Children since mid-2003.

"It can be frustrating, difficult, challenging," said Wilson, who is home for a brief visit after a year-and-a-half working in Afghanistan. "It's also immensely rewarding."

Wilson's career path took an abrupt turn when she was 35 and working as director of alumni affairs for the Northwestern University Medical School.

"I thought there could be something more, so I dropped what I was doing and joined the Peace Corps as a volunteer," Wilson said. "I spent about two years in Thailand doing work in early childhood education. It wasn't really what I was trained for, but I loved it."

After stints with the American Refugee Committee and the U.S. Committee for UNICEF, Wilson re-joined the Peace Corps, this time as a staff member helping to oversee the organization's operations in Moldova, a state that had been part of the Soviet Union. In 1998, she joined Save The Children, first as a development official in Chicago and then as a country representative in Bangladesh.

Save The Children has been involved in Afghanistan indirectly since 1985, when the organization set up in Pakistani villages where Afghans had fled the Soviet occupation. The group first set up in Afghanistan in 1989, gingerly working around the Taliban fundamentalist government.

Wilson said Save The Children focuses on improving the well-being of children around the planet. In Afghanistan, a country that has been involved in one war or another for more than 25 years, there is plenty of work to do.

"One of the primary things we start with is educating the residents about the dangers of land mines and other unexploded ordinance," she said. "There are still 10 million land mines in the ground across Afghanistan, so that's a real danger."

Save The Children's workers also found that there were other basic concerns that needed to be addressed, particularly as the country tries to rebound from the Taliban regime.

"We found that there little things that turned out to be big concerns for the children, especially in Kabul," she said. "As the level of traffic increased in the city, the children expressed their concerns about safety crossing the roads. We've been able to work with the police to get them to understand the fear associated with all the traffic, and now, every morning, the traffic police are lined up and ready to help people get where they need to go."

Little victories such as that make the job satisfying. Bigger projects, such as improving the educational system, are ongoing.

"We're working to get older students, especially girls, to help tutor first- or second-grade students," she said. "Education for girls wasn't a priority for the Taliban, so that's something we're trying to establish."

The wisdom of American involvement in Iraq is a topic for hot debate; but Wilson said our presence in Afghanistan has had an undeniable positive impact.

"We're still using donations that poured in after Sept. 11," she said. "We've been off the radar for a little while because of Iraq, but there's no question that things are slowly improving for Afghanistan."

Wilson returns to Afghanistan in a couple of weeks, and will stay there for at least the rest of the year. The remaining months of 2004 could be dicey there as elections approach. Wilson said it is expected that violence will increase, and foreigners who are working in the country could be targeted.

But then, she said, that's nothing new.

"It's not something you face every day," she said. "But it is a fact of life."

Michael Pound can be reached online at mpound@timesonline.com.

This story has been posted in the following forums: : Headlines; COS - Thailand; COS - Afghanistan; Service; NGO's