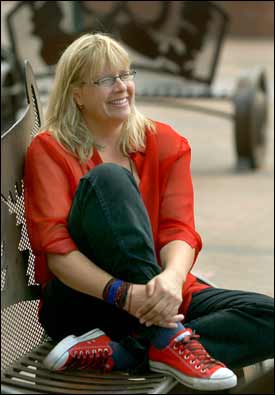 Caption: Canyon Elementary English teacher Jillian Worssam, pictured at Heritage Square Tuesday, will head out on a one-month expedition on the Bering Sea as part of the National Oceanic and Atmospheric Administration's Teacher at Sea program. To order this photo, go to http://photos.azdailysun.com
Buy this photo online!
Taking a page from a book she teaches, Jillian Worssam is spending a month walking in someone else's shoes. Photo: Greg Bryan/Arizona Daily Sun Grand

But this Grand Canyon school district seventh- and eighth-grade English teacher can only walk about 215 feet before she will have to turn around or risk falling overboard.

Worssam is participating in a National Oceanographic and Atmospheric Administration Teacher at Sea program in Alaska this summer.

As Atticus Finch advised his daughter, Scout, in "To Kill a Mockingbird," -- a book Worssam teaches her students -- it is good to walk around in another person's shoes to understand them, and this is the attitude she's adopting for the expedition.

She found out about the NOAA program when she was searching on the Internet for summer programs for teachers. A month on a boat appealed to this English teacher, who also teaches forestry and environmental science classes at Northern Arizona University.

She also liked the fact that it is a hands-on program and is sponsored by a public agency that supports teachers, she said. NOAA pays all her expenses, including the nearly $2,000 to fly her to and from her destination in Alaska.

But she also had her students in mind when selecting the program.

"For me, the huge purpose is showing them they can do anything," Worssam said. "They don't have to be trapped in a small-town vortex."

She said students from small towns do not always realize they can go other places and see such distant places.

Going to the Bering Sea for a month is one example, Worssam said.

"Who would have thought?" she said. "It just blows the mind."

When she was filling out the application, there was a question that asked if she gets seasick.

"I don't know because I've never been on a boat for a month," Worssam said.

Dutch Harbor is in the Aleutian Islands in Alaska, where she will depart Friday or early Saturday on a course for the U.S./Russian Convention line.

The scientists will be trawling for fish -- particularly the walleye pollock -- and taking echo soundings to determine the location and distribution of the pollock. Other data, such as temperature and salinity, will be collected as well.

Worssam's students have become involved in Worssam's expedition. She has incorporated her adventure into lessons for the students. They have measured the length and width of the ship's hull, located the Aleutian Islands on the map, learned Alaska was the other site where the United States was attacked during World War II and wrote letters for the Russian scientists.

Although Worssam is an English teacher, her job is more than teaching just the basics of her subject -- it's about engaging her students through other means. Crossing disciplines can accomplish this goal. Writing about the aquatic species in the region, reading about the geography of Alaska and writing letters to the scientists are all ways Worssam could tie English into the science expedition.

What she learns on the expedition also will be useful in the environmental science classes she teaches at NAU.

Part of the scientific crew will be Russian scientists, Worssam said. In preparation for working with the foreign scientists, she has listened to Russian tapes to learn common phrases, even though she is certain they are fluent in English.

"It is a sign of respect," she said. "I can say things like hello and good morning ... I will try it and not care if it sounds funky."

Although this is Worssam's first research expedition, she has experience learning another language and culture. She was in the Peace Corps for about 21Ú2 years in the Philippines when she was done with college.

Her students are excited about her trip, Worssam said. They want samples of water from across the convention line to see what is in it and a picture of the bathroom on the ship, she said.

They are interested in what it will be like to live on the ship for a month. Once she leaves Dutch Harbor, she will not be on land again. The ship is like a floating community. It has a laundry facility. This is important when planning what to pack. All she is taking has to fit into a duffel bag -- whatever does not fit stays home, she said.

She's also having to plan for items she might not need every day, like aspirin, and deciding how much shampoo to take for a month.

Also, through corresponding with the ship captain, she has learned what footwear to keep at home.

"I can't wear hiking boots because it tracks fish guts," she said.

As a participant in the program, she will keep a daily journal and create a curriculum with what she learns. She also has to publish something from what she does on the ship.

She comes back from the Bering Sea Aug. 11. School starts the following Monday, so she will miss some of the pre-school prepwork, but her school district is being accommodating to let her do the work over the weekend, she said.

She figures it is an experience of a lifetime.

"I plan to learn a lot and experience a new world," Worssam said.

Reporter Sara Kincaid can be reached at 556-2250 or skincaid@azdailysun.com

This story has been posted in the following forums: : Headlines; COS - Philippines; Secondary Education; NOAA; Teacher at Sea Program