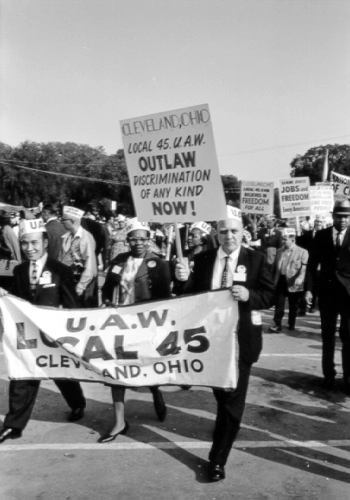 He captured the images that papers ignored

MANY PHOTOS ONLY RECENTLY DEVELOPED

By Linda B. Blackford

In the early 1960s, history could be seen on a nearly daily basis in downtown Lexington.

Down Main Street, more than 200 demonstrators march in a solemn single file to protest the city's segregated stores and restaurants.

On the Fayette County courthouse steps, heads bow in prayer during a vigil by demonstrators. At a department store, a girl sits in resignation at a lunch counter where she can't order.

But those snapshots of local history didn't make it into the pages of the local newspapers, the Lexington Herald and the Lexington Leader. They weren't taken, and they certainly weren't published.

Several historical images do exist on film, however, thanks to a shy, bespectacled high school kid named Calvert McCann. He was a boy who, in his own words, just liked to take pictures.

"If it had not been for Calvert, we wouldn't have a visual record of this moment in Lexington's history," said Gerald L. Smith, a University of Kentucky history professor who found McCann's shots of the local civil rights movement and showcased them in his book on black Lexington.

"I never took a picture of a protest march. I wasn't assigned to do it," said John Wyatt, a photographer for the Leader in the 1960s.

McCann caught the photo bug while working at Michael's Photography store on Main Street, where he was a janitor and film processor. That work also got him interested in civil rights.

"During the summer, they would hire white high school students to work on counter, but they never let me up there," said McCann, now 62. "I always resented it because I knew more about the business than anyone else."

So he joined the movement after work, marching, meeting and sitting-in. With his small Pentax camera and some 35mm black-and-white film, he snapped pictures of friends and strangers who were trying to change Lexington's segregated ways.

He even hopped a chartered plane with Martin Luther King's brother from Louisville for the Selma march of 1965. "That was the most scared I've ever been in my life," he said, recalling the police and others trying to deter the marchers.

But in the years afterward -- after McCann attended Kentucky State University, went to Nigeria with the Peace Corps and returned home as a counselor and social worker -- most of that film sat in canisters in a drawer at his mother's house on Eastern Avenue.

The film's existence came to light only last year, when UK's Smith teamed up with Ed Houlihan, director of the Lexington History Museum, to create a photo archive from the black community. They went to black churches armed with scanners, so they could get the images without taking the photos.

One day, someone told Smith that a guy named Calvert McCann had taken a lot of pictures of the local civil rights movement. The men met, and Smith persuaded McCann to let him develop the film.

Smith came back with more than 100 images. Hundreds more stayed on contact sheets.

The photos capture sharp, vivid details -- formally dressed white and black men, women and children filing past Lexington's busy downtown shops; the determination in the face of Martin Luther King as he headed the march on Frankfort in 1964; expressions of resignation and even some amusement as protesters spent another lunch hour on stools at segregated diners.

"They really are classics," said Houlihan, who has included some of the prints in an exhibit at the Lexington History Museum and said he would like to do another solely of McCann's work.

Now retired, McCann lives in his parents' house on Eastern Avenue. He doesn't shoot many photos any more and certainly didn't think much about the ones he took then.

"I just wanted to document it and tell the story for me and my friends," he said.

A few of his pictures were published in black newspapers such as the Louisville Defender, but McCann never thought he'd be Lexington's accidental historian.
Reach Linda Blackford at (859) 231-1359 or 1-800-950-6397, Ext. 1359, or lblackford@herald-leader.com.

This story has been posted in the following forums: : Headlines; COS - Nigeria; Civil Rights; Photography