Wade Fickler had just returned from serving a Peace Corps tour of duty in Ukraine. Within that former Soviet republic, he had tried to instill some ways of democratic give and take 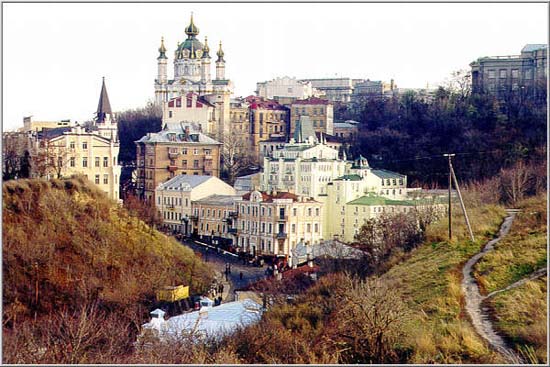 Wade Fickler had just returned from serving a Peace Corps tour of duty in Ukraine. Within that former Soviet republic, he had tried to instill some ways of democratic give and take

At last glance, Bud Brownlow and Bob Ross were about the only ones left.

They amounted to almost the entire surviving membership of the once-grand Portland Americanization Council.

By bus and by train, they would ride downtown with palm-sized flags on sticks and with handouts of "A Welcome to U.S.A. Citizenship," a blue federal booklet with a rippling flag on the front.

Eighteen months ago, these two men, both U.S. Army combat veterans from World War II, were the only two publicly active members left on this nonpartisan civic council. It had formed about 80 years before to welcome Oregon's newest citizens. The council hosted huge annual receptions, and at least into the 1980s, those annuals drew both the mayor and the governor .

Then everyone aged, younger people did not volunteer, donations started drying up and the two octogenarians thought the tradition's end was near.

Yet events took a turn, and here is how.

In late 2002, Portland resident Wade Fickler saw a newspaper story about Brownlow and Ross and their efforts to carry on.

Fickler had just returned from serving a Peace Corps tour of duty in Ukraine. Within that former Soviet republic, he had tried to instill some ways of democratic give and take. As a model for that kind of dialogue, Fickler says, he had used Portland's own City Club. The club described itself in part as a "nonprofit, nonpartisan, education- and research-based civic organization dedicated to community service, public affairs and leadership development" -- goals that fit the work of citizenship.

After returning from the Peace Corps, Fickler became the City Club's research director. And upon hearing of the plight of the Americanization Council, he proposed that the club lend a hand.

He called for volunteers. Tony Larson answered. He introduced himself as a professional mediator, a resident of the Southern Oregon community of Azalea and a member of the Portland City Club. He said he had already started volunteering on his own. He wanted the chance, he says, to keep a great tradition going.

"I thought this is a way to really draw our country together," Larson recalls. "It was a dream match."

In August, the club and a freshly formed Citizenship and Government Committee formally adopted the Americanization Council for a one-year trial run. As committee co-chairman, Larson volunteered to seek and schedule additional volunteers for citizenship ceremonies. Some of those happen on the fourth Thursday of each month in the Mark O. Hatfield Federal Courthouse at Southwest Third Avenue and Main Street.

The committee had a concern, though, with the name itself -- The Portland Americanization Council. To some, Fickler says, it connoted the dated "melting pot" idea of the United States instead of the newer "tossed salad" concept of diversity. Fickler recalls asking Brownlow what he thought about that.

Here is how things stand today:

During the past 18 months, Larson says, he has attended each of the fourth Thursday celebrations with other volunteers.

These volunteers, since then, have welcomed about 2,700 new citizens into the United States of America.

They do this by helping each incoming citizen find the correct place to sit for the ceremony, by responding to questions, by handing out the tiny ceremonial U.S. flags along with the blue federal booklet with the rippling flag on the front, and by collecting voter-registration cards that representatives of the League of Women Voters and the Pacific Green, Republican and Democratic parties hand out.

City Club member Julie Young recalls the day that she and her husband, Bill, volunteered to welcome the nation's newest citizens and voters.

"There was this sheer pride and delight in all of their faces," Young says. "I felt I walked out being a better person."

Since the club stepped up, Brownlow and Ross have stepped aside after about 30 years of helping out.

Brownlow, 83, a retired auto mechanic and the great-grandson of an Irish immigrant, and Ross, 86, a retired city pipe mechanic and the great-grandson of Scottish immigrants, say they now have more time to spend with their families: They each have many great-grandchildren. Ross has 31, and he also continues to volunteer on a recycling route and to serve as chaplain for Veterans of Foreign Wars post 4053 and for VFW District 3.

As for Brownlow, he says he still serves as a VFW Post 4248rifle-salute honor guard for the burials of veterans. Brownlow says what he thinks about the City Club stepping into his former calling.

"I went down a couple times and they were doing such a good job," Brownlow says, "that I never went back anymore."

"Both of us were getting so old," Ross says, "that we figured we'd better let someone else get over there who had more energy."

Now history comes full circle: The City Club says documents from the 1920s list the club as a member organization of the Americanization Council. Today, the council stands under the wing of the club. Larson, 34, stands in for those who came before, and part of that means handing out that blue federal booklet, the one that carries the Declaration of Independence, the U.S. Constitution and "The Five Qualities of the Good Citizen."

New citizens come from everywhere -- from Columbia, Indonesia, Somalia, Laos, Romania, Vietnam, Russia, on and on -- and they warm the ones who welcome them with the rays of spirit that got them here.

"It's just an awesome opportunity. It is my absolute, number-one favorite activity," Larson says. "There's nothing like those smiles and those eyes."

Now he keeps the welcomes alive by seeking more volunteers.

"Whatever pre-existing stereotypes they may have had," he vows, "will be shattered on the spot."

This story has been posted in the following forums: : Headlines; COS - Ukraine; Service; Leadership Development; NGO's