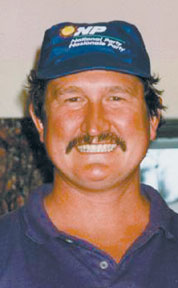 Friends mourn death of former teacher
John Auffrey, who taught in Zeeland from 1986-'90, was murdered during a robbery in Liberia

The bands of text that run across the bottom of news channels telling of Americans killed overseas will never be the same for Zeeland Public Schools employee Mary Ferry.

"He was my best friend," said journalism teacher Bruce Brink, who taught with Auffrey.

Auffrey had worked for the U.S. Department of Defense in Liberia just three weeks before his murder. His death came less than a month before he was supposed to come back to West Michigan to be the best man in Brink's wedding.

Auffrey's wife, Helena Brandt, stood in his place at the June 25 wedding as a memorial to her husband.

"He enjoyed life, and was a good American," said Jo Bird, who worked with Auffrey at Zeeland High School. "He was able to look at himself, and see the good and bad of America."

Auffrey was stabbed to death during a robbery, authorities said. A group of men entered Auffrey's room at the Mamba Point Hotel through a false ceiling after breaking into the room next door and stealing $8,000, according to The Inquirer, a Monrovia newspaper.

Auffrey was born in Ionia, and moved to Colorado when he was young. He received a bachelor's degree from Colorado College in Colorado Springs. After college he volunteered with the Peace Corps in Sierra Leone before coming to Zeeland to teach.

After leaving Zeeland, he moved to Windhoek, the capital of the southwest African nation of Namibia, where he taught and developed an international curriculum for a local school.

Although Auffrey left Zeeland, he still visited the United States each year, either to West Michigan or to Colorado to see family, according to Brink.

"Serving people is what he wanted to do," Brink said.

Although Auffrey had left Zeeland 14 years ago, Brink said he was well remembered. About 18 former colleagues attended an informal memorial for Auffrey the week of Brink's wedding.

"To still be remembered so well speaks to his personality," Brink said.

This story has been posted in the following forums: : Headlines; COS - Sierra Leone; COS - Liberia; Land Mines; Service; Obituaries

Looking for Joseph Auffrey, were you ever employed as a teletype operator at Portsmouth Naval Shipyard in the late 1950's?
Please e-mail me at KJKH2@valley.net