AS a public health volunteer with the Peace Corps, Tomeka Peterson spent more than two years teaching residents of the tiny African village of Naitiri about AIDS prevention 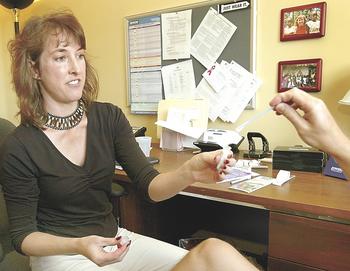 AS a public health volunteer with the Peace Corps, Tomeka Peterson spent more than two years teaching residents of the tiny African village of Naitiri about AIDS prevention

Peace Corps work carries over to area
By Rachelle Treiber

Caption: Tomeka Peterson, a prevention specialist for AIDS Project Quad-Cities gives a mouth swab HIV test to a person who came into the Rock Island office. People do not have to give their name to get tested for HIV. Jeff Cook/QUAD-CITY TIMES

AS a public health volunteer with the Peace Corps, Tomeka Peterson spent more than two years teaching residents of the tiny African village of Naitiri about AIDS prevention.
.
In a country where 3.2 million new cases of the deadly disease were estimated during 2003 alone, she passed out condoms, spoke in schools, at parks and other community gathering spots — doing whatever she could to help educate a group of people who had little to no knowledge of sexually transmitted diseases.

“Some people thought a symptom of an STD was a headache or backache, and other people there actually believe if you are HIV-positive and have sex with a really young person that it cures you,” said Peterson, a West Liberty, Iowa, native and high school Class of ’83 graduate.
.
Many people she met in Africa, Peterson added, had never been taught about the diseases before her arrival.
.
For most of the 26 months between June 2001 and July 2003, Peterson worked while living without electricity, collected rainwater from her roof, had no telephone and no access to e-mail.
.
She took anti-malaria pills once a week and slept under a mosquito net.
.
While the United States was being attacked Sept. 11, 2001, Peterson was thousands of miles away from home, unable to contact her family in eastern Iowa.
.
She learned about the attacks from a neighbor who spoke little English — the only person in the area with a television.
.
Aside from those challenges, she was also the only caucasian within about a 45-mile radius, needed an interpreter to communicate with the people in her village and lived in area where women are “treated as second-class citizens.”
.
Still, looking back on her time in Africa, Peterson said every moment was worth her time because she believes she was “effective” and helped make a difference.
.
In her new job as a prevention specialist for AIDS Project Quad-Cities, or APQC, she is trying to continue her role as an educator.
.
Her qualifications and training have given the nonprofit organization certification to begin offering free, anonymous HIV testing to the public.
.
“I’ve been in this position for 10 weeks, and we were just approved to do this testing two weeks ago after I went for the training,” said Peterson, who holds a master’s degree in social work.
.
“We previously offered no testing in this office, so people had to go to the virology clinic at Genesis Medical Center or to the health department, where it’s confidential but not anonymous.”
.
The difference, she added, is that people do not have to sign their name at APQC to receive the test. They are just given a number.
.
“It’s anonymous and some people feel better about that than having it just be confidential,” she said. “It’s also a cheek-swabbing test, so there is no blood drawn.”
.
As for HIV testing in Africa, Peterson said the government began using the finger-prick method while she was working in Naitiri, but the nearest site was an hour away and the procedure was quite costly.
.
The closest free testing clinic was two hours away and most people cannot afford the trip.
.
“The Peace Corps didn’t do testing. We just educated and worked on prevention,” she added.
.
The prevalency rate of AIDS has actually decreased in some African countries, although Centers for Disease Control and Prevention, or CDC, estimates show that 13 percent to 35 percent of the African population has the disease.
.
“It was different in certain areas. When I first went to Naitiri, which is in Kenya, there was about 13 percent prevalency rate nationwide,” she said. “It was about 11 percent when I left and it’s much higher in other places.”
.
According to CDC estimates, as of December 2003, about 40 million people worldwide had been diagnosed with AIDS. In the U.S., more than 886,575 people are living with the disease, including 250 Quad-Citians. Another 180,000 to 280,000 Americans are unaware that they are infected with HIV.
.
In several African countries, the virus has become the leading cause of mortality.
.
And although the disease appears to be declining in several parts of the continent, including Kenya, southern Africa has the highest rate of HIV in the world.
.
And at least 80 percent of world’s approximately 14 million AIDS orphans are in Africa.
.
Peterson said only education can stop the numbers from climbing even higher.
.
“It’s difficult,” she said. “A lot of cultural practices heavily influence the rate of AIDS, so you have to walk a fine line between respecting the culture and educating them.”
.
Among the cultural practices affecting the incidence of AIDS is polygamy, which is common in some African countries.
.
“Family inheritance is common where if a man dies their brother is willed their widow,” Peterson said. “There also is just a lot of acceptable unfaithfulness there, although it’s slowly starting to change with the younger generation of men.”
.
Another element of the problem is that 56 percent of the African population lives in poverty, and while 85 percent of the children attend elementary school, only 22 percent to 26 percent go on to high school.
.
While African governments provide free condoms, they rarely are distributed in places like Naitiri, which is more than an 11-hour drive from the nearest large metropolitan area.
.
Even if they were distributed to small villages, “men, for the most part, won’t use them,” Peterson said. “And women would not be able to ask that of their husbands.”
.
Looking back on her time in Naitiri, Peterson said that although she is happy to be closer to home, she plans to return to Africa someday.
.
“I loved it. And leaving was probably the hardest thing I’ve ever done,” she said. “I will definitely go back there.”
.
As for the people, whom she misses terribly, Peterson believes she gave them the education they need to lower the prevalency of AIDS in the village.
.
Several months after teaching her first group of 12- to 18-year-old students about AIDS and unprotected sex, a teacher told Peterson she had to return the following year because it was the first class she’d had with no dropouts due to pregnancy.
.
And Peterson hopes to see how the people of the village have used their newfound knowledge the next time she visits.
.
“I taught classes all the time. I even got into Catholic churches and even used the word ‘condom’ there. Some of the people I taught came once a week for six to eight weeks, and they would bring friends,” she said. “That’s what told me I reached them. That’s how I knew I was effective.”
.
.
Rachelle Treiber can be contacted at
.
(563) 383-2363 or rtreiber@qctimes.com.

This story has been posted in the following forums: : Headlines; COS - Kenya; AIDS; AIDS Education; HIV