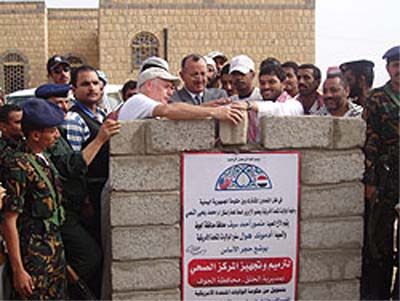 Yemeni prosecutors have charged 15 men with plotting to kill Edmund Hull, a former Springfield resident who is now the U.S. ambassador to Yemen, Reuters and other news organizations have reported.

The plot came to light when five of the men were charged in May with involvement in the bombing of the French supertanker Limburg off Yemen in 2002, according to the reports.

"He did forewarn us about a month or so ago that it might cross the news wires and not to be alarmed," she said of the plot.

"He said it was old news," she added. "The threat had happened several months ago."

Reuters reported that 15 men had planned to assassinate Hull to avenge the U.S. killing of an al- Qaida leader in 2002. A CIA drone aircraft killed the leader, who was suspected of responsibility for the bombing of the USS Cole, which killed 17 American sailors in Yemen in 2000.

Hull is scheduled to leave Yemen for good later this month, his mother said. He is retiring from the Foreign Service and will teach at Princeton, his alma mater, she said.

Having a son in Yemen can be nerve-racking, his mother said, "but when he contacts us, he doesn't sound the least bit disturbed."

Born in Keokuk, Iowa, Hull moved to Springfield when he was in fourth grade. He graduated from Griffin High School in 1967.

He went on to graduate with honors from Princeton University's Woodrow Wilson School of Public and International Affairs. He served with the Peace Corps in Tunisia after college and joined the Foreign Service in 1973. He speaks Arabic and French fluently.

Hull also has worked in Egypt, Israel and Tunisia. He is married with two grown daughters.

This story has been posted in the following forums: : Headlines; COS - Yemen; COS - Tunisia; Diplomacy