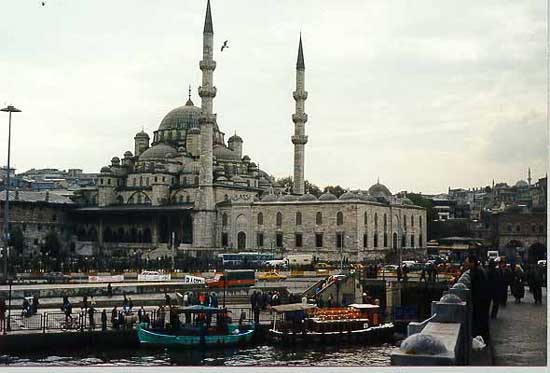 Hasan Arslan of Turkey attended his first bar mitzvah. Titis Andari of Indonesia threw the shot put and discus for the track team at San Jose's Prospect High. Youssef Atwan of Egypt relished the chance to engage Americans about the war in Iraq.

The three students flew back home this month, full of stories to tell about a country they had only known from television and movies.

They were among 160 students nationwide to participate in the inaugural year of Youth Exchange and Study, a post-Sept. 11 State Department initiative to foster cultural understanding between Americans and youths from predominantly Muslim countries.

Youssef, 17, said he came away from his year at Mountain View High School with an overwhelmingly favorable impression of the United States, a country he had known only through television and movies before he won the scholarship that brought him here.

"I could feel myself changing throughout the year, growing up," he said Thursday from Washington, D.C., where he and the program's other participants spent their last days in the country meeting members of Congress.

What most surprised Youssef about America was the variety of cultural backgrounds and political persuasions, he said. "That's not the case in Egypt. It's one race, two religions: Christian or Muslim."

Despite the diversity, Youssef said he encountered a surprising amount of ignorance about the Middle East.

"Some people asked questions like, 'Do you live in a pyramid?' and 'Do you go to school on a camel?'" Youssef said.

He would respond patiently, with the empathy of someone who had once based his view of America on teen movies like "She's All That."

"My personal hope is that as a culture we learn who these people are so we can break down barriers with Muslim countries," Hagewood said. "The war in Iraq and the whole thing going on in the Middle East has to do with not understanding their culture, and vice versa."

Overseen by the State Department's Bureau of Educational and Cultural Affairs, the program uses a competitive application process to single out high-achieving students who have the potential to become leaders in their countries. The program is part of a $10 million youth initiative to promote understanding of American goals and values in the Muslim world.

The program is expected to triple in size in its second year, with more than 400 students set to arrive in the United States in August, including at least three in the Bay Area.

Andari, 18, said she initially worried that her background and her head scarf would make life difficult for her at Prospect High School in an environment that she assumed would be all-white. She quickly discovered that the student body was dizzyingly diverse and "so relaxed and so easygoing."

She said she felt comfortable enough to dive into the school's extracurricular life, joining the mock trial team and track team. And she finished with straight A's, fourth in her class. Arslan, 18, who studied at Los Altos High School, also experienced anxiety when he first arrived in Los Altos, where the host family that greeted him was Jewish. The next morning, he attended a bar mitzvah.

"Here's this Muslim boy who's never been outside his home country," remembered Sheri Morrison, who hosted Arslan for his first week. "Talk about foreign.

"At the end of the day, he said to me, 'This has been the most interesting and exciting day of my life.'"

As he prepared to leave Friday, Arslan said he was looking forward to sharing his knowledge of a country he had long dreamed of visiting.

"Before I came here I was told that the United States had no problems because it is the most powerful nation in the world," he said. "When I came here, I learned that the government was in debt, people were in debt. Because of that I was surprised."

This story has been posted in the following forums: : Headlines; COS - Turkey; Youth; Cross Cultural Studies