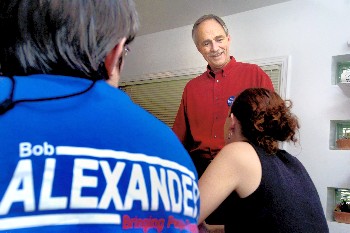 Two Democrats face each other in the five-county 8th Congressional District, but neither calls the other an opponent.

Bob Alexander of East Lansing and Matt Ferguson of Lansing say they are united in two goals.

The first to beat incumbent U.S. Rep. Mike Rogers, R-Brighton, and the second is to help bring down President Bush.

Although Alexander and Ferguson face off Aug. 3 in the Democratic primary, they are cooperatively competitive. They even held a friendly joint fund-raiser.

"Absolutely, our top priority is to make sure Michigan supports Kerry and Edwards," said Alexander, 59,a former teacher and legislative aide in the Senate.

Although Rogers won the 8th Congressional District in 2000 by just 111 votes, redistricting in 2002 made the seat considerably more favorable for Republicans, contributing to his win with 60 percent of the vote.

Ferguson, 27, a former radio journalist, said he decided to run because "it was the right thing to do" no matter the odds.

Ferguson has gained attention by twice walking 100 miles or more on campaign trips through the district, which includes Livingston, Ingham and Clinton counties as well as portions of Oakland and Shiawassee counties. Ferguson is new politics, although he did volunteer for some campaigns while still in high school.

He wants to renegotiate trade agreements to make sure they are fair for American workers and wants international help in stabilizing Iraq. He said he's been accepted into the party structure since quitting his job to run against Rogers and thinks the seat is winnable.

"I think (Rogers) is taking the district for granted," Ferguson said. " A lot of our success is going to depend on how successful John Kerry is."

Alexander said he has the experience necessary to beat Rogers. He worked for 15 years on health policy for the state, organized a statewide network to oppose war in Iraq and served as an analyst for the state Department of Social Services.

Alexander has harsh words for Bush and links Rogers to all of the administration's faults as he sees them.

"The Bush/Rogers way is a disaster. They are out to destroy Medicare," said Alexander who also wants to reverse Bush's tax cuts for the wealthy.

Alexander said he has helped with more than 200 campaigns during his decades of political activism including Frank McAlpine, who challenged Rogers in 2002.

Alexander and Ferguson have pledged to unite after the primary and bring all Democrats together to oppose Rogers, as well as any independents and Republicans they can convince.

"2004 is going to be an election unlike any other," Ferguson said. "We could really surprise a lot of people."

# Family: Married with three children and one grandchild.

This story has been posted in the following forums: : Headlines; COS - India; Politics; Election2004 - Alexander